It's Monday and I still have the mojo blues, oh well!  I will have to wait for it to come back.

I had work today, everyone was in the doldrums, so I felt better that it must be the awful weather we have been having the last couple of months.  Now it seems even Australia can't escape the floods, so awful for everyone in which ever country is involved.

I saw a film the other day that had the moon hit by a meteorite and it caused the moon to split, the world had horrendous weather as the moon had tilted off balance, of course they were able to close the split with dropping a nuclear bomb in it, which caused magnetism of the iron in the Moon to correct everything itself! Perhaps that's what's happened to the moon and why we have such awful weather all over the world at the moment?  NO I'm not mad, well only a little, but I do love Sci fi and the improbability that the stories are. LOL 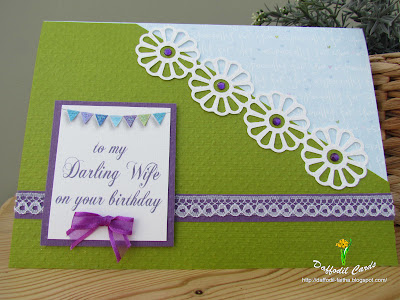 Anyhow on to a card I made last week.  As I said no mojo, so looking through my cutting files I came across this pretty Daisy file by Krewella Kreations Here  I was also lucky as Leza had a photo as an example, so I cased it, (for some reason I have gone to her blog and she has a different example!) this is the one I cased

I chose a colour scheme from the file I chose for the bunting and the inside, Pretty as a Peacock by A-Manda Creations, I'm not sure of the front colour, I think it's the green card, perhaps if I had put more of the turquoise corner paper by Pink Petticoat it says especially for you through it.  The green and purple card is Bazzille embossed card.  I'm glad to say he liked it, but there what do men know LOL.

(PS. I hope they will be on their way to repair the Moon soon!)

Lovely card Faith and nice colour scheme.
(I hope they mend the moon too !!)

Well, for someone who's mojo has gone walkabout, you've certainly made two lovely cards here!

You are one crazy woman which is why i love to visit your blog, well that and your super cards, but you do make me laugh.Love the card and the colours are fab just my cup of tea. I will be staring at the moon tonight !

I hope they can get the moon repaired soon too! In the meantime, we better watch our steps! Love this card, the colors, the layout and that pretty chain! Your mojo seems to be intact!