Hope everyone is having a sunny day as we are, it makes such a difference doesn't it after all the rain we have had.  Luckily I have had a weeks leave, I couldn't have picked a better week. Yipee!

On to my card, I have followed the Less is More sketch for it.

The digi stamp is by Bugaboo, I coloured it in PS, the digi paper is Happy go lucky paper dots by Shabby Princess, I cut the scallop dot border (I cannot find by who - sorry.)  The ribbon is from Fantastic Ribbons, Then added the Stickles to the bow and pattern on the shoe, well I had to have a little bit of glitter LOL.  The font is MacBootHmk 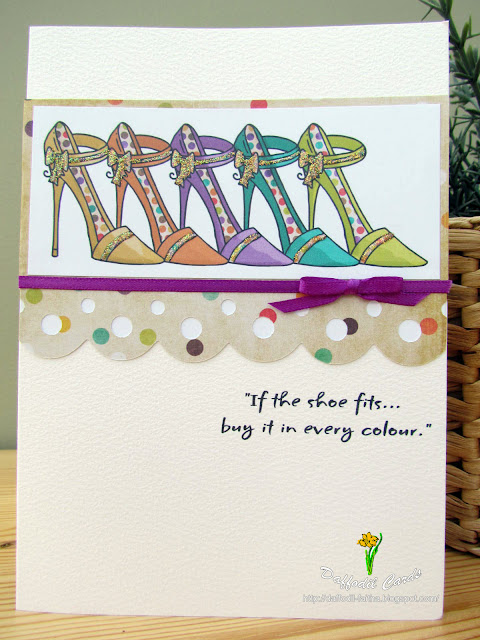 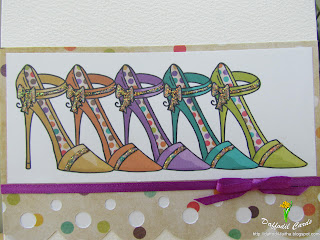 I shall enter the following challenges


I couldn't make my mind up about the kind of card I wanted to do, I had a few goes, here they are in their "raw" form so to speak.  What do you think? 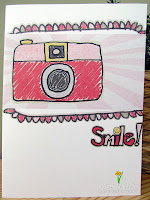 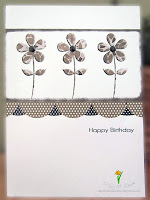 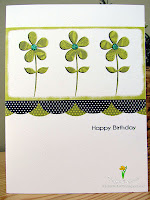 The flower on both first and second card is by Sweetclipart.com I have used a mask in PS to add the paper to take the shape of the flowers, the paper in the first is Memory Lane by Trueman Studio. The second is Limeade by Summer Driggs. The scallop on the first 2 cards are a shape I made myself and added, by a mask in PS, Pink Petticoat Little polka dot papers.  The camera, paper and frame are Take my Picture by justjamie at Digichick.

A card for a challenge (challenges) I picked up on Feline Playful, and fancied the challenge!

The sketch I followed is MTSC79 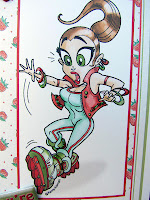 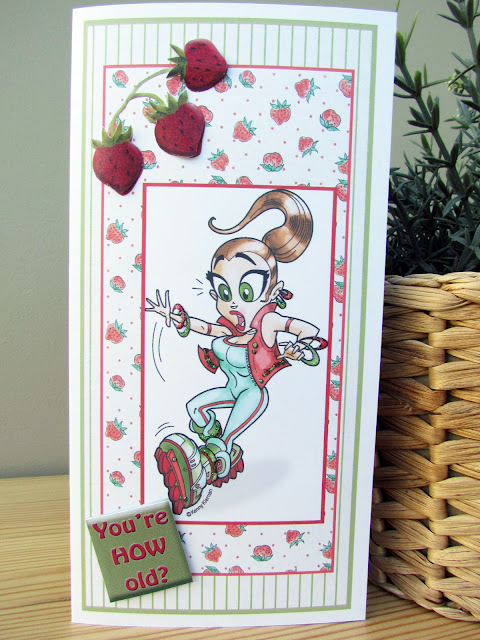 I entered my card in the following challenges

A VERY quick post, we have visitors coming, but had to enter the Less is More challenge this morning, as I love this image StellaSew from Bugaboo stamps.  The stitching is an action in PS from atomic_cupcake, the quote I found on the web, which says it all really LOL. The digi paper in her hat is a patchwork paper, shame you can't see more, from Danielle Engebretson Designs at Digichick. All the card was done in PS. 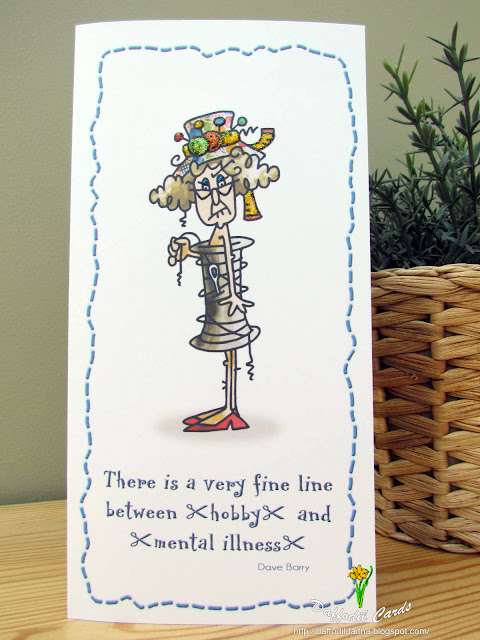 http://thepoodlesparlour.blogspot.co.uk/  Use a Digi
Posted by Faith A at Daffodil Cards at 13:05 37 comments:

Another quick post, hopefully will be able to catch up and show more in the not too distant future. I will try and post a card or two though.

I have made this card with a ready coloured digi, (I have changed the colours slightly to match the colours of the paper, in PS) from Charmed cards and Craft called Chill time, isn't he cute? the digi papers are by Summertime Designs, I cut the border from a cut file by Birds Cards to match the zigzag paper, I thought so anyhow. 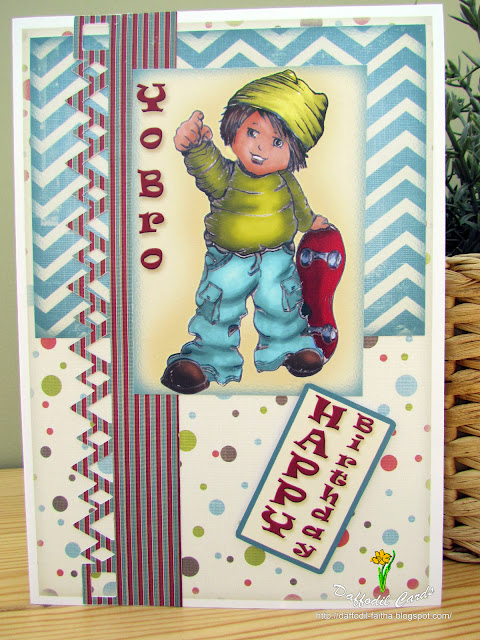 I shall be entering the following challenges

http://nutcrafters.blogspot.co.uk/     One for the Boys

http://thesisterhoodofcrafters.blogspot.co.uk/         Hear it for the Boys

http://dudetimedoodles.blogspot.co.uk/2012/07/july-inspiration-challenge.html     Anything goes as long as it's for a Dude.

Firstly, I am apologising again for the lack of comments, I hope to be back on track soon.

This weeks challenge at Less is More is Gold, not yellow, but GOLD!.

Here is my offering.  It's a second card for me on the same theme, I was asked to make a card from the department I work in, to make a card for man who got married abroad he'll come back to work married and to a party that quite a few of the staff are attending.  I made one and then decided that it may not be suitable, you know the feeling, will it be just me who likes it?, well I made this card as a second offering if they didn't like the first.  I'll post the first card later in the week if I can.  I decided on the Mr & Mrs rather than to the bride and groom or on your wedding day, as of course they will be married when they receive it.

I used Mandi's colouring suggestion for the gold text (which is "Rage") and printed it out, then printed a second layer wholly in the same gold to layer the text onto. I strung gold twine? around the layers and because the twine and the printing were different colours I used the shiny mirror card in a heart to match it, I embossed it curly to match the text. I thought maybe the Mr & Mrs would stand out more being slightly darker, I hope!

Just realised the layers look on a slant, they are NOT - honest, don't know why it shows as such here. 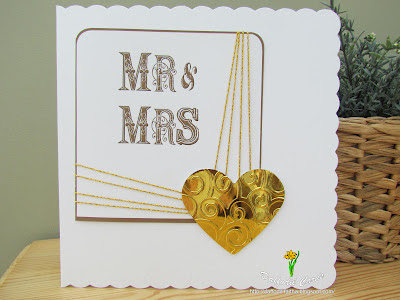 I am entering these into the following challenges


http://unstampabelleschallenges.blogspot.co.uk/      Celebrations Any form of paper creation will be accepted as long as NO STAMPS (Digital or Rubber) have been used (this includes sentiments).

header as the inspiration for this challenge.


Well I have had a go and found a frame from a freebie I downloaded from Craft-tastical, then searched for something to do with music in my files and came up with the violin and it's quote from Create with TLC and the Music speaks quote I have saved in a file called "quotes", for some reason! with no idea from where, anybody know? so that I can give credit.  The only thing it has been saved as 2-14-11 Music, which would have been the original file name. I wish artists would add something  to identify the file, so that people like me who file things and then forget to rename them would always know who did the drawing or whatever.

I have 3D'd the violin quote and the violin and added Glamour Dust on a few of the scrolls of the frame.  All done in PS. 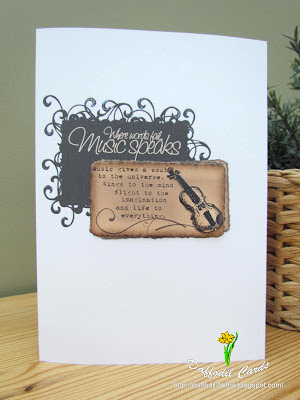 I am still way behind in commenting, have got through a couple, at least when able, I am seeing blogs through email following, so I am able to keep up but not saying so, very sorry folkeses.

The challenges I will enter are
http://simplylessismoore.blogspot.co.uk/2012/06/week-74-lucky-dip-and-guest-designer.html
Header as Inspiration

Last week I was asked if I could do a card, as one of the men who is a nurse in the Recovery Dept in work, was going to Austria and it was his last day in work the next day! The brief was Iron man from the cartoon story, as the recipient was doing the 2 mile swimming, 112 mile cycling, and a 26 mile marathon Iron Man challenge. I was asked for "nothing special," just get the cartoon Iron man and Austria 2012 on the card, as he had kept it to himself until the last minute.  The most unlikely man ever you would think could do something like this and he had been in training for 2 years for it.

Anyhow, I downloaded a picture of the Iron Man, an Austrain Mountain scene, and a sillouette of a man doing the challenge.  In PS I put the mouintain in the background, emboss and highlighted the sillouette, added the text.  I was in 2 minds whether to add his name here, but thought perhaps as he had kept it quiet, he may not want it here.  I was told he was really pleased with the card, I didn't see him as he was on a late shift. 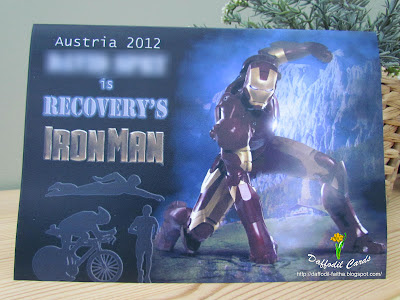 I am going to add this to the following challenges

http://pileitonchallenge.blogspot.co.uk/        For the Guys - Sports