AND THE WINNER IS -

I had a fun day yesterday with everyone in work laughing at me with my T shirt, of course I wore it! then congratulating me on retiring and saying see you Monday, a few of us girls went out to lunch in anticipation of future days! They did me proud, I am such a lucky "girl" to have such lovely people around me, I even had the office decorated, with Congratulations banner and some great old people sayings, like "I laughed so much tears ran down my legs" a bouquet, balloons, more presents, a voucher and cash for me to buy "crafty stuff" all this and I go back on Monday for 2 days a week. A bit embarressing really, but my gosh did I enjoy it, such a WONDERFUL day, thank you girls for ALL your efforts.  It made me feel really special.
AND of course THANK YOU ALL  for joining in. 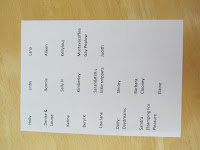 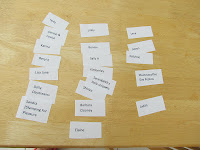 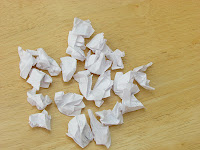 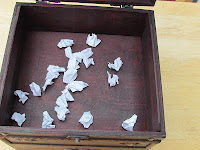 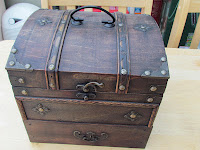 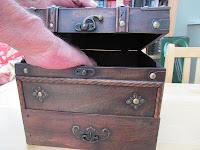 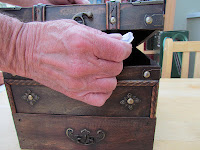 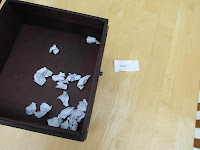 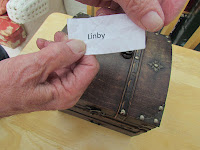 CONGRATULATIONS Linby, hope it all pleases you. if you could send me your address your prize will be in the post on Monday a nice little parcel for Easter :)
Posted by Faith A at Daffodil Cards at 13:28 8 comments:

Hi Everyone and most of all my most faithful followers.
Just wanted you to know, I am a true Senior Citizen 65 years young as of midnight tonight 8th March and I shall be semi retiring at the end of this month (March) hopefully to give me more time to post comments and visit your blogs more often. In celebration of my semi retiriement (not my birthday, as I celebrated at 60, I also received my State pension and bus pass then) now this birthday is another day, OK not quite LOL.

I shall be offering a little candy in celebration of both occasions, so everyone who comments here (I'd love you to follow) will be entered into my little draw, my Hubby shall pull a name out of a hat at the end of the month, (when I reduce my work hours) so plenty of time to comment (or follow).  I can't tell you what it will be as I haven't got it yet!  BUT I will make it worthwhile and will add it to this post later.

Thank you all for the inspiration and encouragement I have had, it really has made a difference.

I promised I would make it worthwhile, well here it is, ALL brand new.  I hope that what I have chosen will be helpful in your particular way of crafting. 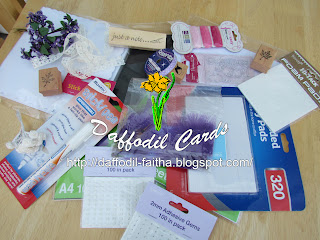 Just one more day girls and the "DRAW" will take place, I hope that the one who wins, and it will be an honest drawer I promise, will enjoy all I have for her.  Good Luck everyone.

NOW for the T shirt I am wearing tomorrow, the LAST full working week, I am so excited, however I am going back to work for a couple of days a week. I really don't feel like I could finish work yet, I'm just glad I have a choice, as there are some who don't. 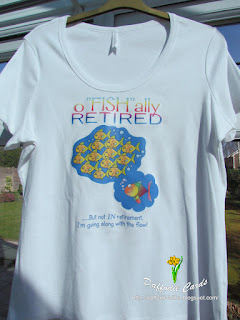 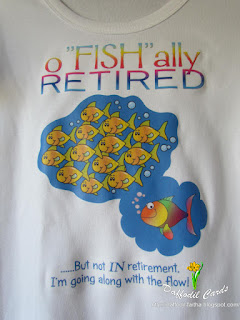 All done in PS originally, then ironed on the T shirt with paper from Crafty Computer Paper.  The "O fish ally retired" is from TLC vintage and I have used a gradient to make it colourful, the school of fish is from Carson Dellosa Clipart, the single fish I copied from the web and now can't find it to say who it's by.  I put a speech bubble behind it to match the other fish then added the quote, part mine and part someone elses? The T shirt is from M&S.  It looks big, 'cause I'm BIG!!!!!

I can even enter this T shirt for a challenge on
http://craftuscrazy.blogspot.co.uk/2012/03/challenge-24anything-but-cardaltered.html
Anything but a card

http://creativecraftchallenges2.blogspot.co.uk/          Anything but a card
Posted by Faith A at Daffodil Cards at 22:40 7 comments:

I was told my soon to be 9 year old great nephew had started playing rugby, he is such a gentle boy I didn't think it possible for him to be in a middle of a scrum.  Then his mother told me he had been in the middle of the pitch looking around at what was happening and all her shouting to join in and get the ball fell on his deaf years, he looked down and realised he had muddy boots and proceeded to wipe the mud off.  I laughed my head off, so decided he just had to have a rugby ball on his card.

This is what I came up, the ball is off the web, I made it into a digi paper to cover the nine shape, then as I was making the goal posts I realised that they are in a H shape, so apt as his name is Harvey. I then made it bigger and put the 9 overhanging the cross bar, the background paper is Happy Birthday Harvey copied and repeated over the background I used a gradient on it to match the colours . I then printed them directly onto the card, the ball which I had added his name and age is placed onto the card with a spring, so it moves, hopefully like it has just crossed over the cross bar.  Quite a simple card really. 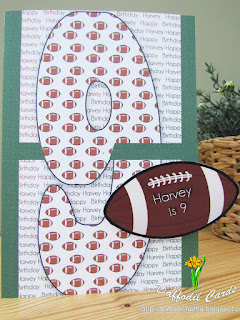 Now for my second card - you wait for ages and 2 come together! LOL

I was asked to do another of my age cards, it had so many items to be included I didn't think I could include them, at the end I couldn't but only 2 out of about 11 items to be included on the card!!!
Firstly it's for a man born in Ireland who is a carpenter and had a Free Mason links and has a dog however, a senior moment has made me forget which breed for now!!

I started with putting a picture of wood, from the web, as a background then making a digi paper of shamrocks and the Free Mason badge and covering the 6 and 0. I then used an image of an Irish fiddler to add to the front, the original, by Jeriann Sabin in her collection of Celtic Irish from PC Hugwear. is originally all brown, but it didn't look right for this card, so I recoloured it in PS. I added the name and used a gradient to get all the colours into it to match the rest of the card.  I added some cord to the edge, made into slip knots, that I know some carpenters use. and also added the FreeMason badge on top of the 0.
I am glad to say it was very well received by the recipient. 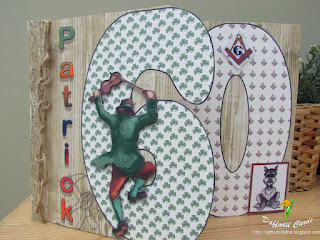 Sorry my posts have  a few days in between, but hope from the end of next week Whoooppppeeeeee I should ahve a little more time.  UNLESS housework and decorating don't take up too much time as my husband decides that he can leave the cleaning now to me LOL - as if!

IF you have made it to the end of this post, NOT LONG NOW FOR THE DRAW :)
I shall be entering these cards into the following challenges. 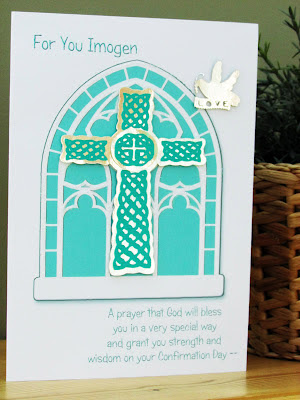 A VERY quick post,
I was asked to do another confirmation card, so I used my Cricut and a Penny Duncan Celtic Cross SVG file to make this simple card adding a jpeg from a cut file by Fam_bjork and a cut file for the dove, I can't find it in files at the moment, will update when I find it, I used the lower layer only of it.  The Aqua colour card is Papermania. The free quote was off the web.

Hi everyone, too busy these days to catch up, when my hours are reduced I promise to give you more time, I have said I will have plenty of time?????

Anyhow, I want to thank Shirley of Shirleys cards who has sent me a lovely award named the

The idea of the award is to draw attention to blogs with less than 200 followers and  pass the award on to 5 other bloggers all in the spirit of fostering new connections.

The rules for the award are :-

1. Show your appreciation to the person who gave it to by
thanking them and linking back to their blog.
2. Post the award to your blog.
3. Give the award to 5 bloggers (with less than 200
followers) that you appreciate and follow.
4. Leave a comment to the 5 bloggers to let them know you
have chosen  them for the award.

There were quite a few more I could have included who need a little promotion of their fabulous work, but I was only allowed 5, sorry girls. My apologies too if you have exceeded the 200 followers, you all deserve to have more, so hope this helps if you haven't.
Posted by Faith A at Daffodil Cards at 22:09 2 comments:

WOW what a response to my candy, thank you, just a couple of weeks to go, didn't think it was that long at the time of posting, perhaps I should draw a little earlier? We'll see?

I have done a few cards, but will post one I did yesterday.  It's a New Home card I was requested to make, I've used Pink Petticoat Black Dots for the background printed onto the card, and black Papermania card with matt gold from The Range for the wording.  I downloaded a car and key SVG from the web, then used the keys 1, 2 , 3 and keyhole, an SVG file from the web, but I can't find where they are from - sorry.  Added a ribbon and a heart, symbolic, "home is where the heart is" hope you like it.  I took the photo at night, so it's not quite the right light. 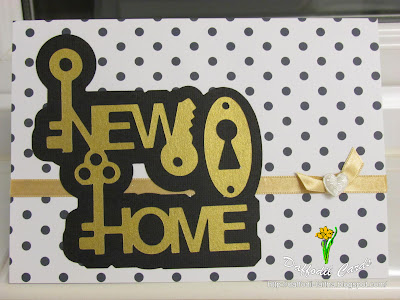 I needed an adoption card for a work colleague, she is about to have another little girl of 18 months old. I have just won 3 digis by Karens Doodles through my 3rd prize on Send A Smile 4 Kids Challenge Blog and I chose this image "Peekaboo" amongst my 3 fabulous digis. I used a sketch which has been a favourite one of mine from Melissa Craig at Tuesday Morning Sketches but made it into a square instead of vertical. I used Pink Petticoat papers and made background squares to match around the papers and image, I also coloured the image in PS and printed it all out on Cuddly Buddly Eggshell glossy card. I punched the border with Martha a Stewart punch. I bought the 8 x 8 card in Hobbycrafts. The ribbon is by Papermania.

I just realised I have kept a few companies in business with this little lot LOL. Here's the card - 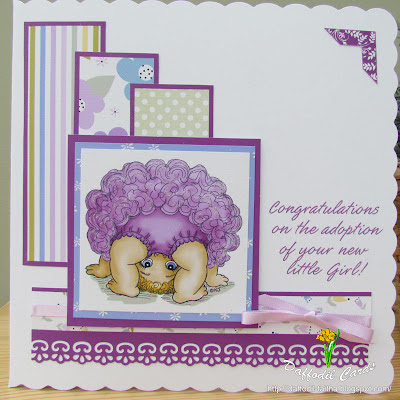 I am entering the card into the following challenges

http://polkadoodle.blogspot.com/ Polkadots Stripes or Both