Hi Everyone, life has taken over and I am having a slight break from blogging, time is of the essence for me, please accept my apologies for lack of visits to you. - BUT, my DT post today is for the - 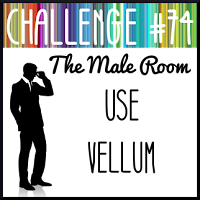 I had a a lot of ideas, but one came back to me time and time again and it's this Penguin Lantern (battery tea light holder.) I used a file from the Silhouette store cut it from black card then attached it to a piece of vellum, OK very simple, BUT who said the challenge had to be difficult? Although my Teamies have produced some superb work, go take a looky and why not join us.

I've taken the photos at different angles to show the different sizes of the penguins and the fact I made it big enough to hold 2 battery tea lights, hubbies younger nephew loved it. It made it worth while. 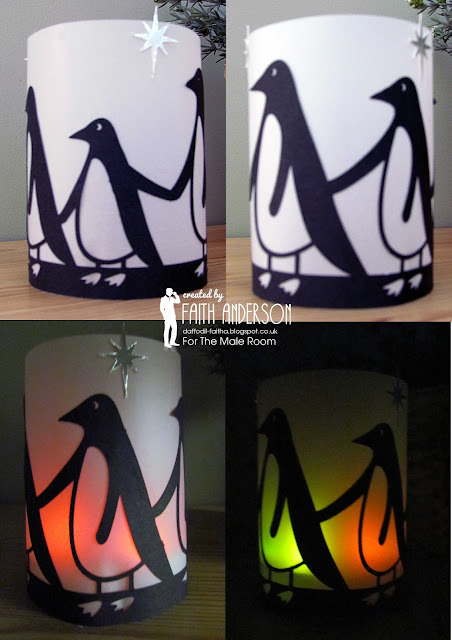 I'll be back in a few days - hopefully to show what I have been doing, if life allows!
Posted by Faith A at Daffodil Cards at 09:00 14 comments:

Hi Everyone, another Christmas card today, I have to get going, just another 50 odd to go. This is one I did last week. I have about another 20 odd local cards to go and they have to be done soon, to take advantage of cheaper post from the Scouts who deliver at Christmas time. No pressure of course and a few December birthdays and visitors - no pressure in the next couple of weeks LOL.
Sentiment - Create with TLC
dies - freebies in a magazine
dp - Stitchy Bear Night skies
mirror card star - cut with Silhouette Cameo
coloured snow, house and trees with Spectrum Noir pens
bronze foil paper behind windows 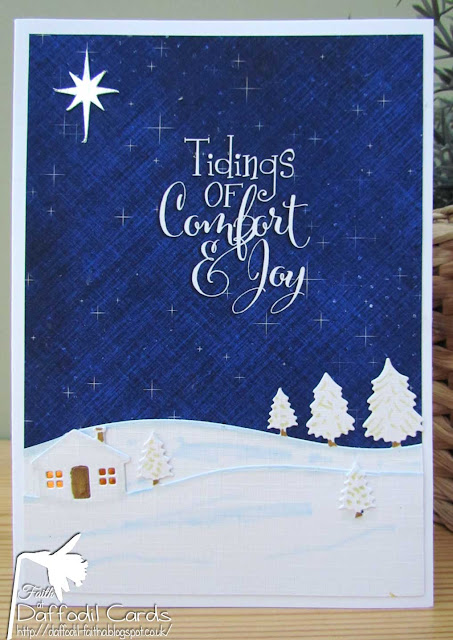 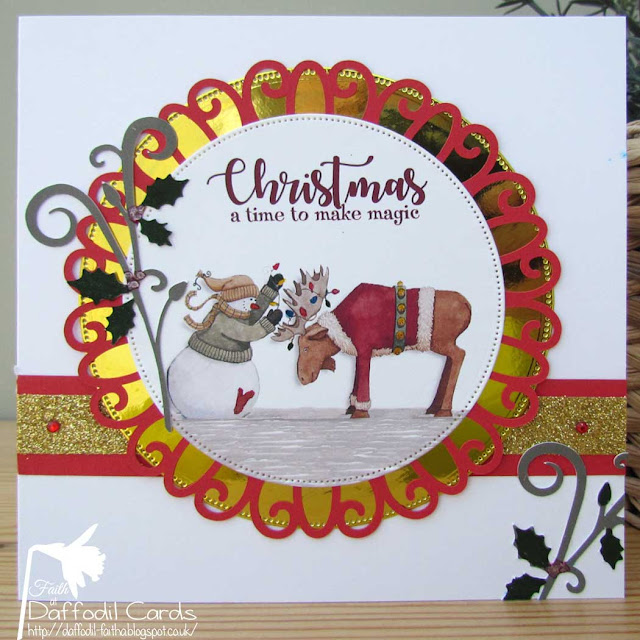 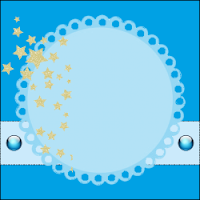 Hi Everyone, my card today is for 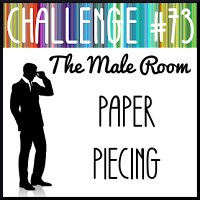 something I always do digitally, but as DT we had a discussion about piecing and for me an idea was born, that wasn't the slightest bit digital, can you believe it?

Anyhow, I die cut the shape and basically filled in the shapes with 3 different double sided papers from the same pad, yep! "proper" paper from a pad!

I cut the "pants" on the Cameo from an image I found on the web. I cut the diagonal die out twice, from different paper and joined them, then added the other side of the double sided paper to the shapes, one half all the same paper and the other half mixed paper. I rounded the corner with a punch. 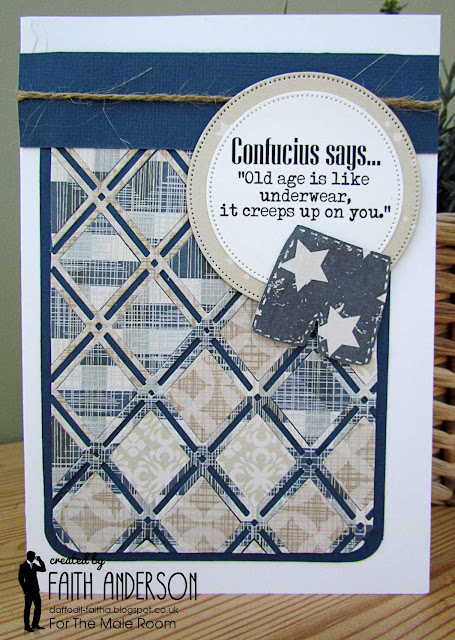 Hi Everyone, after a few days of absolutely no action by me, I have a card. It's for the Outlawz Wednesday sketch challenge, and I only just made it! It's a digi kit by SnickerDoodles from a blog hop in 2015, I had it as a freebie and only came across it by accident, looking for something else and it spurred me on to make it. A very unusual colour combo, but I really like it and surprisingly so did hubby. With gold Nuvo Glitter Sheen, it has lots of sparkle. The star has Uniball silver glitter pen added. All layered and fussy cut. 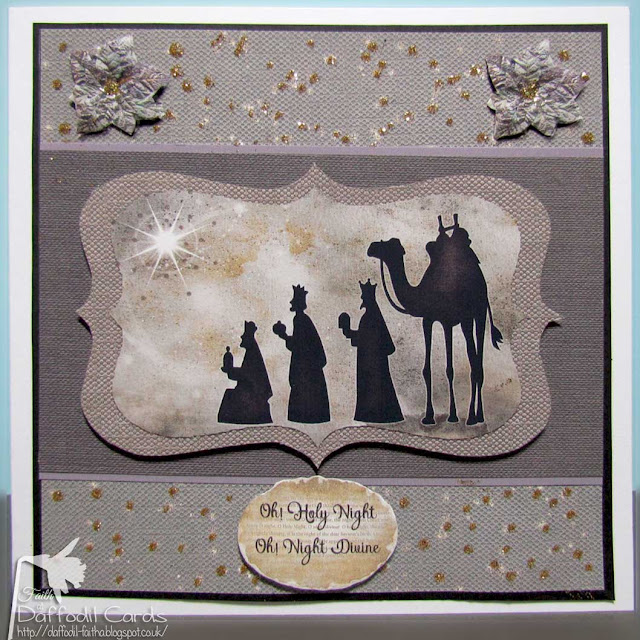 Hi Everyone my card today is for the challenge at

my Team mates have wonderful work and the challenge is always
Anything Goes, why not pop over and enter.

My card is of the Panda image, isn't it lovely, coloured in Photoshop. I decided to make it quite monochrome and I hope you like it. Although in the photo of the card. you may not be able to see it, I mounted the bamboo paper, cut into 3, onto textured cardstock. I added it to the Silhouette Cameo cut, round circle, I shaped the text layer and added it to black rectangle I added a bow, which I thought matched the bamboo. 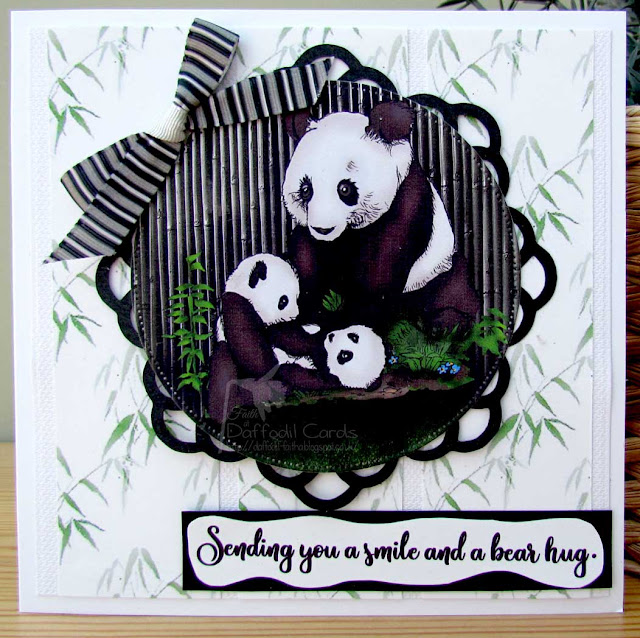 http://outlawzchallenges.ning.com/group/prismaandothermediums/forum/topics/twisted-thursday-challenge-nov-2-9-optional-twist-hope-love
Posted by Faith A at Daffodil Cards at 08:00 24 comments: