Hi Everyone, another Christmas card, I did most on my Silhouette this year and this is one of them. It's by Nic Squirrell at the Silhouette store. Greetings printed onto vellum. 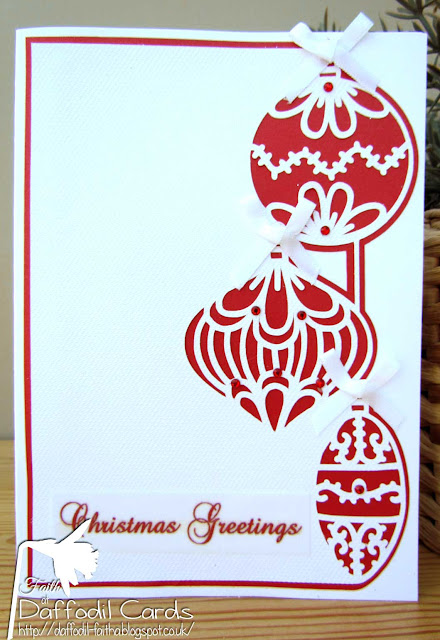 Here's one I did for my GNephew living in Sydney, Australia. Not a good photo as it was raining and very dark when I took it, it had a lovely sparkle about it though. 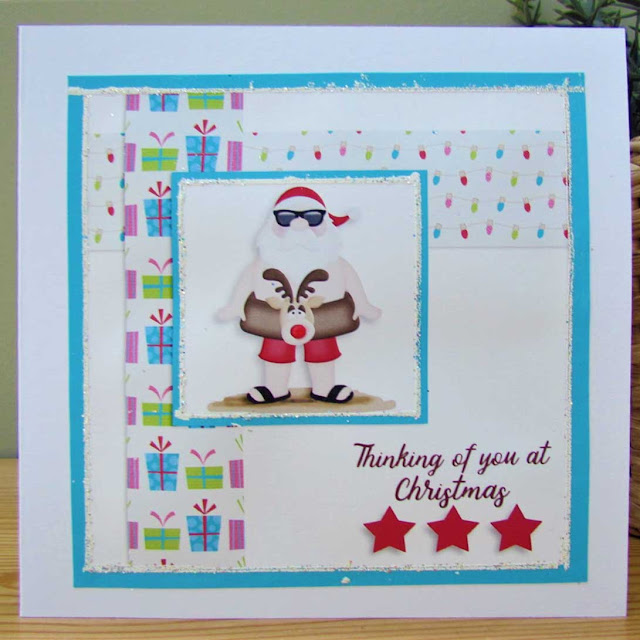 I still have another one later in the week. Then will leave them, before you get too bored LOL
Posted by Daffodil Cards at 08:00 18 comments:

Hi Everyone, here is another of the many Christmas cards I did for family and friends. Cas style seems so good when replicating.

I don't know where the snowflake is from, I didn't save the details, now I have Silhouette version 4 with a notepad I can bring up, I'll save them from now on - if I remember LOL. so easy to cut a few together. The centre is removable, some were removed and kept a few complete as this one is. I love the stars on the it. The greeting is printed onto vellum. The background is a Crafters Companion snowflake embossing folder. 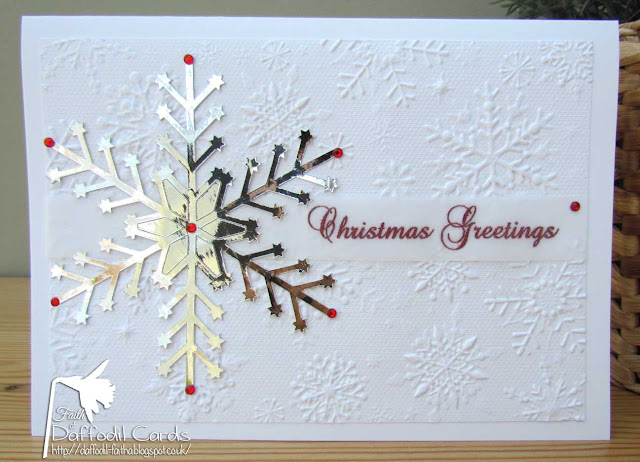 Hi Everyone, I hope you've had a Great Christmas. I have 2 boxes today, I made them for specialist bottles of beer, for my brother and BiL, I thought the "snowballs" were a fun addition.

I started with the cracker template by Birds Cards, which I played with in Silhouette, to make a bottom for the shape and adjust the size to fit the bottle, I am so thrilled with them, I felt they look much better than wrapping them in paper? Hope you think so too. 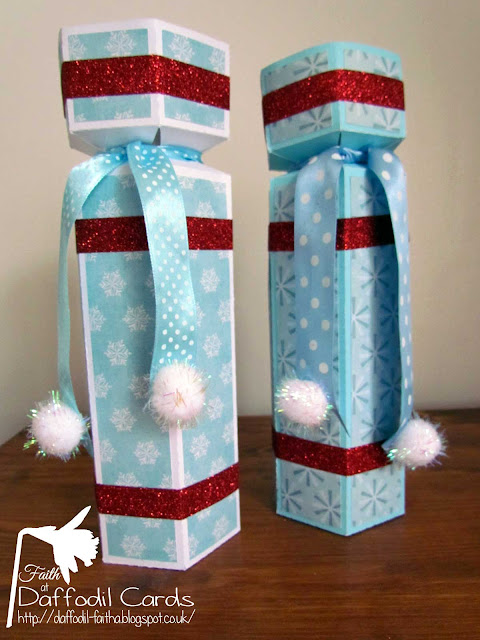 card from stash
paper is from a pad I bought a few years ago, the ribbon is from stash.
glitter tape is from Morrisons Supermarket.
"snowballs" are from The Range.

Believe in the Magic of Christmas

Hi Everyone, I saw this image with Create with TLC and had to use it, I love the pink in it. Hence a quick print and clear embossing powder, then heat emboss on vellum, a little dry embossing on the Santa, although it doesn't show up much on the photo, it does have depth on the card. A quick fold and add to the card and this was done - MAGIC! 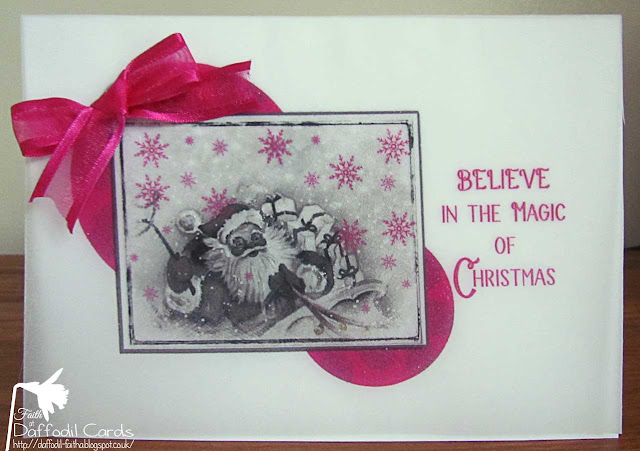 you can see the effect on the closeup, this works with any image,
it's how I did this card. 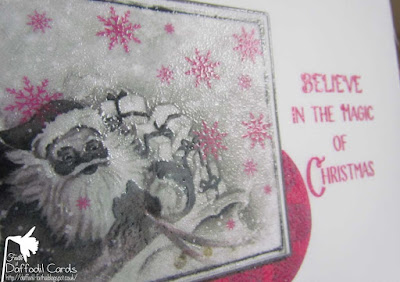 Hello Everyone, after a brief? spell of inaction on my blog, I felt it time to send you all a message. I hope to see you on your blogs soon. -
Look out for the snowball! 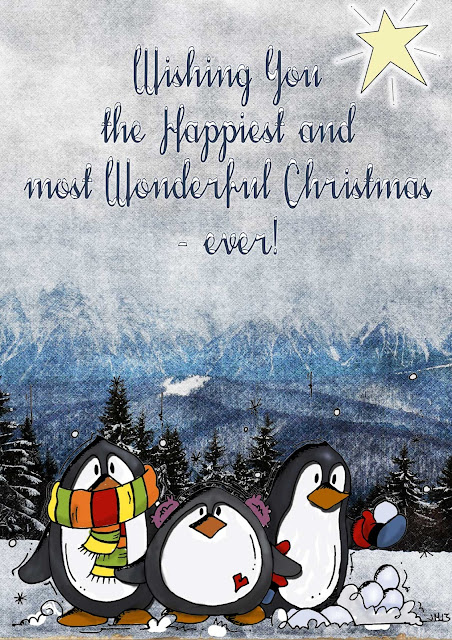 Thank you to Bugaboo and The Urban Fairy for their images
to help me make this for you.

Hi Everyone, a post from me at last and would you guess a Christmas card. LOL

This is one of the 75 cards I made, for family and friends, I also made boxes etc. for small Christmas gifts. I'll add them in the next few weeks - even though Christmas will be over!

I cut the "merry" out of gold mirror card with my Silhouette Cameo and printed the border, with the added Christmas, onto thick vellum, As it came out of the printer, still wet with ink, I added clear embossing powder, then heated as normal, it produced a lovely effect, which felt like it was a sticker. It's something I haven't done for years, but will be doing it more, I think.
Edited - replaced photo as this shows the embossing better. 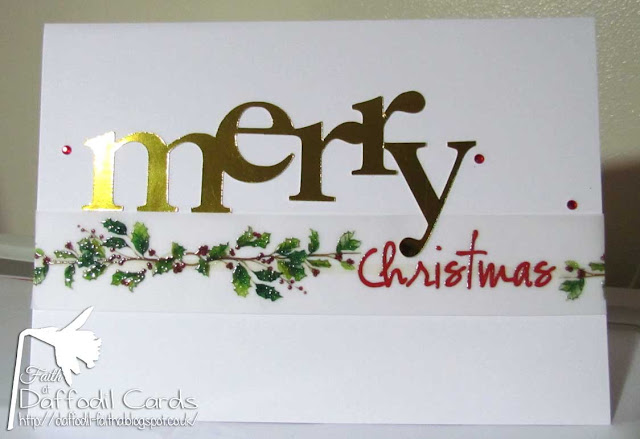 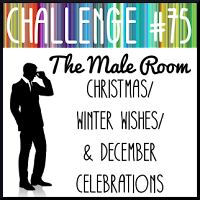 Hi Everyone, my card today is for 2 of my Great Nephews who are 18, in fact the story about this card is one I really have to tell. Skip the next couple of paragraphs if you don't want to know :)

I hadn't been on the computer for a few days and this is where my calendar for birthdays is, so I don't forget! I had been struggling for a couple of weeks, with an 18 year old card for the 2 boys, both named Cameron and born within 3 weeks of  each other.

I switched on my 'puter, to find I had 2 days for his birthday, and it was Friday aaarrrgh! to make and post a card for one of them, AND, I was expecting visitors later in the day. I had to find a quick card, so jumped to my Silhouette files and found a file, which was made up pretty quickly, I added glitter self sticky paper to add a bit of bling, also cut on the Silhouette.

Card done and in the post just before Brother and SiL arrived, I was pretty pleased with myself. I told them the story of their Grandsons card and SiL said, but his birthday is in December Argh! Hence me showing this card today for the challenge.

I had to do another one which took less than half and hour, and just in time to get the card I should have done into the post. So one is VERY early which he opened thinking it could be well done on getting an apprenticeship card, which I also forgot!!!!! At least he was thrilled with it LOL.

I don't know what is happening to me, 3 birthdays, a Congratulations and a retirement card, all just remembered, made and delivered, well, apart from the Congratulations which still has to be made!

Anyhow after all that or not as the case may be, here is the card that got me out of trouble. 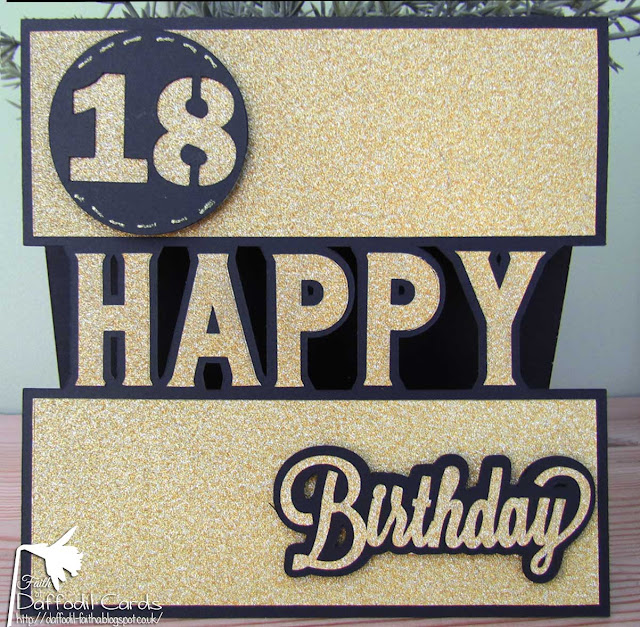 
Anything Goes Challenge
at

I am busy with "life", but I want to fulfill my role with my DT duties, therefore my card today is one I coloured in, with what was to be Winter colours, but in the end I think it's a little "ethereal" and I like it. I hope you will too. I loved the quote. 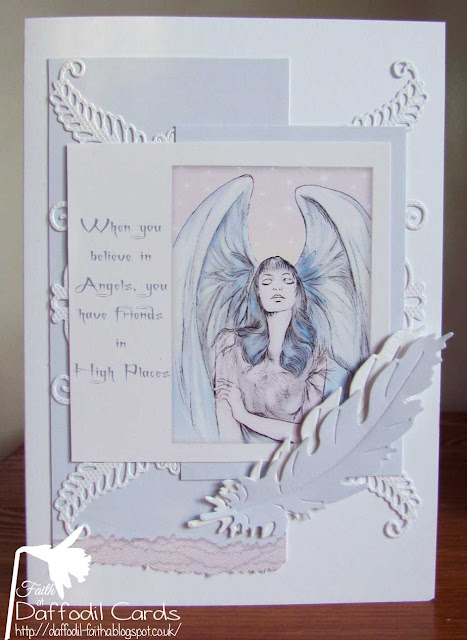 Here is a photo of the most beautiful rainbow that appeared this week. It was actually a double rainbow, but I didn't have the second one in the photo! 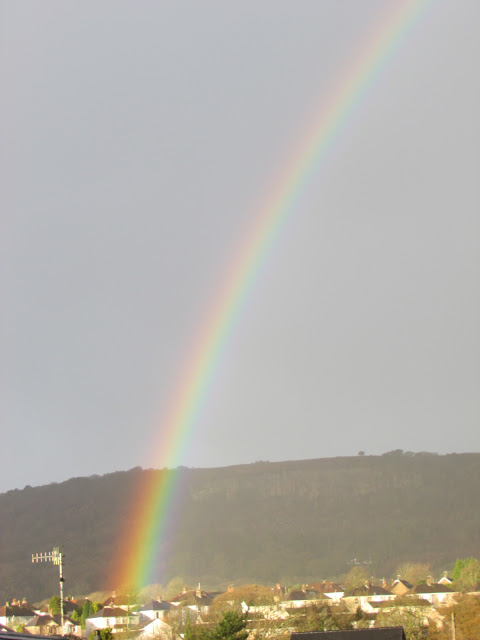 I also have a photo of the first frost on the lawn and the reflection on the lawn from glass, just wonderful shapes. 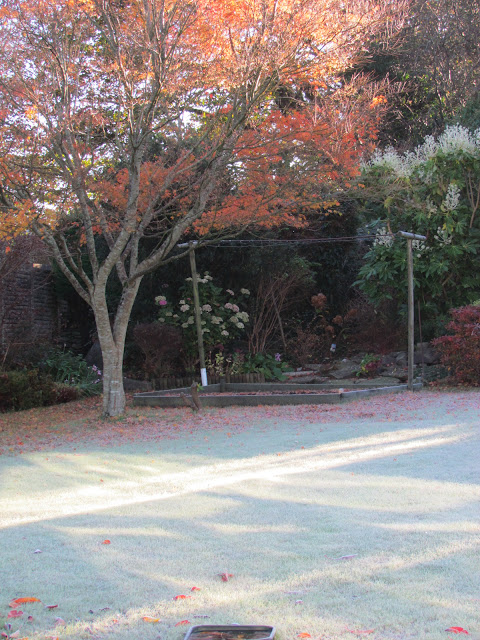