Hello from snowy Wales and in fact the UK.  We were just outside the red warning area, which was just as well, we had 4 inches of snow, but by this afternoon we were able to drive out of our estate down 2 very steep hills onto the main road, which was clear, we were luckier than a lot of people, it did look beautiful though.  Here's some photos of it, not as deep as 2010.

The first one is a daffodil nearly through, hopefully the snow will slow it's growth for it to come out for St David's day on March 1st. However if we continue to be mild and wet after the snow, I expect it will be open for February.  The other is looking up at the garden. 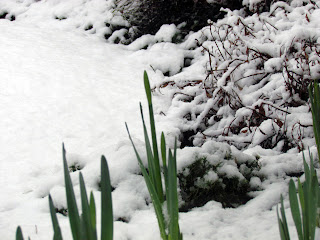 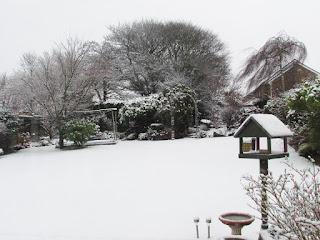 Anyhow here is my card for today, a birthday card for my niece, it doesn't seem possible 3 of them of them will be over 50 this year, and me a mere fledgling, ahem!  I used a scrapbook kit Summers in Sconsett  by Aimee Harrison, as I was last minute doing it.  I love the trellis and flowers, made the cluster from the elements for either side of the frame, glittered it and it was done, (as if), it took more time than I thought it would, probably because of the clusters I did. I'm thrilled I have at least learned to do shadows making them look 3D.  (this is a flat card) 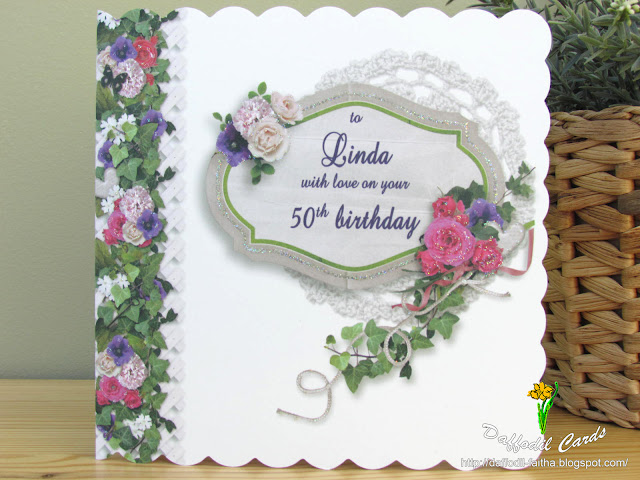 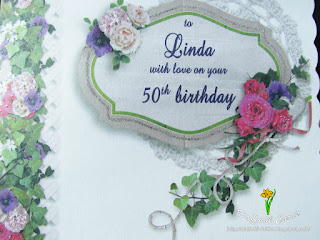 No challenges today, not enough time to see what's out there!

This is absolutely stunning Faith. Did you use the scrapbook kit with Photoshop ? I really must try and learn how to use it.
Re the snow, our garden looks much like yours. Hoping to venture out today providing we can get out on to the main road. Stay warm.

Hi Shirley, yes I do all my cards in PS and there are loads of free scrapbook kits out there, must admit to buying a few too LOL.

Faith it is lovely and really thought it was one of your 3D cards until I read. I am in aww that you can use photoshop so well..I tried for ages to get the hang of it and gave up as too hard. X

Incredible dimension on this card Faith! We're looking quite similar on the snow front here inBuckingham and there's more falling as I'm typing this! Vicky x

Such a beautiful card Faith!! Love those flowers and the personalised greeting makes it so special. Similar scene here and it's snowing again now!
xx

Very pretty Faith. I love the shaped frame for your personalised message. Your snowy scenes look lovely. We are the same with more snow forecast. x

I love your Birthday Card1 I'm sorry I thought it was the Mother card you made so LEFT THE APPROPRIATE SAYING BUT IT WASN'T SO DELETED IT!
You make beautiful items.Well done.

I love that trellis loaded with flowers! It does look 3D. It's Not? You are amazing with the computer! Love the snowy scenes!

Goodness me Faith I cant believe the card is flat its simply amazing, how do you do it !!! I wish I had your talent this is so pretty.