I won't bore you with such a long post today, but I will post a short poem written by my Grandfather, which I have given a bit of age to (hopefully) 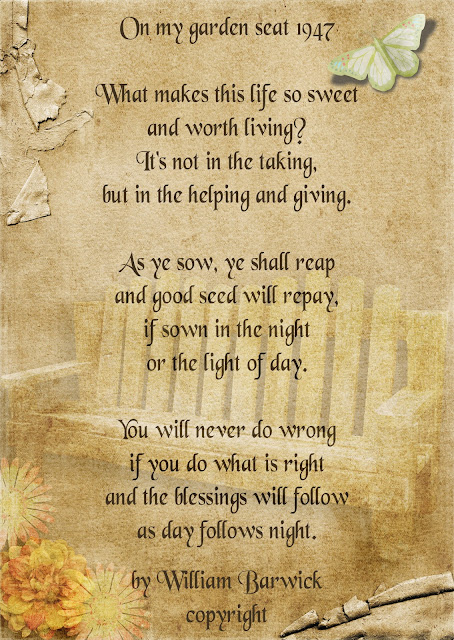 Now on to my card, a friend of mine wanted a card for her mother's birthday, pretty and pink! I have an SVG file from Shirley's Cards  Here that I have wanted to use for ages, this being my first opportunity to use it.  I made the cutting file slightly larger so I had a 6 x 6 card. and adjusted the other parts as well.

I used a white card for the aperture part and pink for the rest, I also added another cut butterfly to place over the white part, then used the other cut one to 3D over that. I hope this is making sense?

I then printed out, after resizing in PS, a floral circle element from the Urban Garden kit by, ETC by Danyale at Digichick, as a backing for the butterfly.  Sparkled it up with Glamour dust and added bling from Papermania at The Range. Oh! yes and I did notice the bling wasn't straight after taking the photo and straightened it.  This is also the first time I have used so many different cut out elements, but I like it, hope you do. 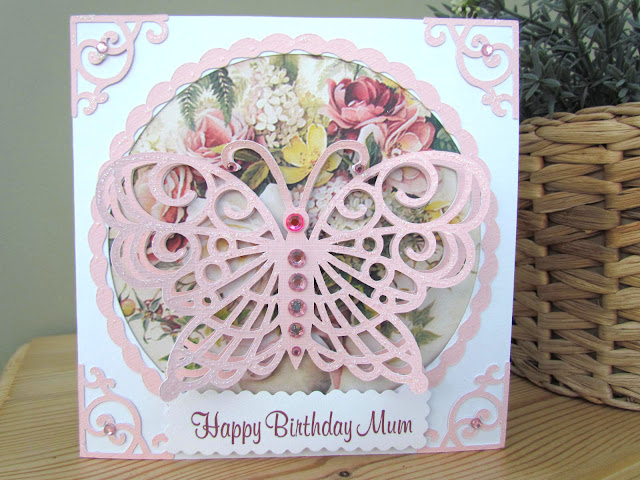 This is entering the following challenges

http://redcarpetstudiochallenge.blogspot.co.uk/2013/01/rcs-19-butterfly-effect.html  The Butterfly Effect - Include a butterfly, (Yep! I have)

http://quirkycrafts.blogspot.co.uk/2013/01/some-thing-newwith-pink-1st-quirky.html  Something New with Pink.  (The cut file is first time using and I have lots of pink!)

Posted by Faith A at Daffodil Cards at 21:08

Your card is beautiful! So delicate and pretty. Your grandfather's poem shows what a wise man he was. It is a beautiful verse. After MIL passed away last year my sister in law published her poems as an anthology and sold them in aid of the Alzeimer society

What a fabulous Butterfly, I want one! Beautiful card I'm sure your friend's mum will love it! Thank you for joining Quirky Crafts this challenge!!

Lovely card! That butterfly die cut is so pretty. Thanks for joining us at Red Carpet Studio.

The poem is lovely Faith, such wise words. Love how you've used my template, you've made it look really beautiful.

I love your grandfather's poem Faith and he speaks the truth.
What a gorgeous card you've made too (and yes it all makes perfect sense!) I especially like the way you've placed your intricate butterfly over such a bold paper in the aperture. Vicky x

Loved it Faith, Yes, Grampa, would write on any scrap of paper available, as just after the war paper as we know it today was impossible to obtain, Brian

Your girlfriend is going to love this card for her Mum! And your grandfather's poem is wonderful and so pretty the way you have printed it!