Well the snow has gone around these parts, but rain is "persistent" washed all the snow and dirt away.  We had a few hours of blessed sunshine which we have been told will be our last for another few days, It's hammering down at the moment, at least it's dark and I can't see it.

Now enough of my "SAD" (seasonal defective disorder) offerings, didn't think I suffered from it, but I could be at the moment.  I just want some SUN.

Anyhow enough of the doldrums, on to my cards. I think I may have found a junior mojo, I did 3 cards yesterday and another one today, not as good as I hoped, but on the mend so to speak. I shall post them separately in case I lose junior mojo again LOL.  I have had this order for at least 3 weeks and couldn't get anything together, the remit was Rugby League, Golf, Miner, Fishmonger, Furniture Shop, Launderette and the RAF.  I tried and tried different things, maybe that's what made everything go to pot.  In the end I thought I would do a "Wordle" HERE  I put all the relevant words in with DAD and 75th birthday and it came out with the closeup here, after I had repeated the words a lot of times!  It didn't seem to be enough to put on the front of the card, so I added relevant pictures by the main words, then cut around it.  I cut the 75 and DAD on my Cricut with different paper from Papermania, which is embossed.  The main background is Stripes by Marisa Lerin at Pixel Scrapper and the ribbon is an overlay which you can colour yourself from Christine Smith.  I just hope it will be suitable. 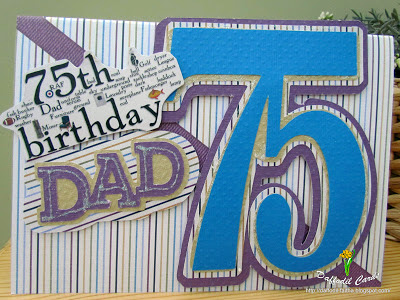 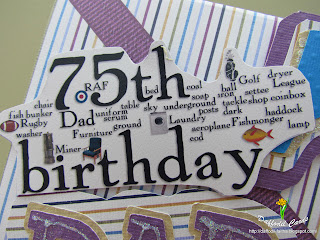 Those sorts of cards are always hard, aren't they? I think you have done a brilliant job. Bucketing it down here and the snow is now looking very patchy now. I expect it will be gone by morning.

Well I think your mojo is back Faith. The words with the little pictures is a great idea. The card looks brilliant.
The rain hasn't washed all our snow away yet but hopefully it will soon as everywhere looks so grimy.

Absolute genius!! Love it! Thanks for showing me Wordle too!
xx

That was quite a lightbulb moment Faith - your word cloud is genius! I feel the same about the weather and am yearning for a bit of warmth and sunshine. Perhaps we should send begging letters to all the airlines! Vicky x

How fun, Faith! I predict that he will love it! No sun here either. I need to get out some yellow card stock to brighten things up!

That was a difficult remit but you've come up trumps. I'm sure it will be loved. x

Hoping you've had some cheeful sun by now and are feeling better Faith.