Hi everyone, my working day on Tuesday was longer than normal, as I had  taken a phone call in the office while I was finishing off my work to let my manager know that we had a potential major incident. Which was interesting, as I hadn't been in the hospital when it had happened before.

We (including admin - me!) were put on high alert for an incoming large accident, we were told someone had been killed and to expect large numbers of major injuries.  It was fascinating to see everyone get into emergency mode with everyone having an empty Theatre allocated for the incoming injured expected, plans drawn on a white board so everyone knew when and where they should be when receiving patients to Theatre, everyone having a role with telephone numbers ready to call in extra staff if needed.

We were on high alert for about half an hour, when we were told that there were 10 minor injuries coming in and to stand down. The people who were due to have gone off earlier could now make their way home, including me.  It was such a relief to hear that there were only minor injuries for the sake of the patients,.

For me to see my colleagues in a major incident situation, made me realise that these ordinary, fun loving great men and women, I work with, are heroes and were doing their work as they normally do every day, but not as I have seen it before.  I am so fortunate to have been included.

After all that to boring - my card LOL.

It's a card I did after trying to get my mojo going, still in trouble with mojo though.

I had a look through my sketches to see if one would pop out and let my imagination go and thankfully one did from Splitcoasters. 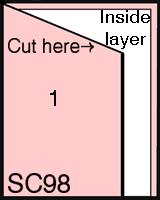 My card is made with papers and elements from a scrapbook kit A Dogs Life by Gina Cabrera, I 3D'd the dog and ball and cut some grass out on my Cricut from a file by Cards by Bird, I then placed the sentiment on the top also from the same kit.  The inside is all digi and done in PS. 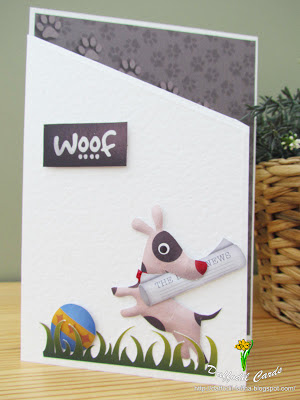 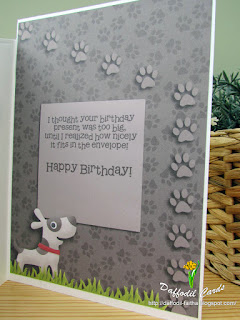 I shall enter the following challenges with this card

http://melonheadzfriends.blogspot.co.uk/2013/01/our-first-challenge-use-digi.html   Use a Digi (Yep!)

Love the little dog Faith, it's made a great card.

There's NOTHING wrong with your mojo Faith - this is just brilliant! Interesting to hear about the high alert at work too. Vicky x

oh how cute is this .. love that little doggy
Lisa x

Love your story about work Faith. What would we do without our hospital staff! Thankfully, most of us will never need to be admitted under such circumstances.

Your mojo is working fine - this card is BRILLIANT!!
xx

Wonderful story and that all worked out in the end. Your card is stunning! I love the inside. Thanks for joining us at Melonheadz challenge.

This is such a fun card! Adorable!!!

Thank you for participating in the first challenge at Melonheadz Friends!

Glad everything worked out well in the end and that the injuries where not too serious ! fantastic card and love how you do the 3D just amazing it looks so real. Your mojo looks fine to me my friend but I no what you mean.

This is the cutest little puppy! Love the paw prints and the fantastic sketch!