Did you miss me?

Hi Everyone, I have had my computer die on me, it was 9 years old and it has been faithful friend. I ordered it and after waiting a week for a new one with all bells and whistles and Windows 11! I am back on line, however I have quite a bit still to do to make it feel like mine, so won't be around until next week, hopefully earlier? There is a difference to seeing files etc to get used to and I did have a program? or a fix? for me to see my Photoshop files as thumbnails, but now I only see the logo and name of my files grrrr. There are a few things like this to tackle, so I hope you will understand my lack of visits.

A new printer and computer in a couple of months? Thankfully I had had another new thing needed!!! within the same time frame, a drive for my old computer, which thankfully is able to be used in the new 'puter and because of this I have all my files. I think my Guardian Angel thinks I'm made of money? but did save me stress with not losing my files. My son has spent a few hours or more on getting it all up and running for me, now all I have to do is tweek things a little to suit me. At least that's the 3 things they say will go wrong if one goes?

Thank you all for your continuing comments. I really appreciate them all.

This lack of computer did in fact do me a favour, as I did a few stamped cards that made me think differently. I also did a clean up in my craft room, still a little way to go, but the worst is done - except for my ribbon drawers, ugh!

This is one of the cards, done in a rush and delivered before I realised I had forgotten to take the upright of the card duh! I was trying to show you the shine I had. I mixed gold watercolour paint with the watercolour ink to get a shine and then added little dashes of the gold paint on it's own on the background. I diecut the image and added it to some blue card I found during my sorting. that was just the right size with a bit of straight cutting,  The cross and sentiment were cut from the offcut of the main image.
stamp - Mosaic Flower Chocolate Baroque
ink - Distress ink
gold ink - Kuretake Starry Colours (bought after I saw what Greta did on her cards)
pin dies - Card Making Magic
cross die - Cut it and Make
insert sentiment - Magazine freebie 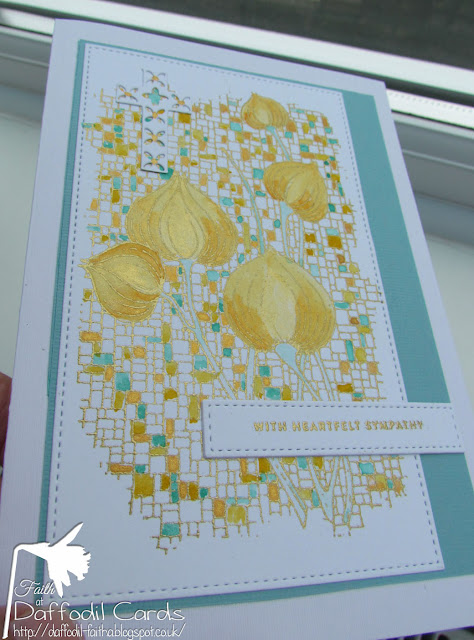 this shows how shiny it was 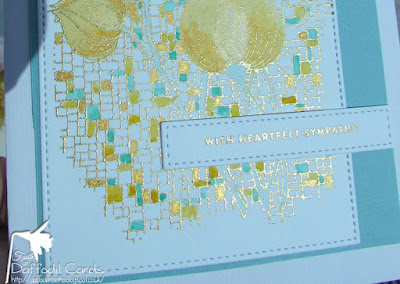 this is the insert, a piece of the blue card with the gold paint used as edging. 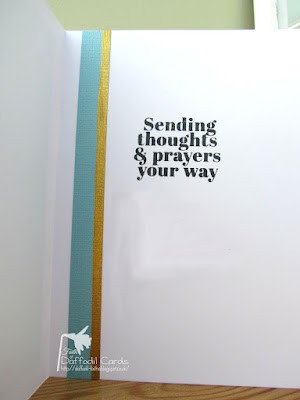 It's also our 56th Anniversary today and hubby has surprised me with a meal out tonight, he said after all the stress this week with the 'puter and a couple of other things, he and I need to relax and concentrate on us for a change. Isn't he a darling? We don't usually celebrate "ordinary" Anniversaries, so this makes a nice change. I also had the most beauitful card with a beautiful verse, something else we don't do. I felt awful as I didn't do one for him! I'll have to make it up somehow?

Anyhow, apologies for a long post enjoy your weekend. I hope to visit asap

Posted by Faith A at Daffodil Cards at 17:30

First of all Happy Anniversary to you both and hope you enjoyed your meal.WOW hard drive,printer and computer not little things but as you say three so fingers crossed thats the end!Beautiful card love the beautiful gold embossed stamp and love the colour combination
Carol x

OMGoodness, Happy Anniversary to you and hubby! You definitely deserve a nice meal out! ;) And I'm so happy you got your new computer, and yes I've missed you but totally understand the time it'll take to get everything back to just the way you want it! No rush... just do things as you can!

P.S. Your card is gorgeous with all that gold! Love it!

Happy Anniversary to you both, you'll have to tell us about your night out next time. I do hope the tweaking goes smoothly, will be glad when you are back to normal. Til then, so happy I found you on FB! xoxo P.S. - that's one beautiful card and very comforting too!

Happy anniversary! 56 years is quite a mileatone and not ordinary in my book! The card is just lovely with all the added shine!

Happy anniversary to you both.
Beautiful card, love the gold its so lush.xx

Of course you are missed!!!! First off Faith, Happy Anniversary to you and hubby!!!! Secondly, I am glad you are getting your computer issues all settled. It's always hard starting over with a new computer...we get so used to our old ones and how things worked, then we have to get used to a new one, new programs, etc...I guess it is good for the brain, maybe just not the blood pressure! lol And thirdly, your card is gorgeous! The gold and shine from it is stunning. I love the touch of green throughout the card, just that little pop of color is stunning with the gold. Love the inside of the card too, a great color combo for sure and you executed it beautifully! Hugs, Brenda

Hello Faith, happy anniversary and so nice that your husband surprised and spoilt you. You deserve it!
Glad your computer is up and running and of course you have to get used to it. Every new toy has its own instructions and usages.
Take your time!
The card is beautiful!

Yes, computer and printer problems are a problem! Thankfully, your son helped you and you have just a few things to tweek. We are experiencing printer problems, which my son has been trying to fix. Also, we have spectrum coming this afternoon due to things running very slow. I hope it all gets worked out soon for I do need my printer to print out some letters for church. Anyways, your card is so pretty with all the bright yellow and gold! Lovely flowers and love the cross die! I'm sure your thoughtful beautiful card will be appreciated!

Well of course you were missed Faith, but pleased to hear you've got your puter now and that you are able to tweak it to suit you.
Happy Anniversary to you both, and enjoy your meal out, Kate x

Belated Happy Anniversary Faith and I hope you manage to get your new PC running how you like it - I dread the thought of having to change mine. Your card looks really beautiful xx

Happy Anniversary to you both. I did miss you friend.
www.rsrue.blogspot.com

Happy, happy anniversary! What a sweet hubby--keeper, for sure! Love the gorgeous sympathy card!

oh gees, I'm so sorry I'm late in visiting and wishing you a most special anniversary! 56 years is just amazing and I'm so glad you got to go enjoy a nice dinner out - just what the doctor ordered for all your computer woes! I just love this gorgeous card with all the shiny gold mosaic details! It's beautiful! Here's hoping your computer issues soon resolve themselves for you! I will need a night school course to learn Win11 when I'm forced to upgrade LOL

This is so gorgeous. 56 years married? We’re you married at age 5?I think you should count again. You don’t look like you could be old enough to be married that long.
Congrats

Belated anniversary wishes.
This is so beautiful - just love how you did this. Maybe you should leave the PC more often!

Stunning card Faith .. that’s a wonderful image and I love the shimmery look to it. Belated happy anniversary .. hope you enjoyed your meal out ❤️
Pauline xx