Hi Everyone, It's my Son's birthday today and he hates being reminded he is getting older. However I have to keep reminding him and will, as long as he objects.

I confess I am a Bad Mother.

I usually like to use a lion on his birthday card, as he is a true Leo of his star sign, he loves "Space", so an addition of the Leo star sign was added with gems. For my badness, I added his age, as I do most years! However this year I also added the time to the second! I had seen it on the web and who couldn't use it? Not me.

I added a great paper which I felt was artistic and represented the heat of Africa. I had this majestic lion in my files, I think he has a kind and intelligent face, so I added it to my Cameo and cut it out in vinyl, I've added how tiny some of the pieces were, I had to remove to make the shape of the head, I even used a magnifying glass. I hope he won't be too angry with me (of course not LOL) He will raise his eyes up and say "Muuuum". I used a glitter pen to accentuate the age and the Leo. Quite a simple card, because he doesn't keep them around long, except one I framed HERE which he still has in his room here at home.

I don't know why these items are so far apart, I can't get them closer no matter what I do - strange! 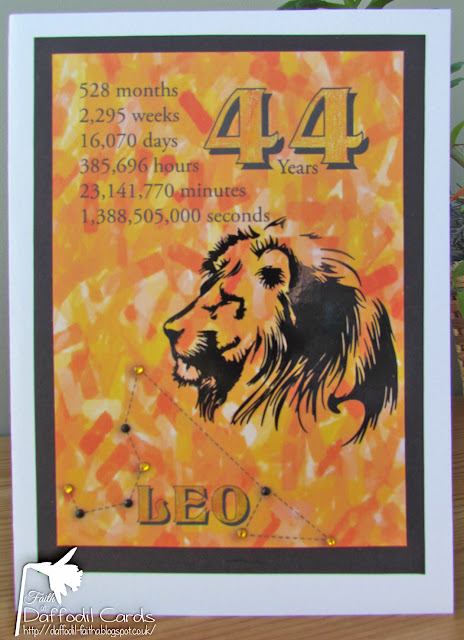 this shows the shine of the vinyl and the glitter pen 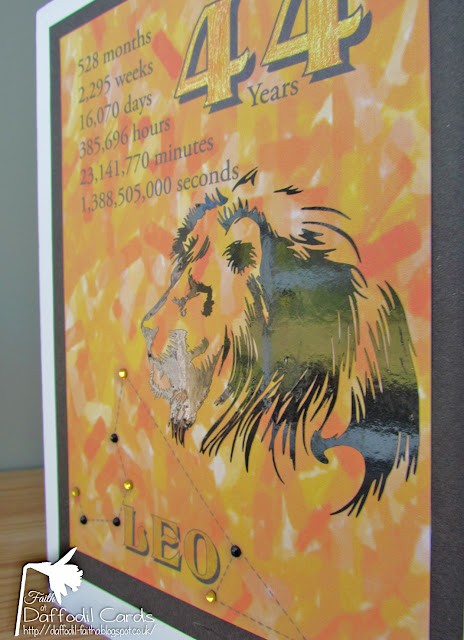 here are some of the pieces I needed a magnifying glass for,
it's incredible how small the pieces are that the Cameo cuts.
Don't look at the wrinkly thumb, LOL 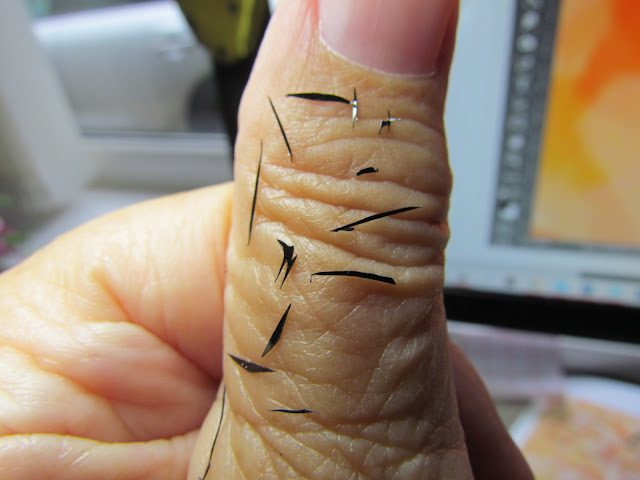 WOW Faith this is one fabulous keepsake for your son, love the colours and the magnificent lion

A super card Faith, I love the age broken down to the second - a great idea.
Pauline - Crafting with Cotnob
x

Very nice masculine card - love the lion thanks for sharing!!!

WOW absolutely brilliant card love all time countdown on the side lol and he should keep this on display just for the your patience of using those tiny pieces!
Carol x

Absolutely fabulous card. Everything is so well thought out with wonderful background and detail. I think this is a keeper. xx

Wow what a fabulous and thoughtful card for your son. I had a little chuckle about him not liking to be reminded of his age and then you did remind him and then hi-lighted it in glitter....genius Faith....LOL x.
The lion looks fabulous in the vinyl and well done you with all those tiny pieces x.
I clicked on the link for his 40th card Faith and laughed out loud.....x.
I tried out the new blogger today for the first time and there is sure lots of 'issues'....

Fabulous card! I am sure your son is going to love it!
Hugz,
Chana Malkah

It's a stunning card Faith, and I'm sure your son will love it. Fabulous lion image and I love all the stats, great colours too, Kate x

I think you're a fabulous mother, Faith! My eldest turned 50 (!) and I sent him a similar card rubbing it in that he was now beginning the second half of his century and that I wasn't quite 70. The more he ages, the closer we get in our relative years. lol

Happy Birthday to your son, Faith. You are a great mother!!!

That's brilliant! I am sure he will love it very much!

Wow! What a fantastic card, Faith! You're a wonderful Mother too! You actually make cards for your son on his birthday! It's great that it bugs him...and that you continue to do it! lol Incredible how tiny those pieces are! :o)

Another of your brilliant ideas Faith, you have great imagination and Happy Birthday to your son too, I’m sure he will love the card despite rubbing in his age !! The Cameo is awesome in how it can cut such small detail isn’t it - one of my best ever craft investments xx

Such dedication, those pieces are so tiny! Love the sentiment and handsome image, Faith. Happy birthday to your son~

You have the patience of a saint to work with those itty bitty pieces of vinyl and add them to your son's card! You're not a bad mother, but one who has obviously enjoyed every moment of your son's life with such intricate details on his card! He's lucky to have a mom who cares so much about him in this lifetime! Love that awesome card!!

I was wondering how old your son was Faith, I love that you remind him every year of his age on his card. So funny! This card is amazing!!! I love that paper and think the same way you do, it represents the heat of Africa. The lion head, amazing and love it so much! Cutting machines are awesome for sure, doesn't matter what kind one has, they are all basically the same and amazing. Your Cameo cut those delicate cuts perfectly. I know you had to have patients with those tiny cuts too! I love that you counted down the years from months to seconds, so cool! How did you find where to do that??? Love his celestial constellation too. I'm the bull and yes, I live up to the bull very well! lol Great job and Happy Birthday to your son!!!! Hugs, Brenda

Ha ha, your post made me laugh, I think I am kind of the same mom. I even scrapbooked my daughters first pimple!!
I love your card and a lion is my grandsons favorite animal, so I always pay extra attention when I see one.
The hard is great and I am sure your son can see the love you put into this card.

Wow! The card is fabulous, Faith! I hope your son loved it (even with his age on it!)

No matter what he says, bet he loves this fabulous card, Faith!

What a terrific card. I'm sure you're a fantastic mother really!

Aw, your son will have loved your naughtiness I'm sure Faith! What a fantastic card with perfect colours. I love the addition of the Leo constellation done in gems. Happy (belated) birthday to your son :) Vicky x

Faith, I love this beautiful card. The background is wonderful.

Such a wonderful card so well thought out - it looks great. I hope he liked it despite having his age on it!