Hi Everyone, I have just realised I haven't blogged for nearly a week, I have been around blogland and have been making cards, just not getting them on here. I've also added inserts to masses of cards I have made in the last couple of months, also making a batch make, that I will show another day.
Anyhow, my card today came about in a matter of seconds, OK maybe a minute or two. We are carers for our son and we had a phone call the other day from the local Carers Association. One of their "days" was card making, well! I couldn't say no to that could I? it was a Zoom call due to Covid etc. They delivered a few things to everyone before hand and we were supposed to use them to make a card.
During the call however everyone else was making what they wanted, only one was a cardmaker and not that often. I was a bit disappointed and tried to make things with what I had from them, it was a complete disaster, (all the others produced great cards) and when we were told we had 2 minutes to go, I threw placed it into the bin. I got the kraft card and washi tape that also came from them and got some stamps out and just went for it, this is the result. The blue circle I admit was done later to "finish" the card off.
I wouldn't say it's one of my best card by any stretch of the imagination, but for being done so quickly I was pleased so was the host. (He was probably pleased I had produced something LOL). The next one is in October, we'll see what happens then. They also rang last week, saying the next "day" was cooking? Whaaaaat? No thanks, Hubby is the main cook here LOL
washi tape - unknown
stamps - Simply cards and Paper craft # 207 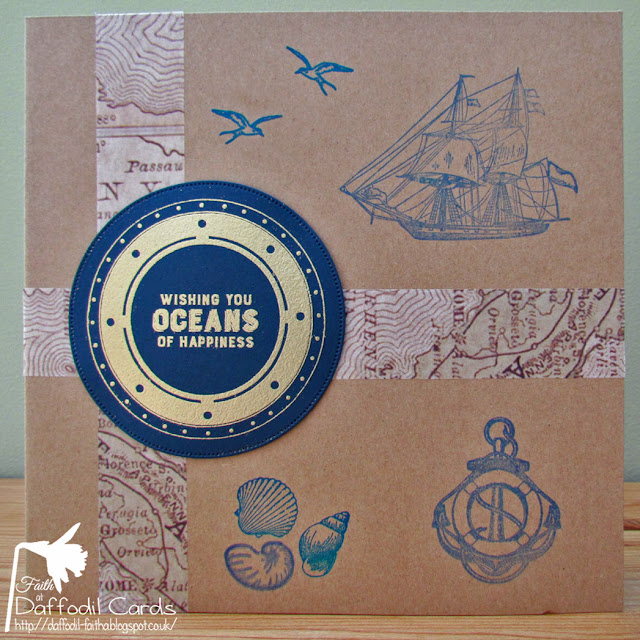 Posted by Faith A at Daffodil Cards at 19:38

I think it’s a lovely card Faith, I like the look of the stamping on the Kraft card. As for cooking, like you my hubby is the main cook in our house !! Today though we are being brave and venturing out for a meal, something we used to do every Tuesday pre COVID xx

A super card Faith, great stamps and fabulous washi tape, you could use it with lots of different themes.
Pauline - Crafting with Cotnob
x

This came out great Faith! I too do not do well under pressure! Kraft and blue is always a solid choice.

Hi Faith I do love kraft card and don't use it all that often, your card is lovely, great nautical theme, Kate x

Perfect sentiment for a lovely card.
Thanks for sharing

Very nice card as always thanks for sharing!

Lovely embossing and yay you to do that under pressure! Such a handsome card~

Kraft card is one of my favorites! You did a great job!

Do you know Faith, I have also struggled to make things in group situations. I tend to just talk to people - crafting tends to be a more solitary activity for me. But that's fine. I think it takes lots of different people to make a world and no one type is better than another!!
Anyway, you ended up with a lovely card! I love the blue and craft and I can almost smell the salt air! Hugs, Vicky x

A beautiful card with a nautical theme, Faith! I love the sentiment in the circle--so fitting! Thanks for sharing your card at the Outlawz Paper A La Mode Challenge!!

I think it is a great card Faith, especially since you only had a little bit of time after trashing the other one. Love the washi and the stamps you used. A kraft base is always a good choice too, who doesn't love kraft cardstock?! Your embossed circle finishes it off perfectly. What? No cooking?! lol Hugs, Brenda

Love it so much. Your cards are always impeccable

Wonderful masculine card Faith and well done you on persevering x. Had a little chuckle that the next Zoom 'meeting' will be cooking!....x

This is fab, love a nautical cards

I'm generally a very slow cardmaker, but some of my best have been done for 90 min challenges. Looks like the short time frame worked for you, too! I love how you put all the elements together for this card, Faith!

Sometimes you just need 5 minutes to make a card, as long as it was great to sit in the zoom class!

I'm playing catch up, Faith, and I've scrolled through all your posts to get to this one which is where I seem to have left off. Magnificent nautical theme and I love that you've done it on a kraft base! It makes a marvelous masculine card. :-D