Hello Everyone, another no news post, as nothing is going on with us, I think I need to be thankful for that.

I need to say Happy Thanksgiving to my USA friends.

Anyhow I have another Christmas card to show you which ended up not as I saw it originally. I have my lovely blogger pals to thank, for taking it out of the boring card image.

I have follower emails from different sites, that I buy from occasionally who also give freebie images and this is one of them. I could see it as a plain black and white card. So off to my vinyl and Cameo and the image was placed onto the card, I was thrilled with it. So CAS in B&W.

THEN - I had a delivery of four Distress Oxides (Yep! I've succumbed) and I decided to see if I could add a little ink, as I've seen many of you do, behind the trees to make a sunset, the sentiment needed a little "bright".  I do remember seeing a card with a beautiful sunset and I used it as inspiration, but from my memory. I wish I could remember whose it was, if it was you, let me know and I'll give you the credit it deserves, I sure it was a recent card? I usually copy the image of cards I'd like to case or something clever I would like to learn, but can't for the life of me find it, if I have copied it! I've even searched the blogs I thought it was from!

This is the result -  I did this one and then realised I hadn't allowed for the star light. I added posca pen (another new buy, to enable me to do some splatters, I didn't succeed in that either LOL) to show a little brightness, but I didn't succeed with that either!

image and sentiment - SVG Font Market
The card was coloured with
DI blueprint sketch, wilted violet and faded jeans and black soot.
with sunset being DO mustard seed mixed with DI carved pumpkin

Another card had been made, so I added a little colour with DI antique linen behind the star, before doing the background. This was done with DO speckled egg and DI black soot and the sunset being DO mustard seed mixed with DI carved pumpkin. The ink was easily wiped off the vinyl.

This shows the vinyl sheen 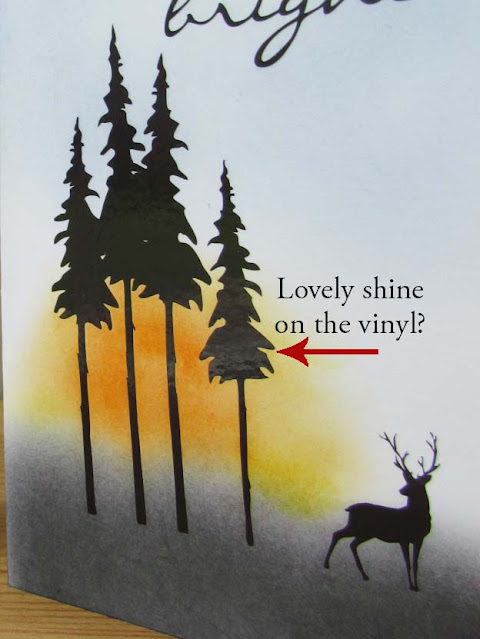 Beautiful card Faithlove the silhouette images and your oxide background-I have a few but don't use them enough.
Carol x

You aced the background Faith! Those silhouette stamps are gorgeous. Love this card!

Glorious inky backgrounds Faith and I love the vinyl silhouettes too! Enjoy those oxides!! Vicky x

Beautiful card as always. Happy Thanksgiving to you and your Family!!!

Such a gorgeous scene in lovely color! And, love those silhouette images! A stunning card!

This is a beautiful design with that glow behind the trees! Very nicely done, and thanks for the warm Thanksgiving wishes! I hope your day was a good one too!

Love how you have done the backgrounds Faith, makes the silhouette trees really stand out xx

A lovely card Faith, you have created a super background.
Pauline - Crafting with Cotnob
x

Great blending with your new oxides Faith and both cards look amazing x.

Well aren't you the clever one, Faith! Love your vinyl trees, first off. Never would have thought of that! And your inking experiments were a smashing success for a first go at it. It takes a while and practice, so just keep making more. That's my game plan and I do see improvement on mine. Congrats on the oxide use. I am still using just the distresses even though I've almost collected all the oxide pads too! LOL And reinkers! I'm a bit of a Tim ink nut, I have them but just a few stains/sprays. I decided to keep collecting as he has been coming out with new colors. Thanks for the thanksgiving wishes, we survived our feast! Take care, XOX

Faith, this is so soft and pretty! Your blending is seamless! The vinyl trees are on point!
Hugz,
Chana Malkah

Lovely card Faith. You have done well with your new oxide inks and the vinyl is striking against the background. I love it. xx

What a lovely set of cards, Faith! Your inked backgrounds look amazing!