Hi Everyone, firstly thank you all for your wonderful and much appreciated comments. I thought I would let you know the error on my bathroom bottles too, perhaps you didn't notice they were different cases? one lower the other capitals - duh! and as Linby said no dot over the i in lotion! That was a mistake in weeding the vinyl! So obvious now I've said it?

Anyhow for what you're here for today. My card was a request for something floral and a 90th birthday card asap! I have some beautiful digital florals in my files and I used one image as the background, then took another image into my Cameo and print and cut it.

I had cut a shaped circle, I blended DI's in different colours, orange in the centre and the blue and purple around the outside of the shape. I then 3D'd the cut wreath, and sentiment across the centre, the sentiment was done with metallic pens with the Cameo. I splashed some water over the background and loved the effect. A couple of gems and an insert a little sparkle pen and it was given and thankfully liked. 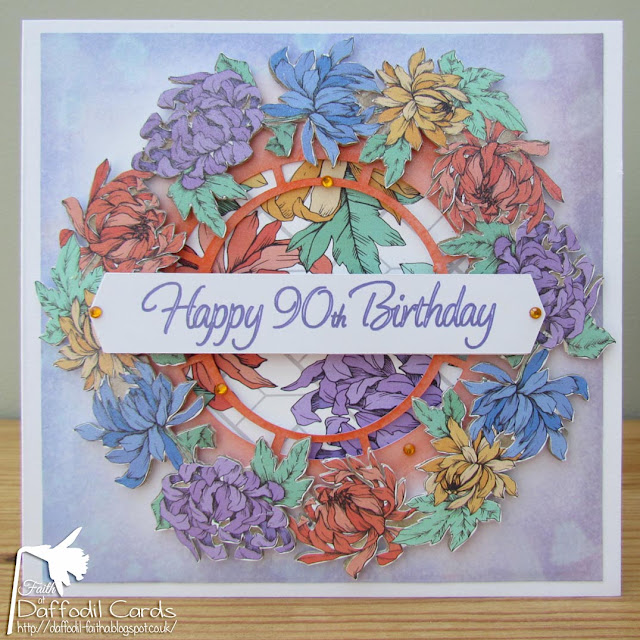 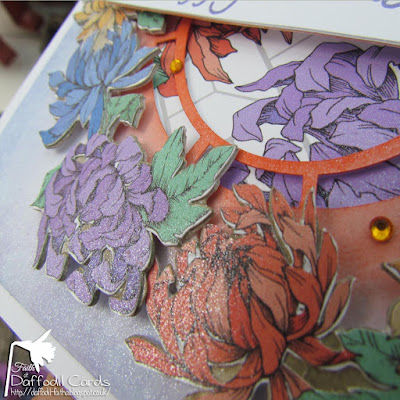 Just a little something else, I don't know about you, but we have had an awful lot of rain in the last few weeks, however we have had the most amazing rainbows too, I should think nearly every other day. If we had a break in the clouds the sun would shine and out would come a rainbow, just to remind us there were blue skies above the clouds. I got this one this week just as it was about to fade, it was VERY vibrant when I saw it first and very much bigger than the photo shows it. 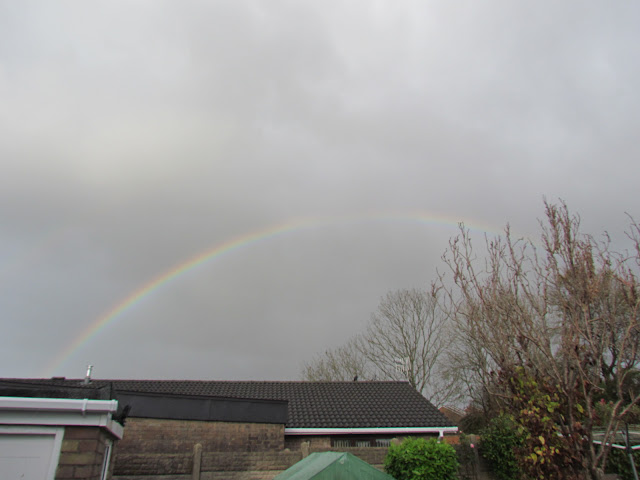 Just so beautiful Faith, beautifully designed and coloured, I'm sure the lady will love it. Love the dimension you've created with the flowers.
Weather here is awful, icey rain and a rainbow too, keep safe Kate x

Those flowers are just gorgeous and what a beautiful birthday card too! I love the subtle shimmer and beautifully designed wreath!

I forgot to mention the pretty rainbow! I love seeing photos of rainbows, so thanks for sharing :)

A beautiful card Faith, so pretty.
You did well to get a photo of a rainbow, they seem to disappear so quickly.
Pauline - Crafting with Cotnob
x

Absolutely beautiful floral wreath and wow 90th!!!We have had a lot of rain too but not seen any rainbows.I wouldn't have spotted the error of different cases tbh
Carol x

What a spectacular and beautiful card Faith. such an eye catching design and a real Wow card x. We had an amazing full rainbow this week too Faith with really vibrant colours. We do get a lot of them on the west coast of Scotland but this one was particularly fabulous x.

What a fabulous 90th Birthday card.


Great rainbow picture too. Blink and the light changes so rapidly!

Oh, what a beautiful card with all the pretty flowers!! Wonderful color and design!! I’m sure the card will be appreciated! Happy 90th birthday to the recipient!!

What a lovely card for 90th birthday!!! And a great vibrant rainbow! In Greece the weather is around 20C, no rain yet. Kisses, my friend.

A very beautiful card. The flowers are so beautifully coloured and arranged. Great rainbow pic. xx

Oh lots of work on that card, it's brilliant. We've had mostly sun but also cool fronts and temps are staying nice for once on the Gulf Coast. Pretty baubles also in post below! XOX

The card is just amazing, Faith! And the rainbow is Beautiful!

Great job Faith, it’s a lovely design and the flowers look beautiful as does the background. We have had one or two rainbows too, I love to see them xx

The recipient was no doubt relighted with this beauty, Faith. I love the gorgeous color palette and the dimension too. Beautiful photo of the rainbow too!

Faith, this is gorgeous! The background blending is beautiful! What an amazing color palette! Very nicely crafted, indeed!
Hugz,
Chana

A stunning card Faith! So beautiful! Your rainbow was a beauty too. Here it has been mainly grey with a few very small glimpses of sunshine

wow! This is just stunning - a really beautiful and colourful card.
ha ha - didn't spot the different case on the bottles did I -doh!

Absolutely gorgeous card, Faith! I had to wait 2 hrs for a grocery pick up one day recently & as I left there was a gorgeous, vibrant double rainbow--made my day!