Hi Everyone, a card today for a blog friend who has just moved house. She loves her coffee, the subject is on nearly every card she does, I can never get over the variety of cards she can do with coffee included in the subject. Because of this I had to make her a coffee / home card. I used orange on the house, as she is Dutch and it's the National colour.

Now there was one problem doing this blog post - I hadn't taken a photo of the card before sending it, I was in too much of a rush to send it. However Hetty kindly shared her card on FB and this is where I had it from, it's probably a better photo than I would have taken anyway LOL. I apologise to the other lady for cutting her beautiful card out of the photo.

Stamps, stencil, house die, all magazine freebies.
tag - shape copied from file and cut with Cameo.
card shape also cut on Cameo, as was insert
on which I wrote (with the Cameo) the sentiment.
Distress inks - Spiced Marmalade, tea dye
dye based inks - Whispers (VERY old inks)
sentiment - mine 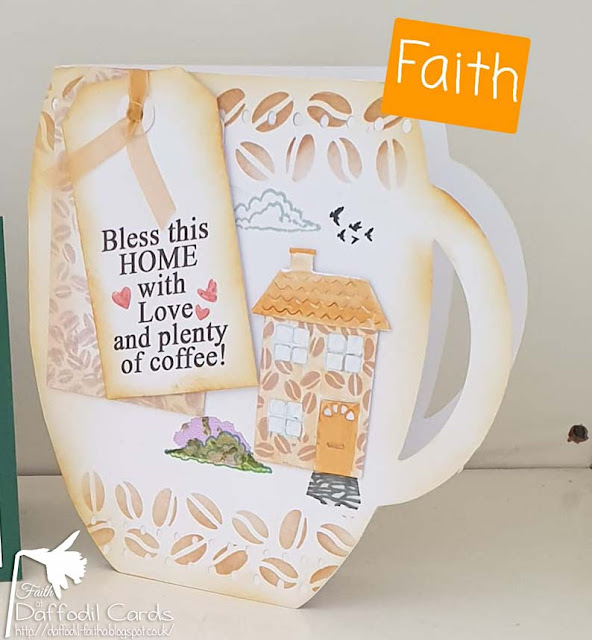 I have a visitor who arrived twice yesterday, I'm so thrilled -
a Great Spotted Woodpecker, the best photo I could get. 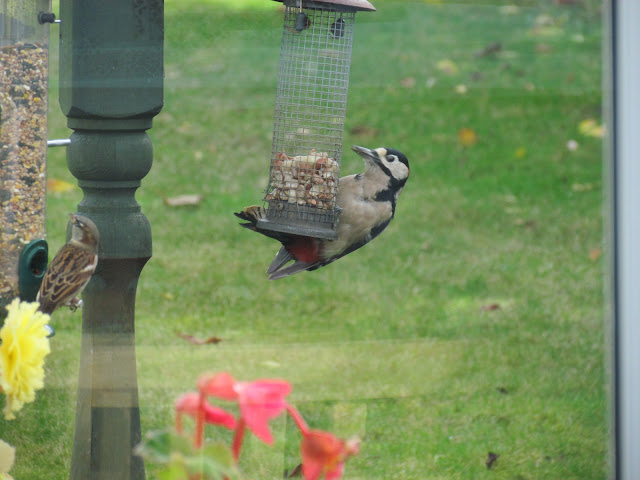 A beautiful card ,love the shape.xxx

Love love love your card - another great creation thanks for sharing!!!

That is one great card for a coffee lover! I love the added tag to the rest of the fun elements on this shaped card! Love your visitor too - they're fun to watch aren't they?

A super card Faith, a fabulous design and great sentiment - it sounds like it's perfect for your friend.
Pauline - Crafting with Cotnob
x

This looks like the perfect card for your friend Faith! Love how you combined the new home with the coffee theming. Vicky x

Such a clever card Faith, love the shape too, aww sweet woodpecker too, our feeders are full of Goldfinches mostly atm. and we are feeding a hedgehog too every night ;) Viv xx

Hi Faith, thank you again for your beautiful card. It is on display in my new home.
I love your sentiment and the coffee beans. And of course the orange color.
So many wonderful details.

Simply fabulous design, Faith! Love the creative way you were able to combine your friend's love of coffee with the move to her new home!

What a great idea Faith, it looks brilliant. Love the photo of the woodpecker too. We seem to have had a greater variety of birds in our garden this year probably due to the peace and quiet of lockdown. Hope you are keeping safe and well xx

So creative, so thoughtful and unique and she will love it Faith x.

Wow Faith, this is a great card for your friend! I love the mug shape of this card, but more than that, I love how you have "decorated" this mug! It looks amazing, the coffee beans at the top and bottom is a nice touch. But what really blew my mind was the coffee beans on the little house, what a fabulous idea! Loving that tag on it too. You are so clever my friend! Love the fabulous photo of the woodpecker! I have woodpeckers and I love seeing them, but they have about a thousand holes in my big tree. Not sure if it will kill it or not. I hope not! Hugs, Brenda

That's the perfect New Home card for a coffee-lover, Faith! And what a great picture of the GS Woodpecker hanging onto the feeder!

sweet card and what a fun sentiment....true in my case.
xx Karen

Agorgeous card for your friend! Love the coffee beans. Lucky you with your woodpecker. I'd love to see one in our garden but I think we are too far into the city suburbs for that to happen.

What a super shaped card with the coffee theme for a coffee lover. Top marks.

Aren't you lucky getting a visiting woodpecker. Never had one in my garden.

Such a wonderful coffee card & perfect for your friend's housewarming! Great woodpecker photo, Faith! I need to share the one I got while Fritz & I were taking a walk the other day.

Oh yes, Hetty loves her coffee! I remember her from years ago at Technique Junkies. That's a great card! And congrats on that woodpecker sighting, xox