Hi everyone, well after 5 months I have had my hair cut today, it was January when I had it cut at the hairdresser, they went into lockdown as I was due a cut! (hubby had taken an inch off the back though.) It was all done so well, with a mask given, although I had my own, my temperature taken and a hand sanitiser for me to use too. I think she is a great stylist, but I always wash it as soon as I am home, as I don't like how she, or any hairdresser, styles my hair after a cut. Fussy so and so aren't I?
On to why you are here! after doing my comments and emails, I thought I would just browse my files. I have seen quite a few digital stamps and paper used recently and as I didn't feel like doing much on a very wet afternoon I decided to see what files I had, (forgotten about!) There were a LOT!
I came across this lovely watercolour pineapple and background paper, I decided to use them and this is the resulting card. I added them to a shape in my Silhouette Design page and added a digital die to the centre, then after cutting them all out, I added them to a card and also the sentiment. The centre pineapple is layered 3 times. I wanted to print and cut the image, and also to cut it out on one page of paper, it took me longer to adjust them to fit on the page that to design it! LOL
pineapple and paper - Creativefabrika
digital die - Silhouette #14365
Nuvo Drops - Tonic
sparkle pen - Spectrum Noir 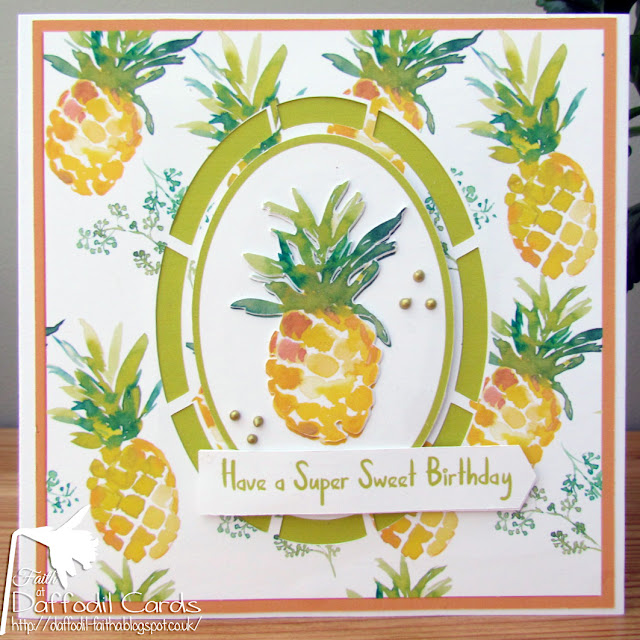 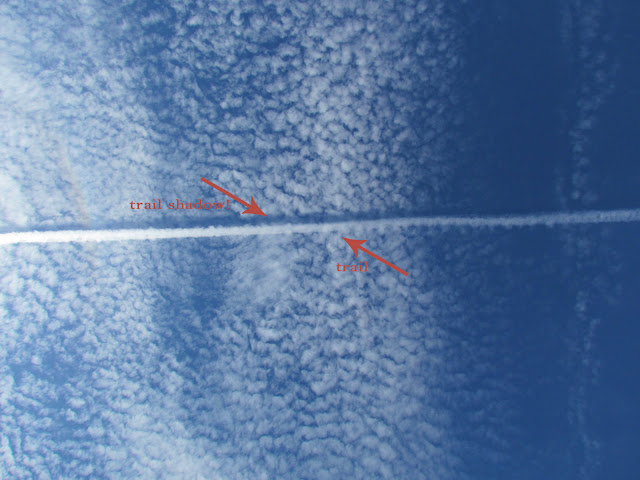 A closeup of it 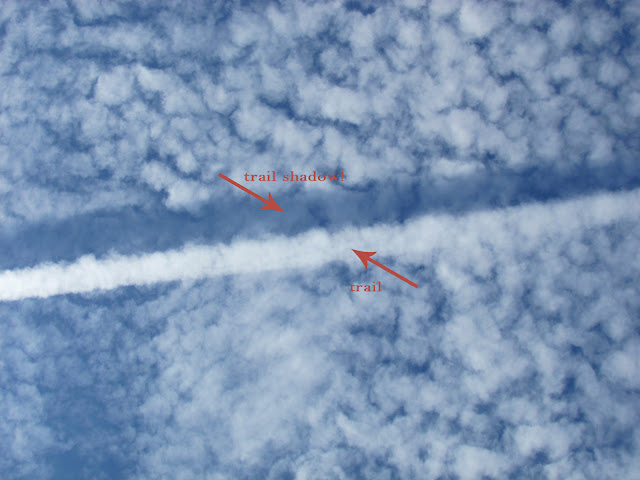 This is where it had moved to the left and was still a trail,
where the original had almost disappeared!
The smaller trail had also nearly disappeared. 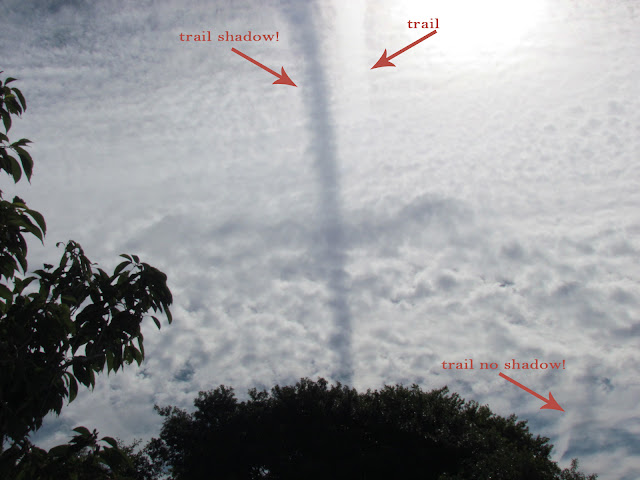 EDIT - After Shirley's comment I went to Google and found this explanation, seems it's not common, so was thrilled to get a photo of it.
Contrail shadow
Keep safe everyone.
CD Sunday  Digi - Yep!
LiL Patch of Crafty Friends ATG - Yep!
Scrappin4fun Challenge  Birthday - Yep!
Posted by Faith A at Daffodil Cards at 18:23

Fabulous shine coloured card love the design and the pineapple paper.Feels good when you have your hair cut and not fussy just used to how you style it lol.Very weird looking trail!!!
Carol x

Wow, so gorgeous! I love the fruit card and your plane trail is pretty cool.
You are so much like me! I always wash and style my hair after getting home from the hairdresser. I had gone quite a while with gray roots and longish hair. So I colored my own, which did not turn out as well as the hairdresser. After two washings, the roots were there again! And I took a pair of scissors and just started cutting all the way around my head. It turned out pretty good considering I did not know what I was doing. Since then I have had my hair done a few times and go again Wednesday. Hopefully, we won't be in lockdown by then.

Love the pineapples Faith, great card. Going to the hairdressers last Thursday was the highlight of my week, I told her if we go in to lockdown again I’m leaving home and moving in with her - can’t wait that long again !! Never seen a plane trail like that, I googled it and I think it may be a contrail xx

A fabulous card Faith, I love the Pineapples.
Pauline - Crafting with Cotnob
x

Lovely card, Faith. I love pineapples, actual pineapples to eat and pineapple images. :-D
What incredible photographs of the con trails! I've never seen anything like it in the sky although I have seen shadows on the ground of a con trail from the window of a plane in which I was flying. It took a bit to figure out what the dark line was on the ground that seemed to keep pace with the airplane which had to be flying at more than 200 mph. :-D

Beautiful work Faith! I appreciate pineapples so much more now (not living in Hawaii) than when I did (kids don't usually appreciate fruit and botanicals). They touch my heart! You've reminded me I need to make hair appointments for my daughter and I~I look savage!

Glad you got a good haircut finally and I used to wash my hair and re-style it too after coming home from getting a haircut! LOL Great pineapple card with those pretty images and colors! Your photography skills for the skies are amazing too. I've questioned all the trails in the skies for some time and there's never been a logical explanation for them to my knowledge, but this shadow effect is a first even for me! You did good!!

Ha, I need a hair cut too Faith! Mine hasn't been cut since last Sept and I was going to make an appointment to get it cut when Covid hit and we shut down. Still haven't gotten one, so it is more than half way down my back. Yes, I NEED a haircut! I don't let my gal dry my hair because I don't like the way she styles it either. All other hair stylist could work with my hair, but not this gal. So I just come home with it wet and style it myself. So no, not fussy because I'm the same way! lol I am loving your pineapple card! The watercolor digit paper is fabulous and I love how you took one pineapple and made it into a digital die. Love that frame too, it pulls the eye in to the center on that beautiful pineapple. Wow, I've never seen a jet trail with a shadow before Faith! Those are great photo's of it! I figured it has to not be common because I've never seen one before and how cool that you got a photo of it! It's very interesting to say the least! I will have to read up on it. Hugs, Brenda

A pretty card and great sentiment. Thank you for sharing with us.
Jocelyn x
CD Sunday Plus DT

I love pineapples. Great Job, Thank you for joining us at Scrapping4funChallenges Candi DT Member

Fabulous card.
Thank you for joining in with us.
Carol xx
CD Sunday Plus DT

This is a great card, such fun.

Thank you for joining in with my challenge.

Beautiful card, love the Pineapples! Great pictures with the trail and shadow!
Thank you for your lovely entry at Scrapping4funChallenges.
Rachelle DT
https://scrapping4funchallenges.blogspot.com

Wow--I can't even get a picture of a bird in my yard! I love your pineapple card, Faith--beautiful!

Forgot to say--glad you had a good experience getting your hair cut!

What a fun design, Faith! Loving all the pineapples!

Yes I still need a hair cut and colour Faith...it's 21 weeks now!
The pineapple paper looks fabulous and your card is vibrant and happy x.
Weird about the trails and so glad you got a photo to of it...well done you x.

Love the pineapples, so sweet. As for the trail, how interesting. I doubt I would have noticed lol!