Hi everyone, I am so VERY excited, I asked for some vinyl for Christmas, thinking I didn't want to waste MY money (in case I didn't like it LOL) and do I like it? I LOVE it. My first project was a wall decal for my Son's room, he wanted an affirmation, so I made "Believe in Yourself" which is placed over his computer. I also had pens and a new mat, more of the pens in a later post!

Then I HAD to do something else, so I got a sentiment and the flower image from Create with TLC and instead of printing it out, I placed it in on my Cameo screen and sent it to cut out from the vinyl, I was thrilled to see that it had cut so finely, then transferred it to my Cameo, as I WOULD be bored without my crafting. What do you think? 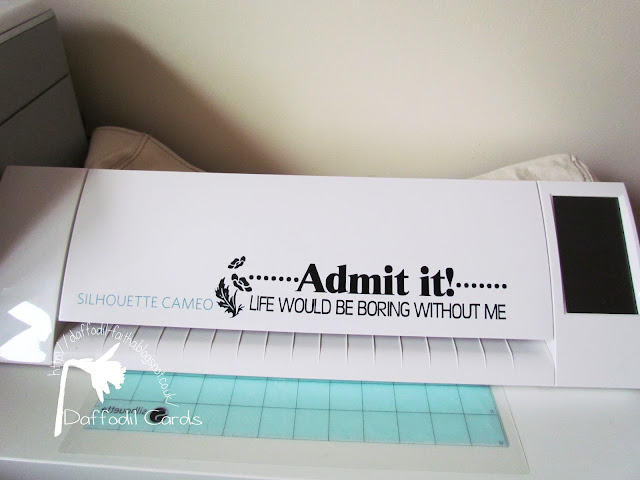 What a fabulous sentiment! It deserves pride of place on your wall!

brilliant...ive not yet tried using viynl..and i would love a cameo...i know my silhoutte portrait does the same , just a4 size..would be nice to do bigger though lol

It is fabulous Faith, it certainly did cut beautifully - it sounds like you were pleased with your presents.
Pauline
x

Kudos to your skills AND your bravery with the vinyl! I've never tried vinyl (as I'm a poor cameo user...it's gathering dust). Love that your 1st effort was this inspiration for your son too. Good for you at forging ahead to make some more sentiments. I have a stencil class on Jan 23, so I hope the teacher can show me how to cut some stencils. (Yeah, like I use them a lot! LOL). Hope 2017 starts off happily & all things work to make you happy. Big hugs & TFS - your vinyl skills will soon match your PS! Awesome.

Wow, Faith, you got a wonderful machine there. I have seen it working and it can do fabulous things! I have looked at it, but I am not sure if I can operate it well enough. Will continue seeing your adventures with it and let me know how you do. For now i love the cutting of the sentiment!

I love this I have just started with vinyl also and I am having a ball with can't wait to see more of your creations thank you for joining into our challenge at http://classicdesignteamchallenge.blogspot.com.au/...

This is such a coincidence Faith cause I decorated my Cameo over Christmas, I'll post a photo on my blog so you can see. I love working with vinyl and even use it for my card making, it works really well with acetate. I love the the sentiment you used, most appropriate !!

It looks fabulous! ... and I thank you for the inspiration. I've still got my two year old Silhouette in the box! I need to get it out and learn how to work it!

Your talents amaze me - brilliant work. Do you teach others how to do this kind of craft, and if not, you should. lolx

Great sentiment Faith and it looks fab on your Cameo. I love cutting vinyl and using heat transfer vinyl too. It's such fun. Happy New Year to you as well x

It's beautiful! Welcome to vinyl. Next, you will have to try heat vinyl for shirts. It does great. I even put it on my laptop computer carrier.


wonderful creation
Thank you for sharing with us over here today at the Classic Open Design Team Challenge and best of luck with your entry.

Cool! Love the sentiment you put on there:) always fun with new goodies.

Life would certainly be boring without crafts! What fun, Faith!