Hi everyone a birthday card made for my Great Nephew using an image I won at The Outlawz challenge. He was playing for a large club, but decided to much "politics", shame as he was doing so well. Not his "path" it seems. 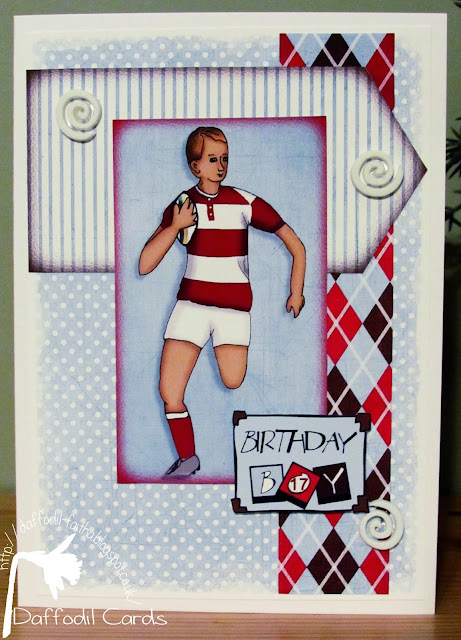 Fun image. Perfect for the rugby player! Great papers too, Faith and sentiment!

A super card for a young man Faith, such a shame the large club wasn't his cup of tea.
Pauline
x

Such a super card! The image is fabulous and I love the way you've added the age to the "O" in "BOY"! Happy birthday to your great nephew!!

What a great birthday card and image!

Hi Faith, What a brilliant rugby card, shame it's not going to work out for your Great Nephew but good on him for knowing what he doesn't want to do :D Gay xx

Super design Faith and a great image, you have been busy while I've been away - some great projects xx

Great card, and it's so fun how you placed his birthday age on the sentiment! Fun!

A very cute card. I love the paper.

Great card - a pity about the politics, seems the way in lots of groups!

Perfect for a guy!