For the Love of a horse!

Hi Everyone, today I have a card with an image that is SO like my Niece that I just had to buy it. It's her birthday coming up in a few days and from a small child she has had a great love of horses, so her card shows her as she usually is, (not sure about the horse though LOL) with her beloved Azucena. She has had the horse quite a few years after seeing him on a holiday in Spain and falling in love with him. After returning home and a few weeks of negotiation, she drove back to Spain and brought him to the UK. He has won a few shows and competitions for her. I think she said he is an Andalusian horse. Photos below.

The black is card, the blue is a "Grungy Action" in PS. I printed 2 of the images out, one I had coloured in PS and one to be coloured with my SN markers, which this is. I kept the digi one in case I coloured it badly. I had added a "Grass Brush" to both (I forgot to take edit it off before printing the one to be coloured.) then tied a twine into a bow. The sentiment which I thought suited her well was from the web. 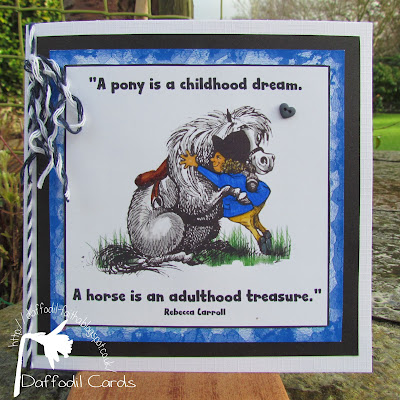 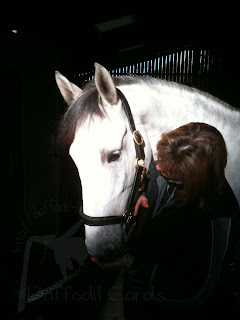 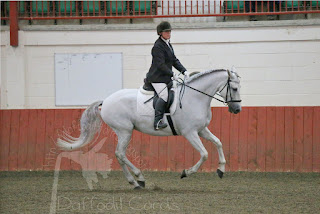 The image is Thelwell Hug
Posted by Faith A at Daffodil Cards at 08:00

Well your niece is going to love this card Faith. Her horse looks very handsome. I have a close friend who owns a horse and I know looking after it is very hard work - especially in winter !!

This is so cute! Love that image and your coloring and the sentiment is perfect! She's going to love this - Great pics by the way!

I am sure she will love it, Faith! What a gorgeous card!

This is a gorgeous card Faith! And perfect for your niece! I adore the sentiment too! xx

Oh my, what a splendidly gorgeous creature. He is so graceful, and she must be a terrific rider. Congratulations to them both for being a winning team. Our DD loved horses from childhood too. Now she has greyhounds, and we've always been thankful to not see a horse in her life, as they are tremendously expensive to own & maintain. She does occasionally go riding though. Your card is delightfully colorful, a perfect image for this young lady, and so cute. Also a perfect sentiment for this occasion. TFS & have a great week

A super card Faith, such a fun image and great sentiment.
Pauline
x

Beautiful card Faith and what a perfect image to use for your niece. The blue works so well with this design, she is going to be over the moon when she gets this!! hugs :)

What a beautiful horse and a perfect birthday card for your niece!

I think the relationship between the horse and girl is such amazing bond that will grow as she grows up. Beautiful card.

Oh this is such a sweet card! Wonderful image.Beautiful coloring.

This is a really fabulous card. I love the beautifully coloured image and your lovely layout.

A great card and a fab sentiment to go with the image - beautiful colouring too.

You do really beautiful work!