Hi Everyone, a card with an image supplied by Gerda Steiner Designs on the Outlawz Progressive Challenges, isn't this the most adorable image, I had a lot of fun colouring him. I designed and coloured it in PS. I have been learning more detailed colouring in PS and I think I understand a bit more, which in fact now helps me with my alcohol markers colouring, strange as it sounds.

In fact when I printed it out, the skin colour was practically white, I still haven't found my favourite colours in PS, drat! anyhow. I coloured the face with SN's. and followed this sketch. I printed out the DP's and cut them with my square dies, I made a png file in PS to make a cut file for my Cameo of the silhouette pumpkin. The dark paper has been made using an overlay in PS. 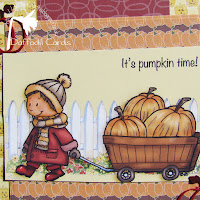 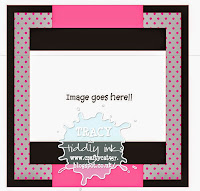 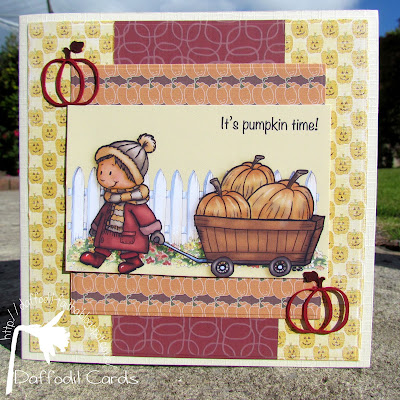 Posted by Faith A at Daffodil Cards at 15:30

This is precious, Faith. Fabulous coloring of the sweet image. Thanks so much for joining this week's Pumpkin Challenge at Eureka Stamps!

What a fabulous card, Faith! I recently discovered Gerda Steiner's images. This one is really adorable! The little pumpkin embellishments are really sweet too! :o)

r lovely card and such a good interpretation of the theme. x

A super card Faith, such a sweet image and great papers.
Have a lovely weekend.
Pauline
x

Fabulous card Faith. Such a cute image and your colouring in both PS and SN markers is beautiful I keep saying it but you create magic in photo shop. hugs, Pat K x

Wonderful card Faith and your colouring is brilliant xx.

Fabulous layout and image .Thank you for joining us at Ike's World Challenges good luck Ginny ♥

Lovely fall card and such great color. Thanks for joining us this week for our pumpkin challenge at Eureka Stamps. Karal DT

OH gosh that's so very cute and adorable and such a perfect image with gorgeous colours. Thank you for taking the time and sharing your creativity with us Love 'n' hugs Sall IkesWorld Challenges DT

I loved playing with this cute image, too. Your card is awesome! Thank you for sharing at Ike's World Challenge blog!

Brilliant image and layout.Thank you for joining us at Ike's World Challenges good luck Ginny ♥

Love the little pumpkin embellishments. Thanks for joining us at Eureka Stamps.
Mary

Your face coloring is wonderful, Faith! You're going to have to stop saying you don't "colour" -- faces are the hardest to do and, if you can do those, you can do anything. :-D

A lovely card and greeeeeaaaat colouring :-D
Thank you for playing along with us at IKEsWORLD CHALLENGES and good luck in the voting :-D

My Challenge Blog
My Shop
My Blog
FB Fan Page