Another request, for an 18 year old who has damaged 3 cars, I was told to include a car! not sure if this was a message for him?

I followed this sketch, I think it makes it so much easier for a quick card, or otherwise really :). I didn't follow the colour scheme as you can see, that was already decided with the image I chose.
I chose a digi stamp by Charmed Cards and Crafts named Driving Mikey, it turns out that the image looks like the boy it's for, how fortunate I thought LOL the image is ready coloured or you can do it yourself, this time because of the time frame I used the ready coloured.

The papers are by Gina Jane at DAISIE.  I looked for a font that made the word Vroom look like it was speeding through and found this called Speed of Oatmeal. I cut out the Vroom on my Cricut with Fairycuts, A border of cars was needed, why? just did! Anyway, I looked on the web for a car and found one, so I then made it into a border with Fairycuts. The tag is a freebie from DAISIE I've had for years I then used jute twine to tie a couple of knots. 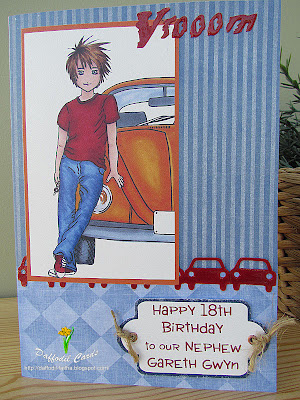 Not really a quick card with all I made to cut, but I think it was worth it, in fact someone else who saw it wanted the same so it was not a one off as my cards are usually.


I'm going to add this to the following challenges -

Wonderful details from the teenage boy to the row of cars and even the VROOM! I agree. It's fantastic!

Lovely card, Faith! I never think of using the pre-coloured images ... very clever when you've already outdone your time on the layout.

Thank you too for stopping by my blog, to comment upon my Thanks Sew Much card. I too use Fairy Cut, in fact, I think I was among the first in the states to endorse it for use with the Cricut. I've not updated it, so I do have the capability to continue to use it with my Cricut, though now that I have my Silhouette Cameo, I can keep both machines humming at the same time.

Have a blessed day!

You never cease to amaze me with what you can do with PS Faith! This is a great card and so is your geneology one too. Sarah x

what a lovely creation and a great masculine card, thank you for joining us at the Secret Crafter Saturday Challenge
Hugs Kate xx

Oh this is so fabulous, love it.
luv
Debby

This is just ideal for your request! Love the digi you've found. x

What a great idea for a teenage boy! Beautiful coloring of the image! Thanks so much for joining our challenge at Our Creative Corner! Hugs, Marcy

Handsome card for your nephew. :)

Great job on this one too Faith! I think your Vroom letters are wonderful, and I like the way you tied the sentiment.

This is a brilliant card, the embelishments are fantastic. Thank you for the kind words on my blog.
Hugs
Suzie xx

You are a roaring success with your cards `faith and im not surprised you always manage to come up with the goods and in spades ( whatever that means ) Another great card from you.

Fab boy's card - love the little car trim!
Thanks for playing with us at the Secret Crafter Saturday Challenge!
Helen x

Fabulous project! Really pretty.Thanks so much for sharing with us at Our Creative Corner this week.