I have been on a roll, and after seeing these challenges, decided to do another post tonight.

My great nephew lives in Belgium so I decided to make something from "home" for some reason, I decided to send a card with a telephone box on, but then thought, I wonder if I could make a cut file out of it, so off I went looking for pictures to give me a clue and found a telephone box George V style. I opened up Photoshop, got some lines together added a few shapes, linked them all together, put a crown on top and then printed the "TELEPHONE" onto it.

Next step was to save it as a jpeg and import it into Fairycuts my cutting program, I had to play about it with it again A LOT!!! but in the end was able to save it as a WPC file. If anyone wants it, send me an email.  As the word and crown were cut out, I added gold card behind the crown and black behind the wording.

Here is the card, I used Mikey from Charmed Cards and Craft, added 14 for his age and a Union Jack onto his T shirt, then thought it too plain, so added some Union Jack flags done in PS, I waved them so they looked like they were in the wind. Placed them onto a narrow ribbon and glued it to the card, with 3d pads underneath the front end, hoping they look more like flying in the wind LOL.  I added acetate behind the front to make it look like glass, perhaps you can see the shine in the photo.  I printed the sentiment on the card, inside it says "because it's your birthday" 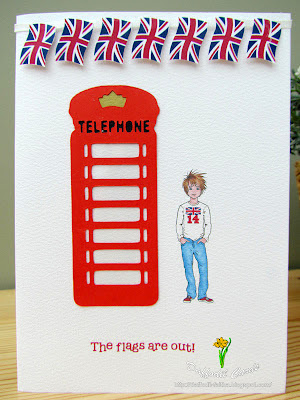 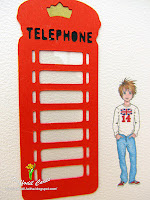 I am going to enter the following challenges with this card

That is so cute, love it. Thanks for playing along with us at Inky Impressions Challenges. Hugs, Anita

You are so amazing with the computer! It's all so beyond my comprehension how you did this, but I love it. I'm sure your nephew will be so impressed.

Cute card. Thanks for joining us at Inky Impressions.

Great card for our "For the Boys" challenge! Love the image you have chosen! Thanks for sharing it with us at Send a Smile 4 Kids. Come back again soon!

oh this is fabulous .. i just love that phone box .. perfect for all the British themes around this year
Lisa x

Love the telephone booth with the great image an the banner is so fun! Thanks for joining us this week @ SAS 4 Kids for our "For the Boys" challenge :)

Superb Faith! I love the phone box. Whilst out walking one day we saw a house with a huge garden and a red telephone box in their back garden! x

what a fab card... very british lol... thanks so much for playing at Inky Impressions xx

Such a lovely card and so clever of you to do it all. Thanks for all your lovely comments. Warm wishes

What a cute card! I love all the flags you added to this! Thank you for playing along with us at Inky Impressions Challenge this week!

Wonderful! I love it!

This is so cute and so creative! The phone booths are almost a thing of the past now a days with cell phones!

A great card Faith, I love the idea of putting acetate behind it to look like glass :) I'm sure your great nephew will love it! Sarah x

Wonderful masculine card! Great work with making the flags have movement...looks great. Thanks for joining us at SAS4Kids

Faith this is just amazing ! Love this wish I knew how to make my own cutting files as I have the Cameo and it would be a huge advantage. Perfect for a guy and love the clever sentiment.