Hi Everyone, February and March is a busy month for birthdays in our family, so be prepared for lots of cards hahaha. Anyhow todays card is for my eldest #1 brother (I have/had 4) and a card with a story.

He started his working life as a Fireman on Steam Engines in 1952. At Old Oak Common in Swindon. Put the clock forward nearly 70 years and he and my SiL went somewhere, it could have been Bridgnorth. They, or at least he, likes to visit places where he can see working Steam Engines. On one of their visits he came across this engine and realised, by it's number, it was the first engine he worked on, can you believe that? He was so thrilled, he told the Driver of the engine the story and he asked if my brother would like to go onto the footplate (where the driver and fireman worked.) He jumped at the chance and the driver even gave him his hat to wear for the photo. My brother still has his Fireman hat he had worn on the railway.

He had sent me the photo and I thought, as it meant so much to him, to use it for his birthday card. In Photoshop, I added a mask to make the photo a little more interesting, then printed the papers I had chosen and layered them onto black card then to the base card. I also generated the greeting in Photoshop. I don't know if you can make it out, but the layer the photo lays on, is a picture of coal, well! he did handle a lot over the few years he was on the Great Western Railway, known as GWR or Gods Wonderful Railway to enthusiasts.

My #2 and #3 brothers were also Firemen on the GWR, and I remember them sitting together on a visit home once, listening to a vinyl record of a train going through The Severn Tunnel, yep! they love the Steam Engines hahaha and relating what the fireman and driver would be doing, step by step, going through this long tunnel and being enveloped in smoke. Ah! wonderful times even for me, listening to my brothers reminisce and enthuse about the sounds and memories.

If you are an enthusiastic, ahem! you can find everything about this engine HERE 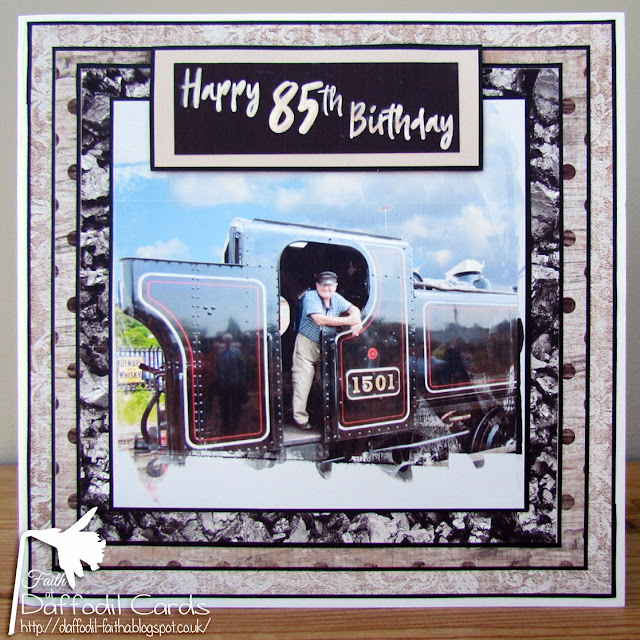 This is the insert with the larger photo, which
I also masked to make it more of the engine and my big brother. 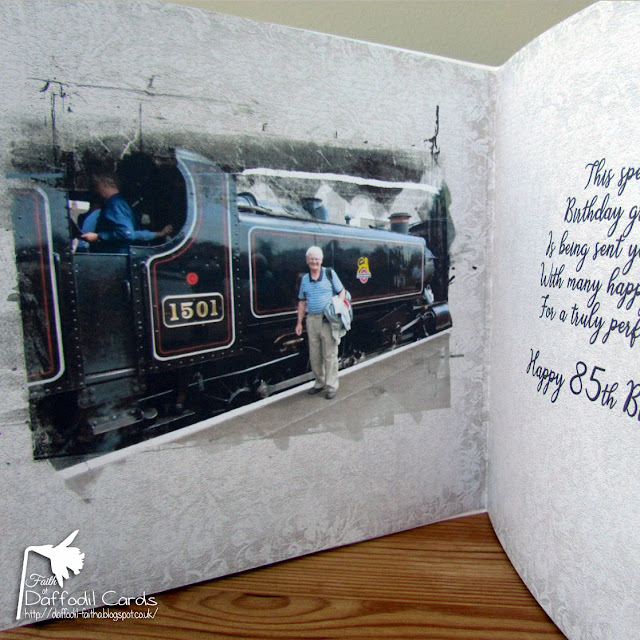 Just a little something, I have "prove you are not a robot," coming up when I make comments, has anyone else got this problem or is it just me, if it's just me, how do I stop it - please?

Morning Fiath, what a lovely story and insight into your brothers lives, the photo is perfect for his card, I am more than sure he will treasure it, its wonderful and thoughtful. I hope he had a lovely day.xx

A super card Faith, such a lovely story and great photograph.
Pauline - Crafting with Cotnob
x

Fabulous personalised keepsake card love the photo and great story behind it.The robot thingy has cropped up on a couple of blogs seems so appear for a while then disappear!
Carol x

Great personalised card Faith.
Haven't had the Robot message pop up at me. Only seen it as a tick box on blogs, which I just ignore!

What a fantastic card for your Brother. I am sure he will love it! My father in law worked on the railways at one stage and has lots of stories too.

What an awesome personalized birthday card. Of course he will love it. Great to hear the stories too!

What a lovely story Faith and I bet your brother will be thrilled with the card. We had a friend who was a GWR fanatic and I used to try and find images to make birthday cards for him, sadly he is no longer with now so I don’t have to do that any more. I got the robot thing last week but it seems to have disappeared now !!

Hi Faith what a fabulous story and to fine the actual engine your brother worked on after all this time must have taken him down memory land indeed.
Your card is fabulous, great design incorporating the photo, this will be a keeper, Kate x

Wow, Faith! You are so creative! What a fantastic and super special card you have created for your brother! Brothers are a wonderful thing! :o)

Such a wonderful story!! Fabulous card that you created for your brother...so unique and special!! He will love it!!

Wow, awesome card, Faith and what stories your brothers must have told you.
I love how you framed the picture in the front. Your brother must be so happy he can display these pictures now.
May he have many more years to tell them.

So very awesome! Love the story and love the photos! What an amazing memory!

Lovely card and interesting link.... a pannier was the first engine PJ worked on when he started at Tyseley....L94... hope your brother has a good birthday.

Wow Faith, what an amazing birthday card and what a story to boot! I love how you used these special photo's and made a special birthday card. I can't believe your brother actually found the first and original train he worked on! That is just the coolest and even cooler that the man there let him come aboard. Very special card indeed and you made it even more special using these photo's. Love this! I haven't had any "prove your are not a robot" come up. I see them when posting, but don't do them. Does it "pop up" on you? Hugs, Brenda

What a wonderful personal card Faith - he will love it and the memories it will bring back for him. One of my uncles was a steam train fanatic and travelled all over the place to help on the trains. He even built a track on land at the back of his house!

I haven't seen the robot pop up, just the usual tick box one that everyone ignores. Vicky x

I so enjoyed reading this post Faith. What amazing memories and well done you with the masking too x. A really stunning card x.

Fantastic card Faith. How great that you are able to create such a gift that will bring back so many wonderful memories..a treasure for sure. I watch "Escape to the Country" and have seen many old steam engines featured that look similar to this. They are showing 2015 episodes here now and I save all the ones that are filmed in Wales..such a beautiful country. Daft I know but I want to show them to family whenever we can get together again. Take care. xx

What a great story and keepsake. I'm sure you're brother will love it.

Oh my goodness--this is so incredibly special, Faith! What a wonderful story & card I know he'll treasure!

What a fantastic card - and such an amazing story!! How incredible was that - and even better given that the Driver was so welcoming too!

I have "prove you're not a robot" come up every so often but thought it was based on the settings of the blogs on which I'm commenting. Please let me know if happens when you comment on my blog and I'll try to get rid of it!

You do such lovely personalised work and this is no exception - a fantastic piece.
L x