Hi Everyone, my offering today was influenced by another poem by Gill Reed about an elf! He was tired of snow, I wonder how many of you are? 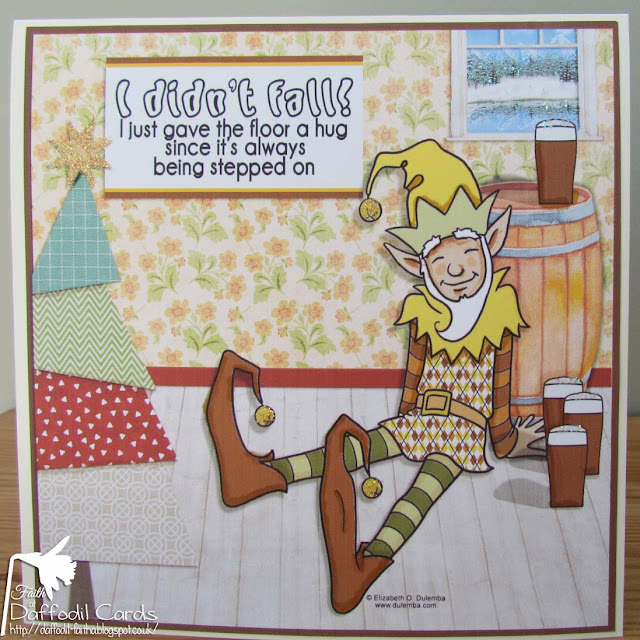 Santa’s Little Helper was tired of the snow

And being elf sufficient, he found a place to go.

To leave the Pole he thought would be a barr-elf-ul of laughs,

If only he could find himself on someone else’s staff.

In his dreams he saw himself an elf-made millionaire,

The welfiest elf you’ve ever met, with skills beyond compare.

A career in hospitality was his big idea

An empire built on cocktails, spirits, wine and beer.

He found a bar in Benidorm and named the place El Fin,

He put a sign beside the door, “We are open, now, come in.

Rest your feet, have a drink and be our special guest,

I personally guarantee, elf service of the best.”

Elf and safety laws were never on his mind

And very soon his guests took sick – the salmonella kind.

The police arrived, arrested him, for causing an offense

In court the judge declared, “There is no elf defence.

I say it every time,” she said, “punishment must fit the crime.

A life behind bars is what you’ll get, your pour decisions you will regret.”

This had to go into the Sisterhood of Snarky Stampers
Posted by Faith A at Daffodil Cards at 08:00

What a fun poem Faith and it made me giggle....Thank you x.
Your card made me laugh too and what a happy elf and love the funny sentiment too x.

Such fun! Both the poem and your card!

What a clever poem Faith, made me smile. Love the card too. We had snow on Friday but thankfully it had disappeared by Saturday, I only like snow if I don’t have to go out in it xx

LOL - love your card and image thanks for sharing!!!

I love the cute card and fun poem too! Thanks for the giggles today :)

This is so cute! I love the sentiment and that delightful image! Another cute poem!

Love the card, Faith, and the wallpaper, and the tree, and the poem! I guess I just love it al. lol

Loving your card, Faith, fun and beautifully made.
Great inspiration that poem.

Great card inspired by this fun poem! Awesome mix of elements to bring this card together. Thanks for joining the fun at the Sisterhood of Snarky Stampers!

A fun poem perfectly matched with the fun and beautiful card! I love the sentiment!
Kisses, my dear friend.

What a fabulous card Faith, I do love your elf he's such fun, super colouring too.
The poem is pure dead brilliant, really made me chuckle, Kate x

Another fabulous Poem Faith and a super card to go with it, such a fun image and sentiment.
Pauline - Crafting with Cotnob
x

Dear Dear Faith, I have been chuckling at those poems whilst having a catch up here. So enjoyed your history too! And all your cards are delightful. Boy, Pixel Scrapper's mention brought back memories. Although I did try digital, my fingers just could not take all of the learning curve so now I happily do the hybrid digital stuff that helps me and leave the rest to capable hands like you! I had forgotten I'd used Paint Shop Pro since the 1980's! Back when Jasc owned it. After Corel bought it, I became less and less happy and moved to Photoshop Elements which is more than enough for me. XOX

LOL!!! Awesome Elf card! And yes, it had to come to the Sisterhood! Thanks for joining us at Sisterhood of Snarky Stampers!

Boozy elf cards are totally Sisterhood material! So cute!!! Thanks for playing along with us!

Thanks for the chuckle Faith! Love this cautionary tale and the fab card! Vicky x

Lol! that made me chuckle!

Great fun! Thanks for joining us at The Sisterhood of Snarky Stampers, Jo x

Poor elf - both on your fun card and in the poem!! The sentiment on your card is fabulous! I've not heard that before!

We've got snow here although most melted today due to rain.

Too cute and so fun.. I love the tired little elf.