Hi Everyone, Well what a world we are in at the moment, one of my nieces is a podiatrist and has just rung me so very worried about her business and her livelihood. There are many people in business that are or will be affected by this virus. Such worries for every business - except the toilet roll industry whose products are getting very hard to buy and last Friday were the only shelves empty in our local supermarket. Well! I had to find a little humour? in all the bad news.

Onto why you are here. I was asked by my neighbour if I would make a card for her Great Grandson for his first birthday, however he was being Christened on the same day and she wanted to add a photo to the card and didn't want it religious.

After lots of talks and her coming in to choose the elephant she wanted, out of the quite a "few" I have in my files, she chose this one, which actually turned out the best she could have chosen, as it has an svg cut file to use with my Cameo.

Anyhow, I put it all together in Photoshop, then instead of printing it out as I would normally, I transferred the picture to the Cameo and made shapes to match. I also used print and cut trees, as they were so pretty. On the blue card background I used the foil pen and had Cameo to write the sentiments in silver foil. Cutting the elephant out was quite easy, but I had to add a photo on it too. I had recently seen this tutorial by Verity Biddlecombe and thought I would try it on the elephant. I'm thrilled to say it worked and my neighbour was thrilled with the card. 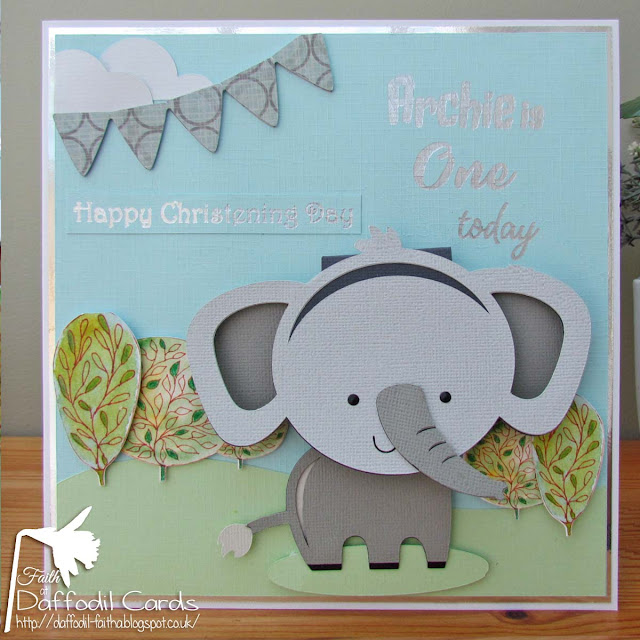 this is where the photo will be added 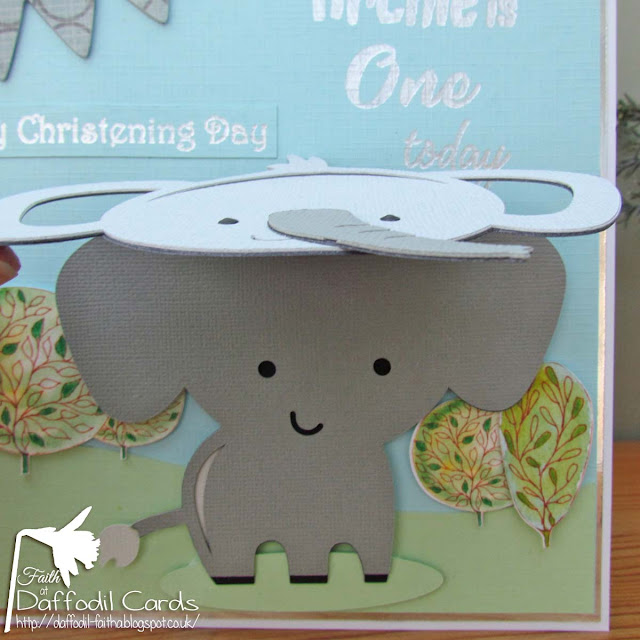 this is the insert 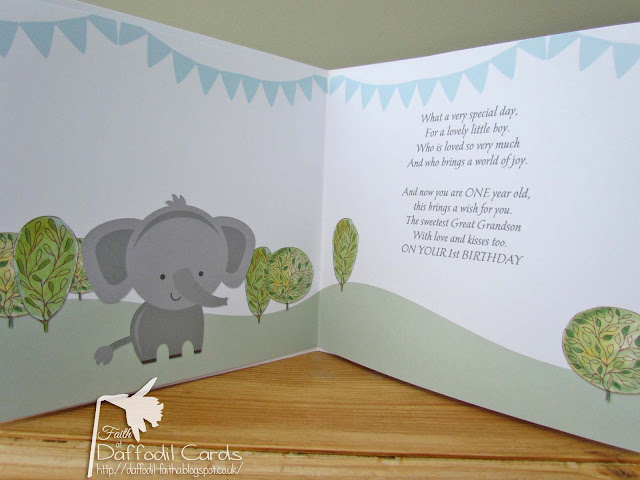 Posted by Faith A at Daffodil Cards at 12:07

This is precious Faith. I'm amazed how you make all those little scenes. I love the little banner too!

Toooo cute - love your card thanks for sharing!

Hi Faith, what an adorable card, love the elephant image and your design.
I felt guilty on Friday when I was forced to by a pack of toilet rolls in tesco, it was a 20 pack, absolutely all they had, all I wanted was my usual 4 pack. Today in both Aldi and Tesco, not a toilet roll to be had, nor paracetamol either. I'm astonished at to selfishness and greed of humans...it's why I love animals more lol.
All this is not helped by the completely contradictory info coming from the government, seems they want that everyone catch the virus even although some people will die, but it will build up others immunity, can you believe it!!
Anyway, that's my rant for the day, you keep safe, Kate x

Such a cute card Faith, a lovely design and the foiling adds a special touch. Our supermarket didn't have soap in any form - my neighbour asked me to get her some as she has serious health issues and didn't want to go herself. At least there must be a lot of very clean people about !!

What a beauty, Faith! I do not a Silhouette Cameo and I do not know Photoshop. But you are so good with these! Of course your neighbour love this card. Hugs, my friend.

What a darling card! I love the way the scene extends to the inside of the card too!

There's no toilet paper here either!! It's bizarre! In the papers today, there was a story that people are going to the hospitals and stealing the toilet paper. Ridiculous!! Stay safe and well, Faith. xox

What a thoughtful, unique and clever card Faith x. Absolutely adorable with a great design nd a fun little elephant....loving those trees too x.

Of course your neighbor was thrilled! This is just darling, Faith!

A super card Faith, such a cute elephant and great design.
Pauline - Crafting with Cotnob
x

Oh, Faith! That is absolutely wonderful...both inside and out! Too CUTE! :o)

Oh my goodness! Your card is absolutely adorable! Love, love, love that cute little elephant! (And yes, things are a bit crazy right now, aren't they? We just have to be sensible, look out for each other in whatever way we can and I think we will be okay in the end!)

I'm so in awe of your creative process in making a card! This is a fabulous design, and just perfect for the occasion! What a darling little elephant that is!

Awwww, what a wonderful card. So very cute and a sweet sentiment. Love it inside and out.

I still don't get the toilet paper thing, as our shelves are bare too. What the heck?! What this has to do with toilet paper is beyond me. lol What a darling card Faith, you did such an amazing job on it! Your elephant is so cute, loving those trees too. How do you like the WRMK's Foil Pen? It looks amazing on your card! Love the inside as much as I love the outside. I'm sure your neighbor loved it too! Hugs, Brenda

Wow..what a treasure this card is. Adorable image and I love the inside as well. Very clever Faith...I love it. xx