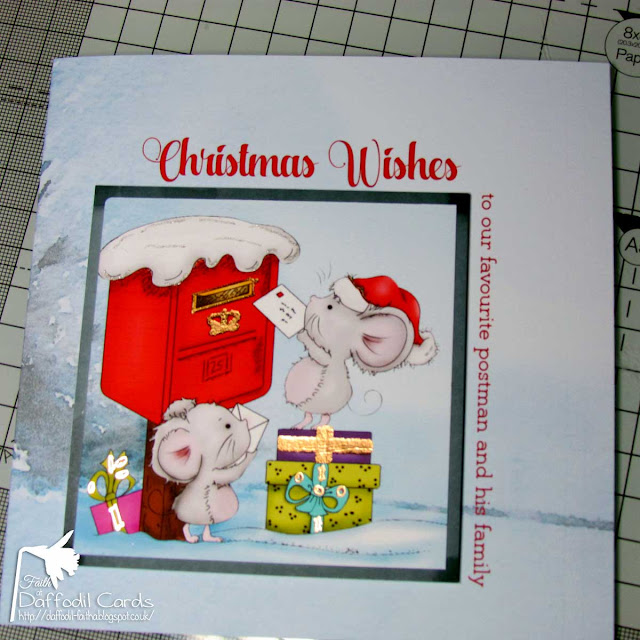 Brilliant, so pleased you sorted that out Faith 👍😂 Your card is soo cute 👏🏼👏🏼 Happy New Year to you 🥳🤗💕

Happy New Year to you Faith,and what a wonderful card, love the sweet image and fabulous design, great colouring and foiling too, Kate x x

A fun card, Faith. Sounds perfect for your postman and I'm sure he was delighted to receive it. xx

So cute Faith, I bet the Postman really appreciated it xx

Cute card! Those mice are adorable!

Oh, that stamp is so adorable, Faith, and I love your story about the foils! lol Gave me a great giggle for the day. I'm back from my Christmas travels and am trying to get caught up on all me favorite blogs. As usual after a long travel time, I simply do't have time to do individual comments on everything posted while I was gone but I am browsing the entire blog and all the posts so that I don't miss anything. You know, this one should really have been entered at 2 Crafty Critter Crazies or even at Jan's Digi Stamps. Check my blog for links to either one of them. :-D

Oh, Faith! That's just fabulous. It's such an adorable image, and the foil bits are fantastic. It's so fun to have a nice postman! I have one for parcels delivered to my door. He looks like Santa, and he loves to chat! lol :o)

Oh your card for your postman is darling! Love those adorable critters ~ I probably would have put a few arrows on the card pointing out the "crafing plaything" LOL

Your card is just adorable. Love the cute little mice. Thanks, for sharing your story.

A super card Faith, an adorable image - the touches of foil are fabulous.
Pauline - Crafting with Cotnob
x

Awe! Your little meeces are so sweet delivering their mail!! Love the fabulous papers and how you've put them on your design with the shinny packages! :) Thank you for sharing your creation for the 2 Crafty Critter Crazies challenge this month! HUGS, *Vicki* (DT)

I had a little chuckle whilst reading your post Faith....Such an adorable card and a very kind thing to do for your favourite postman x.