Hi Everyone, I have the most exciting new for me anyway, I have been a fan of of Paulette at Create with TLC for a number of years and you may have seen me taking part as Guest Designer recently in her blog hop. WELL - I am thrilled to say that I have had the chance to become one of the DT and I am over the moon.

My card today so happens to include the sentiment from Create with TLC, it is a Get Well card for a friend of mine who was on an away day, helping people with arthritis to get around (she's nearly 80 but quite active). She had a bad fall and was taken into the local hospital where she had an emergency operation to insert a new hip! her husband had to travel 200 miles and stay in a B&B until she could come home 10 days later, after succumbing to a chest infection after her operation.

Anyhow the card - you know when you say you have uninked stamps? well this is one of a few hundred (at least) of digital stamps I haven't used. It's by Anne Fenton, I have had it for 5 years, shame on me.  I thought it apt with the sentiment from Create with TLC and a note added from me! I hope the cheery colours in the DP's by Melo Vrijhof cheer her up and get her on the road to recovery. 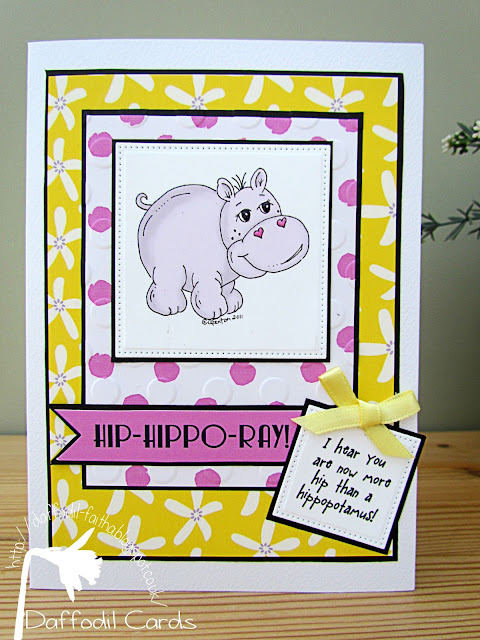 DP's by Melo Vrijhof at Pixelscrapper.
Posted by Faith A at Daffodil Cards at 08:00

Had a chuckle at the sentiment and what a vibrant, uplifting and colourful card. How unlucky was your friend? Big Congratulations on joining the team at create with TLC.x

This is wonderful! What a fun and very appropriate card for your friend. It's bound to bring a smile to her face!

Such a fun card Faith, a super image and lovely bright papers - your sentiment is perfect.
Pauline
x

Hi Faith, I just thought I would let you know that the Crafter's Companion Country Life CD is on Sale at the moment it's only £5 - http://www.crafterscompanion.co.uk/sale-c2160/cd-overstock-c7039/5-c8233
Pauline
x

Congratulations and well done on your new DT role Faith. This is such an uplifting card, it's bound to make you friend feel better and the sentiment couldn't be more appropriate !! xx

Congrats on the DT spot, and with cards like this, I understand why. This is really cute with a great sentiment too.

Congratulations on your DT assignment, and will be looking forward to your way with designing! Your friend sounds like a lady who would be a pleasure to know, and what a shame she had some misfortune while she was doing such kindness. This cute hippo is sure to bring a big smile and the cheery colors just have to brighten up her day. It's darling. TFS & Hugs

Many congrats on the DT place Faith,very well deserved too. This is such a cute card too,your poor friend will love it too. Hope she mends quickly now ☺ Viv xx

Hi Faith, your card is adorable. Congratulations on your new role with the DT. Wish you all the best!

Such an adorable card. Always great cards to make someone smile!

Such a cute card and well done Faith on being chosen to be on the DT. Well deserved x

First, this is as cute as can me. Happy image, and happy colors and all of it put a big smile on my face. Next, the thing I got is called PizScan by Cameo. I bought from Amazon for $13. It's not real new but new to ME....haha. You buy the mat, calibrate with your camera. Stsmp your images onto your paper. Take a pic of stamped images on the mat that you put the paper on. Cameo will now cut around the edges or you can leave a border. It's pretty accurate. It's about two steps but beats fuzzy cutting around some tricky images.

Sorry to hear about your friend. Sounds like she is in need of a cute card like this one to cheer her up. I love this card with the bright yellow and pink. The hippo is as cute as can be and so perfect to be pink.

Huge congratulations, and so very well deserved, Faith. You have made a stunning card. I think I might need that sentiment for my colleague, Ray, lol! LOVE it!

Too cute, Faith, and sure to make someone feel better by putting a smile on their face.

Totally adorable Faith! Love your wee hippo, and the colour palette you used is just so fun and cheery!! Hope you had a wonderful weekend my friend :)

Ouch! Your poor friend!! I always find it especially sad when one gets hurt while doing good deeds for others. I do hope she's doing much better now.

Your card is fabulous! It's bright and fun - and just perfect for a hip replacement!