A Scary story, but NOT Halloween!

If you haven't read the full story go HERE to read the start - don't spoil it by reading this first! You'll want to know why they were afraid.

continued from the last paragraph.

She was shocked to see it still there, it was different to what they had seen, but it WAS there, she ran to the kitchen and called her husband to tell him they hadn't imagined it!

As she was dragging him out into the garden he was saying "NO! it isn't true, there couldn't be anything there, it was a sleight of light nothing else". She kept hold of him as they went into the garden to see what she saw. His face was a sight to behold.

This time she was able to take the photo, so that, at least, they had some sort of proof of what had happened, before it was able to move across the sky, hopefully sooner rather than later, away from them.

scroll down to see what had them wondering! 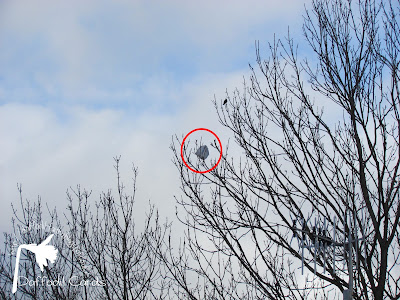 Hope you enjoyed the story, I enjoyed telling it. ROTFLMHO!

Here's some photos of the birds that visit our garden. Real ones!

AND some floral for you as well.

Hope you enjoyed your visit.

Posted by Faith A at Daffodil Cards at 15:00

Oh how fun and funny! I loved your story-telling. I often do that when a card I create inspires me to expand on its "backstory." Many times it's just a teaser and while I post "to be continued" I never get back to it. LOL Brava for finishing the story.
Regarding your question on my blog (http://patacakespages.blogspot.com), Crackerbox Palace only sells rubber stamps. When they sponsor a challenge, they send the DT a digital rendering of the stamp. I hope they sell both in the near future! Thank you for visiting my blog.

Great story.
You have taken some fantastic photos of the birds and flowers in your garden.

What a great story Faith, looks like some sort of strange bird to me...glad you found out in the end anyway ;) Viv xx

Oh my gosh, I can't believe it was a plastic bag!! I must say, I'm a little disappointed and relieved at the same time! tee hee. Love your bird photos, you have a gorgeous garden! hugs and happy weekend Faith!

Loved your story and what a great ending. Beautiful pictures of your garden and feathered friends. Thanks for sharing. xx

Oh that is a cute story. I also enjoyed the pretty floral card that was in the older post, with the wonderful fishtail banner & embossing. Loving to see all the birds that visit your feeders. See that you have titmice visit too, I think ours might look just a bit different. Don't think the breast is as yellow, but more creamy. Sparrows are probably the same though, and our pigeons are not so pretty. Still gobble up all the feed if you don't chase them away. I don't mind what they eat off the ground. Gorgeous bright spring flowers. TFS them & glad to see Spring is about there in your area. TFS & Hugs

Great story, my friend! I'm holding my sides and shaking with laughter. :-D