Hi Everyone, my #3 Brother was 76 this week and this is the card I sent him, he is a STAR. I call all 4 of my Brothers my Bruvva, I've lost one, but they are and were the BEST of men including Hubby of course. Oh! I have had the most loveliest of men in my life including my Dad and Son. nuff of that sloppy stuff :)

The card was cut with a file from Shirley's Cards you can get it Here it was so easy to cut, I cut the centre twice, once as the card and once on paper that I made in PS with a number overlay and coloured it navy, I also cut the text Bruvva and a 3 circles, then added them all to the card.  I added different cream card to the back of the front card, then glittered the stars. Quite simple, but easy for posting too. 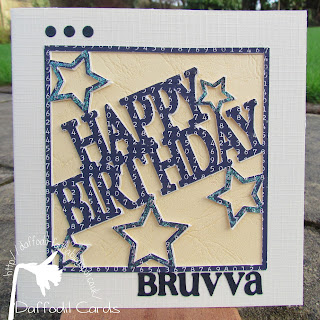 Aww . . . you can never have enough loveliness or "sloppy" stuff Faith.

Looks brilliant Faith, love the paper. I had forgotten about this template, story of my life !! Thanks for the plug xx

I love it!!
Awesome design and I love how you overlaid the paper! Genius. Smiles.xx

I think this is a fantastic masculine card, Faith! How lovely that your life has been blessed with such wonderful men. :-D

This is wonderful Faith! Love the blue against the soft background, and the pattern on the cut out sentiment is so perfect for a masculine card! hugs :)

A great card, love the papers you've used. I have been and downloaded it from Shirley - I have a few of hers, but yet to use, and I forget I have them. Out of sight on the PC out of mind!
You made me laugh about the ribbon - I didn't think I had that much either, and then I found some more. My plan is use this first and then refill!

This is an awesome card- Your brother will love it. Thanks for joining us at Crafty Gals Corner.
Amy-DT

A great card. I'm sure your brother will love it. Thank you so much for sharing with us at Ruby's Rainbow.
Hugs Helen P X

Fabulous card! Love the die cut and the number overlay. I'm sure your bruvva will treasure it. Thanks so much for playing along with our Anything Goes challenge at The Male Room!

Ooh that is fabulous. I'm sure that cut file will get lots of use! Thanks for joining in the fun with the Fab 'n' Funky girls for our first challenge of the New Year. We're so glad you did. Come back again soon! Big hugs, Wends x Fab 'n' Funky DT

A great card - thanks for joining us at Ruby's Rainbow.