One of the son's of a girl in work has his 16th birthday next week, he is a member of the "Boys Aloud" group, that was in Britain's got Talent show and came 3rd, they are going on to greater things.  You can imagine the excitement when she came into work and said they were to appear on the show, of course we followed their progress from then on.

Anyway, onto the card.  She wanted the card to include a piano and drums as he plays these instruments, also the fact he is in the choir, and a lottery ticket, because he keeps saying "on my birthday I'll buy a lottery ticket and with my winnings ......" nothing short of a positive attitude ay?

As you can see lots of digi work in this.  I downloaded a piano keyboard, Union flag, the Only Boys Aloud logo that she wanted on, a drummer that I saw on the web that was drawn by Philip Martin, the scroll is a Panofix action for PS. and a lottery ticket.  I distorted the keyboard duplicated the flags to make bunting and then enlarged one to place behind the choir from a free colouring page, that I printed off, I scanned it in and then painted in PS. it was perfect for the boys.  His name and age are Jokerman font and I used a gradient to match the colours of the flag.  I just hope he likes it.  I think that's all I need to include in this. 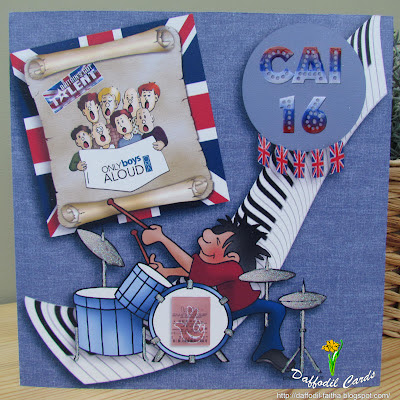