Hi Everyone, an easy card from me today, all I had to do was print and cut it out (with a scissors!)

My eldest Brother is 80 today, his first job was a Fireman on the Steam Engines of the 1950's, the 2 younger than him followed him onto the GWR Railways. The 3 of them have been avid train enthusiasts ever since, it was so funny when they got together and played vinyl records of trains going through tunnels, with shouts of  "listen to it, he's firing up now" to get through the tunnel.
They were talking of the Severn Tunnel. It is 4 miles 624 yd (7,008 m) long, although only 2 1⁄4 miles (3.62 km) of the tunnel are under the River Severn. For well over 100 years it was the longest mainline railway tunnel within the UK, this was on their route on each journey. Go HERE for a fascinating story of how it was built etc.

Anyhow, this is a Great Western Railway engine, one that reminds me of those "halcyon" days of Steam and of my Brothers stories about it. The envelope was also a printed and cut. Oh! yes they STILL visit any Steam Engine Museum wherever they are in the world and of course the UK. Eldest went to visit somewhere recently and saw the ORIGINAL Engine he started work on, he was thrilled to be allowed onto the footplate and to drive it a short distance. Of course his birthday card, an easel shape, for his special day HAD to be of a Steam Engine! layered and decoupaged.

EDIT He told me after having the card that he had worked on this particular engine, how's that for Luck! 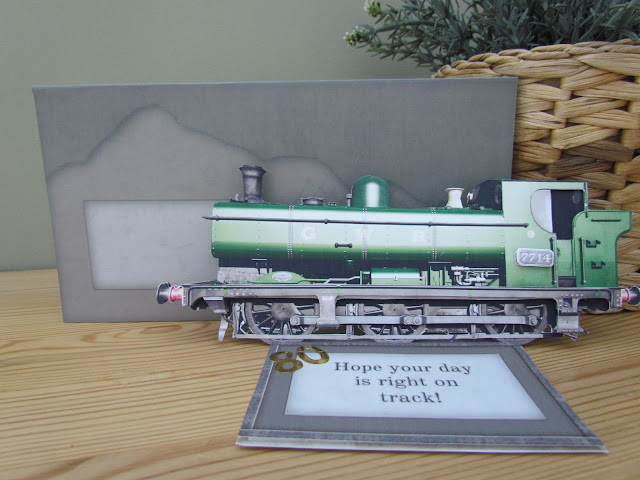 Steam Engine by Card Buddy
Posted by Faith A at Daffodil Cards at 08:00

Another fab card Faith, no wonder your brother loved it...just perfect for him, clever you ;) Viv xx

Oh I love steam trains, too! Do you remember how we had to shut the windows when the train went in a tunnel because of 'smuts'?

Your card is perfect, and how exciting that your brother actually worked on that engine!!

This is brilliant Faith, such a fabulous design - how wonderful that your Brother had actually worked on the engine that you chose.
Pauline
x

One word Faith - FABULOUS! What a great idea - love the train and the background and the sentiment. Just so fun!

Love your card! I have to make these sorts of cards as well. My DH still works on steam engines as a volunteer and I look after the visitors garden. DH is getting 6201 (Princess Elizabeth) ready for the rails this summer. She's LMS though so your brothers wouldn't have seen her working.

Wow! What a fabulous card, Faith! It's like it was made for your brother! haha
Have a great weekend! :o)

What a fantastic card Faith no wonder your brother loved it especially as it's so personal to him. The story of the tunnel is fascinating and what an engineering feat bearing in mind the limited equipment available in those days xx

SUPER card and perfect for the recipient . . . even MORE perfect that you realised!

Fabulous card Faith. I love the fancy layout design and the train theme is such a cool idea! Love the sentiment, how perfect is that! hugs :)

Your card is fabulous honey and your story wonderful!

I just know how perfect that card was and how happy your brother would have been to receive it. Big smiles.

I have a love of all things steam too, though I'm not sure where I get that from. Tee hee.xx

Incredible, Faith! How wonderful that it's one on which he actually worked. :-D

This is awesome and so perfect for your brother! The others are going to want one now.

I adore this card, what an amazing image, it is stunning. I bet your brother loved the card.

Perfect card for your brother and how amazing one that he worked on - he is going to treasure that.