A bit of a free day today being a Sunday.  I had a request to make a card for a friend's son again this year, it seems he has kept the last few years cards as he thinks their great! So of course I HAD to make him one this year.  All his cards are Chelsea football club theme as he is an avid supporter, the rest of his siblings and parents are Man Untd supporters, so he is the only one out of 7.  As he is getting older it's getting  a bit more difficult, from the child into the man.  I had a look on the web for some ideas and saw a card HERE which sent me to HERE for the SVG file, she has some amazing SVG's as freebies.  I had already started making the inside with football paper I made, by copying a football and making a pattern fill in PS. I then made 2 circles out of the football page and merged them to make one shape a top and bottom, added a white circle to the bottom half and added a verse. then printed it out. As the size was A4, it was then easy to make a shape the same size in Fairycuts, which I cut out of white card and pasted the printed inside to it.  I folded the top in half to make an easel card.  It was then on to the football, I cut a circle from the SVG onto white card and the shaped out of black card, I was thrilled with the result, it looks so good. Thank you Beth for the file.  I then added it to the folded part of the card, then added the 15 and his name made in Fairycuts again, to the front of the card, I stickled it (of course) then I added the digi stamp by Kenny Keirnen HERE coloured in Chelsea's colours in PS, printed and cut out  and added to the card raised on 3d stickers.  I printed and raised a T shirt copied from the web, as a stop on the card then cut and added a small football as well. 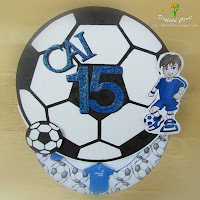 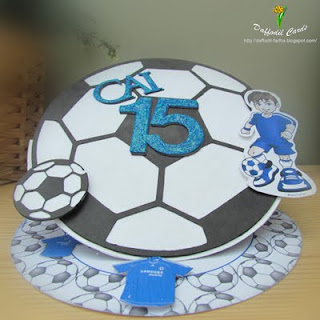 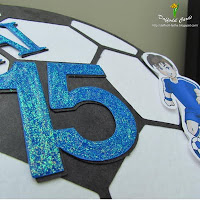 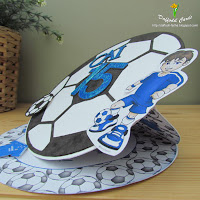 Posted by Faith A at Daffodil Cards at 13:02

Great card! I love the idea I always get stuck for ideas for male cards but this is genius!

Brilliant card Faith, such a novel idea - may pinch it one day lol
Beryl x

What an amazing card! I love all the details and the creativity. He will love it. Thanks for joining us at Send a Smile 4 Kids, good luck and hope you'll join us again

Sure we'll include Cricut:) What an imaginative card for a boy who loves soccor! Love it! Thanks for sharing it with us at Send a Smile 4 Kids and come back soon!

What a perfect card Faith; another one he'll love! x

such a fun card- I'll have to remember this for my son' soccer party! Thanks for joining in the challenge at 2 Sisters! =)Tiffany

Thank you for joining us at Paper Creators Crafts.

Oh My Land! This is just adorable! Funny, I'm from the US and this isn't football to us. He will totally love this card and it is perfect for any age! This one will be another keeper! Thanks so much for sharing with us over at Send A Smile 4 Kids challenge. Good luck and I hope you will come back and play again with us!
Hugs, Sarah

What a fun card, love it! Thanks for joining in at Ellephantastic. Jill

What a wonderful easel card, I just love all your details with all the soccer balls :) Thanks for joining us this week @ Send A Smile 4 Kids, hope to see you again :)

Love your football card and it makes a great easel card! x

Love the shape of this easel card.
Thank you for joining us at Paper Creators crafts

Really lovely creation. Thank you for playing along with our 'Add some layers' challenge.
Good luck
hugs x

This is a fantastic card for a boy, love how you put it together, looks great. Thanks for playing with us at SAS4Kids, good luck,blessings Hilde

This is a great sports card. I love how you used the jerseys on the inside. I know he will add this one to his collection that is for sure. Great boy card. I love it

Wow what a super card and perfect for anyone footy mad ! Very bold design great job once again.