David is the Patron Saint of Wales

Here I am in 1981 in my Welsh National Costume

I haven't changed a bit, ahem! 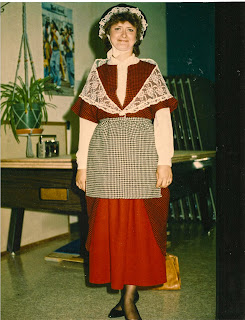 as  a 6 - 11 year old child in school on St David's Day there was  a concert about Wales and singing great old Welsh folk songs, I loved the special morning in school.
We also had a half day, my mother used to take me into town dressed up in my National costume. I was so proud, the boys in school didn't dress up, but sported a VERY large Leek. The Leak and the Daffodil are our National emblems. That's why my blog is named as it is.
Here is a much loved song and a little about the love song-
Myfanwy is a popular Welsh song that is thought to derive inspiration from the story of Myfanwy of Dina Bran. It was composed by Joseph Parry in 1875 with lyrics by Richard Davies (1833 – 1877), who used as his pen name Mynyddog.
Here is a link to a Male Voice Choir singing it. Myfanwy It is pronounced Muh-vahn-wee. It also has pictures of the old Valleys in the coal mining era of when I was growing up. So much has changed. The Valleys are now green instead of the black coal and dust that made them.
I hope you don't mind me being indulgent in taking pride of my heritage, even though I have English and Irish blood in me too, no Scots, but I do have a Nephew in Law who is, does that count? 😄
My 2 DT posts are below.
I hope you enjoy them. I certainly did making them.
Have a GREAT day.

Posted by Faith A at Daffodil Cards at 08:15

Email ThisBlogThis!Share to TwitterShare to FacebookShare to Pinterest
Labels: Welsh

Happy St Davids day Faith, you look wonderful in your full rig out, nice memories. I love to hear a Welsh choir, what beautiful voices, so nice of you to share.xx

What a fun photo from the past - and thanks for sharing your heritage with us! I love hearing stories like this and you show your pride in where you come from and that's fabulous!

Thanks for sharing the video Faith. Loved it!

What a fun time to remember. I had to go watch the video you linked to. I love looking at history. It's nice that it has returned to green valleys. [Bunny]

Happy St. David's Day Faith x. I so loved the memories of my childhood too and always enjoyed this day at school....dressing up, the songs, verses etc and having half a day off! Wonderful song too and always brings back the 'Hiraeth' in me x. Thanks Faith x.

Happy St.Davids Day and quite right that you are proud of your heritage.LOve the photo of you in National Costume
Carol x

Lovely photo of you Faith, and you should be proud of your heritage, it's a lovely country, Kate x

Happy St David's Day! Great photo of you and thanks for the link to Welsh song. Being half Welsh I always get goosebumps listening to Welsh Male Voice choirs. My grandfather sang for many years in the Blaenavon Male Voice choir and had a wonderful voice. He used to tell me that the Beatles didn't know how to sing properly. lol! I remember seeing the many coal tips in the Valleys when I was a child, so pleased that they are gone now. xx

Happy St. David's Day Faith. It was wonderful to see the pictures and hear the beautiful voices. You look great in your national costume. Pat K. xx

Happy belated St. David's Day Faith! I love seeing you all dressed up like that and I love learning more about your ways of life. The song is fun too, not sure about wearing a leek, but guess you didn't have to! lol So fun and thanks for taking pride in your heritage!!! Hugs, Brenda

This post has brought back some happy memories..... I wanted to call my eldest daughter Myfanwy..... I was talked out of it by my then in-laws, even though they had the Welsh roots!!!
Thanks for the lovely post.

Happy belated St. David’s Day! A wonderful photo of you in the costume! And, thank you for sharing the video of the beautiful music!

i just leave reading these posts, faith! it is so fun to learn about your heritage. lots of people don't know their heritage now days. i do! my grandfather was from king's lynn in england.

I'm late to the party . . . But am sending belated Happy St David's Day wishes your way.

Look at you in your costume Faith! The song is so beautiful and sung by the male voice choir it brings a tear to the eye. Looking at the photos made me so sad too - left to ourselves ordinary human beings wouldn't destroy our landscapes in that way. Vicky x

Fascinating info, Faith, thank you for sharing a part of you here! You look so cute, by the way! ;)

Belated Happy St David's day! Great photo. I still have a welsh apron from when I was a child. My grandmother insisted on buying me the whole outfit when I was about 6!

Love the photo & so great to be proud of your heritage! I am around 7% Welch according to my ancestry DNA results!

I really enjoyed that, love learning about other cultures and history. You have a wonderful heritage and should be proud of it. xoxo

You are adorable. I love the history lesson.

I think the Welsh heritage is fascinating, love your photo of you in the national dress.