Hi Everyone, I have been so bad with blogging, but I have an excuse -

I am writing up and trying to decipher my Grandfathers poetry, over 200 and all handwritten before 1909 up to 1956. I have been invited, quite by chance, to speak about him and his poetry to a couple of local groups. I'm thrilled about it, as his writings deserve to be heard.

An ordinary working man, he was born in July 1870 and died on Jan 1st 1957. He left school at 10 years of age and went down the mines, he also worked in quarries, when laid off from the mines. He wrote poetry, did water colouring, had beautiful handwriting and was quite clever with such short schooling. He wrote about the times he was in, the suffering of the people and the beauty around him.

I've done a scrapbook page of one of his poems. I hope you like it, it was written in December 1916 during the First World War. The picture is of him and my Grandmother.

just a little explanation of a couple of words, in case you don't understand -
9 pence is the old money £sd, pounds, shillings and pence
to reckon out the taters - distribute potatoes
bacco - tobacco

Anyhow after all that here is the poem 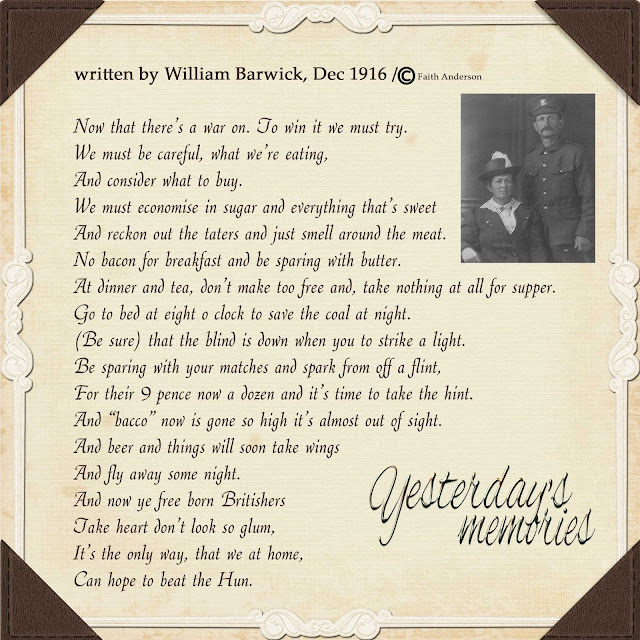 That's beautiful Faith. Thanks for sharing. I remember that my Gran told me that she got fined once during the Second World War when she forgot to close a little window blind in the larder and the light shone through! What a wonderful project to work on - such memories and an education to boot!

This is fabulous Faith, it really takes me back - I am old enough to remember the 'old money' and my Dad always grew 'taters' and smoked what he called 'baccy' - thank you for the trip down memory lane.
Pauline - Crafting with Cotnob
x

Beautiful thanks for sharing!!!

What a wonderful thing for you to do Faith, I love the poem, it sounds like he was a very special man and this is a lovely way to remember him. You are not as bad a blogger as I am these days, I’m struggling for ideas at the moment but thank for your comment on my last post xx

What a treasure you have with your grandfather's poetry, and you've turned his writings into cherished memories for those who follow. I just love things like this - thanks for sharing :)

Faith, that is so wonderful, that you have all these poems.
I am sure you make it into a beautiful book with all kinds of pictures to go with it and yes that takes a lot of time, but worth it!
This is a beautiful poem and thanks for sharing.

Wow Faith, this layout of your grandfather's poem is amazing! I love that you included a photo of him and your grandmother. I can't imagine knowing about my grandparents like this must less have poems from a grandfather. I didn't know my father very well, just when he kidnapped me and never knew his parents at all. His mother was an Indian is all I knew. Didn't know my mother's parents either, just a bit of my grandmother-which was I knew who she was. So to have this legacy is so precious my friend and one that I wish I had. I know you will do great speaking about your grandfather's poetry and I'm glad his poems are getting some attention they deserve! People have no clue of how hard the times were then. I know my kids don't and would never survive if they had to go through it. They are all to spoiled by everything that can be had of today. So I'm glad that his poems are all the more precious! Hugs, Brenda

Hello lovely lady hope all is well with you and yours. Your layout is fantastic and a great tribute to your grandfather his words brought a tear to my eye but loved the humour in them,now I know who you got all your talents from .
How exciting being asked to read his poetry , I would to hear more, did he ever publish a book ?

So enjoyed reading the poem Faith. What wonderful memories for you to treasure and also as reminder how times where so hard. I am amazed he left school at ten years old....So unthinkable today x. Thank you for sharing this with us and good luck with the talk, you must be so proud? x.

I love the poem, Faith. Lovely memories. Good luck with the talk.
And be proud of your grandfather. Hugs, my friend.

What a wonderful poem Faith!Yes you are right they so deserve to be heard too.Amazing memories for you all aren't they ;) Viv xx

I beautiful poem and great pic of your Grandparents-well done on been asked to speak about him and his poetry and sounds like you inherited your craft side from him too.I remember the old money and hubby still smokes baccy in his pipe--we also still refer to tatties too!!!
Carol x

I know I've been absent for a while now and that will continue for a while longer, but I had to come by and leave a comment on this beautiful tribute to your Grandpa. I love the poem, love the layout, and love that you shared this with all of us! He truly had a talent as a wordsmith.
Bear with me in my continuing absence, Faith. Once moved and settled, I'll be back to my usual routine. :-D

Your grandpa was a talented poet, and it's wonderful that you are paying tribute to his talent. Once completed, it's a book I'd like to read! Thanks for sharing.

That is a fascinating poem! How great to have them for keepsakes. Wonderful collage!

Beautifully written and perfect for this challenge, Thanks so much for playing