Hi Everyone, hope all your preparations are well under way or finished, I am thankfully, except food shopping which I think I will leave until Sunday, probably when most will be doing it ugh! I'm working Monday and Tuesday so can't do it then, so Saturday or Sunday it is.  Only a couple of cards left of people I forgot!!!! so bad of me.

Anyway, a card for you today, you know I am a fan of Elizabeth Dulemba, well she is asking for Christmas cards for her gallery, so thought I would oblige.  Here is my contribution.  I chose her hat and mittens, seeing as a few friends "over the pond" have deep snow and we are getting a bit colder too.

I have decoupaged the image and used tiny eyes to accentuate the eyes on the mittens,  I paper pieced it all from a digi kit "Jovie" by Gina Cabrera. I used Atomic Cupcake's chalk action in PS to edge the snowflake paper, then cut a few of the image to get layers. I added buttons from the kit too, but added shadows to them rather than cut them out. A real cheery card as is the message, hope old neighbours will enjoy it. 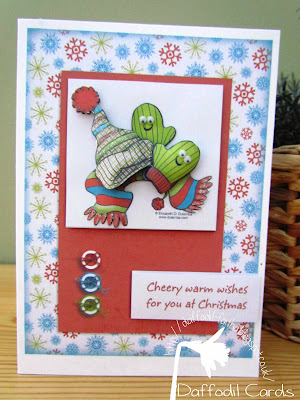 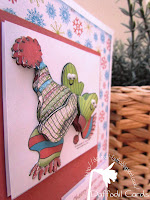 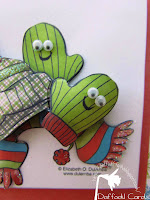 Such a fun card Faith...love this image and the decoupage looks great. I'm in awe of your talent with PS. hugs, Pat K x

Oooooh, loving this hun - or should that be gloving this?! I need a lie down. Brilliant card sweetie. Huggles xx

What a happy card Faith and I love the decoupaged images.

Hi Faith . . . I love a bit of decoupage and you've made a lovely card here.

Merry Christmas to you and yours.

I love those cute little mitten characters Faith! Of course old neighbours will love it (unless you call them old neighbours that is!) Have a lovely Christmas, Vicky x

I LOVE the dimension of this card, Faith! And those little eyes make it even better! Happy Christmas to you!

What a fun card, love those little eyes...hehe...Great paper piecing and love all the bright colours including that fab DP paper at the back. Hugs x V

So stinkin cute! I don't know what I love better... the piecing or the googly eyes :-) Totally adorable!!!

What a beautiful card, great colouring and perfect for our Anything Goes challenge. Thanks for joining us at Bearly Mine and hope to see you again soon.

Faith - You've done it again! This is so adorable! I'm going to feature your card in my January 7, 2014 Coloring Page Tuesday newsletter. If your followers aren't subscribed to see your creation featured, they can subscribe at http://dulemba.com/index_ColoringPages.html . I hope you'll keep sharing winter images - I love featuring them! :) e