I have made this card with images from TLC http://createwithtlc-createwithtlc.blogspot.com/ a friend of ours is 70 next week and I made this for him as he used to go fishing.  The "water" paper is from PC Hugbugs, I've had it for years, then added the school of fish and used Graduation in PS to colour them, I did the same with the big fish, then printed it on acetate and added it the card so it looked like it was swimming out from the card, at least that was what I thought lol.  I added another printed on acetate to the left side glued straight on to the card.  The sentment is also from TLC, the full saying being O Fish ally Retired, but I took artistic licence to say O Fish ally 70!  The font is The Blue Cabin.  I added 3D gloss to the 70 also graduated in PS. 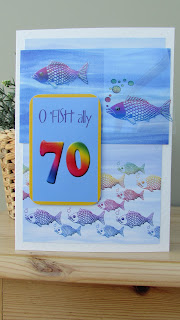 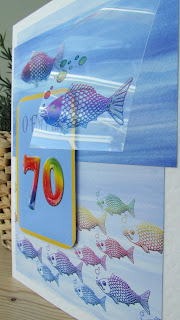 Faith this is stunning, those fishes are awesome, such gorgeous colours too. I bet your friend ill love this.

PERFECT! So hard to know what to make for a 70th birthday, but you've cracked it.