Hi Everyone,  my card today is one I made for my GNephew, who did really well in his exams. I had this image as a freebie and decided to use it for his card, you know "wise owl".

Anyhow, this image for made for the Foil Quill in mind, so that is what I used.

I had the Cameo to draw the image with the gold foil and at the same time draw the congratulations sentiment too. Then, had the Silhouette pen to outline the foiled text. The Cameo cut the frame of the owl at the same time as the outer gold layer card. I copied the size of  the centre of the owls eyes and made a circle to add to the owls eyes out of the gold card. I added it to the red card flat, as it had to be posted. The black and gold paper is glued to the base card. 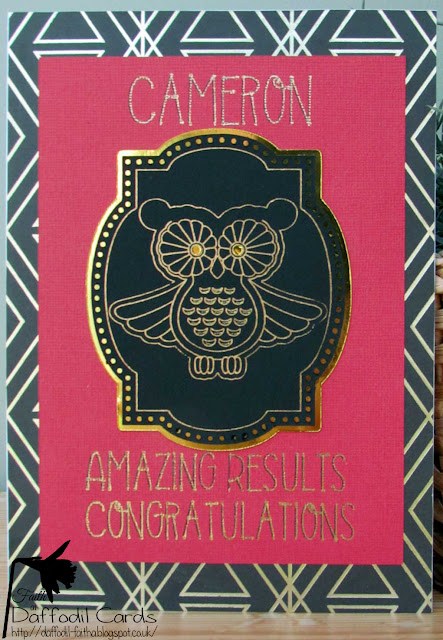 I had to take the sunset on 21st August, I always like sunsets, they are so beautiful and as our bungalow faces West we are lucky to see them from our home over the mountain.
This was the first on I took 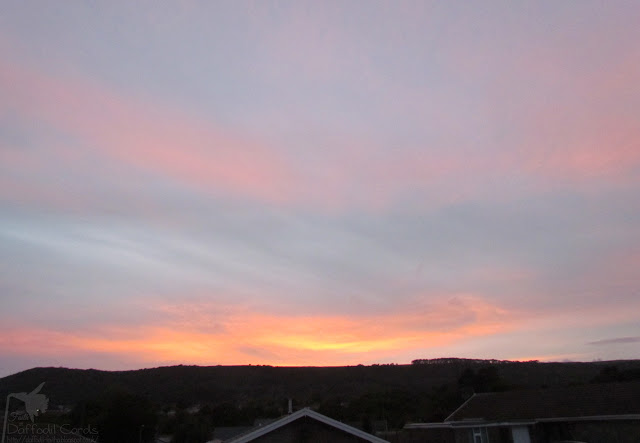 then the colour intensified and spread a little further, so a closeup was called for! 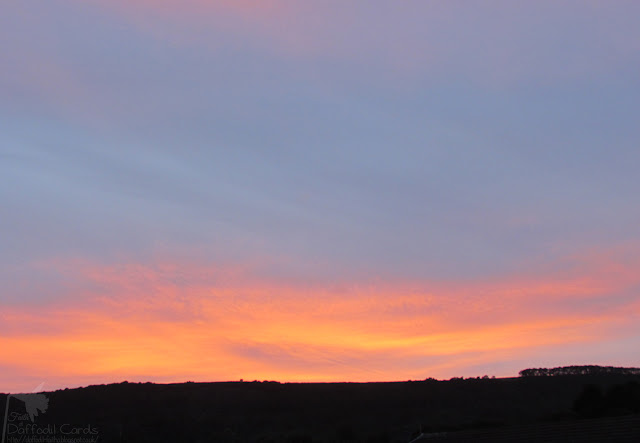 What a stunning card. Great work on the Cameo Faith and your card is unique and personal and congratulations to Cameron x
Thanks for sharing the photos of the glorious sunset. We live on the West coast of Scotland and get some stunners too x

What a gorgeous card!! I love the elegant design with the gold foil!! The sunset photos are so beautiful!! Have a great weekend!! Big hugs :)

What a fun personalized owl card! Love the touches of gold, and love those beautiful sunsets too!

A beautiful card. I love the gold, it gives it such an elegant look.
The sunset is sensational. Love it.

Beautiful personalised card, Faith, I love the cute owl. Thanks for sharing the photos of the wonderful sunset. xx

Oh, Faith what a great card and ongratulations for the great exam results by Cameron.
Loving your sky pIctures. I also noticed this tonight while driving home.

Wow such a stunning card great job as always!!!

The sunset photos are just amazing! What a great card for your nephew--love the foiling! PS--you most certainly could make the MFT Camp cards & the overlapping inlaid die cuts was really fun to do!

A lovely idea to celebrate Cameron's results with a wise owl Faith and the black and gold you used is so effective. Congratulations to your lad! x

The sunset photos are gorgeous. There's something so restful about a sunset :)

This is a gorgeous card, Faith! I love the color choices you made and the owl image is adorable!! I always associate owls with wisdom and education.
Your sunsets are beautiful!! My home faces the west too and I get some awesome sunsets. Our bedroom is on the east side, so we get wonderful sunrises too above the skyline. You have to take time to appreciate the beauty of nature!!
Hugs!
Darcy

that page is so totally amazing...I just love it!!! So happy and just a delight to stare at...your card is amazing as well.
xx Karen

I adore your golden owl, Faith! My daughter collects owls - figurines, prints, photos, and of course, cards, since I make them for her. :-D I'll have to keep in mind doing owls in gold.
Gorgeous sunset photos!

Wow, Faith! That is a real stunner of a card! I love the foiling on this one. I bet he really loved it too!
Beautiful sunset photos too! Thanks for sharing! :o)

A beautiful card. That owl is gorgeous. Your photos are fab - you can't beat a stunning sunset!