Hi Everyone, I though I would give you an update of my Son's health scare before showing you my card of today. The update is, he was given 100mg tablets to be given twice a day in February, he has control of his medicines and after another less severe incident on Thursday we spoke about them as his blood test in hospital had shown a high raised level. It seems he has been given 200mg by the Pharmacy and instructions 1 twice a day, he hadn't realised and so has been taking a double dose, for how long we don't know. The Pharmacy hadn't informed us of the change, I rang the GP and he arranged for my son to have a blood test before taking any more of the tablets. He still isn't that well, but at least we know the reason, hopefully. The lesson learned, ALWAYS read the dosage and instructions on your medicines and don't assume you are having the same as always.

On to my card for today. I wanted a 50th birthday card for a friend, it had to have a cat on it. I came up with this. As it is lilac season, (ours are still in bloom - just!) I used paper and lilacs from a digi kit and made a corner from them and other elements in the kit. The cat is one I had in a blog train in 2013, I've never used it, it is a perfect match methinks!.

I designed and laid out the the different elements in Photoshop using Garamond Italic font that, I thought, matched the cat's tail. I altered the colour of the cat just a shade or two to match the paper. I printed the front out and saved the corner layout and the cat with an extra head! as a PNG file and sent it to my Silhouette, have I told you I LOVE the Print and Cut feature. I then did the inside to match the outside. The recipient has an aversion / phobia to glitter so I couldn't add any, but I think the colours don't really need any. Quite simple, but I love those lilacs and the cat. 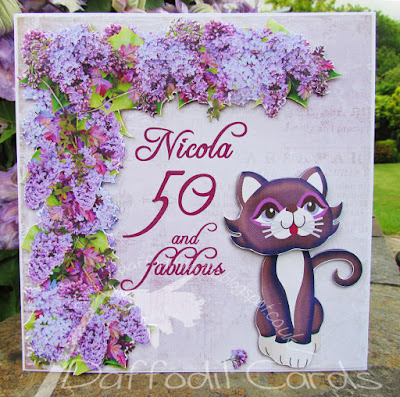 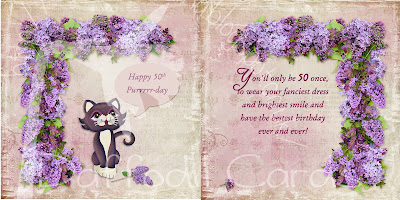 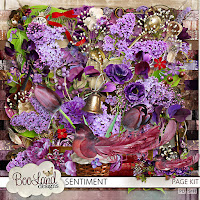 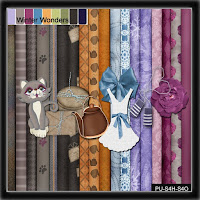 Posted by Faith A at Daffodil Cards at 18:50

Really love this one Faith, my favourite colour and you know I have a soft spot for cats, this one is so cute. It must be a relief to have found out what has been making your son so unwell - hope the effects wear off soon and he starts to feel better. xx

Gosh hun, that is a scare, for you both. I hope he continues to recover well. Purrrrfect card, adorable combi with the kitty and the flowers, so pretty. Hugs xx

Gosh - that's a scary story! Hope he recovers soon. Your card is just perfect for a cat lady! With all those gorgeous lilac blooms - beautiful in and out!

Beautiful - it even makes me like cats a WEE bit more! x

Gorgeous! The card isn't missing anything ...you didn't need the glitter! Your friend will love it I'm sure...I sure do! I'm so sorry about your son's Medes. That is terrible. You also need to. Are sure it it the right mess. I had a friend that realize he got the wrong pills when he was refilling. The pharmacist apologized but that would had been little good if something bad had happened. I'm so glad the err was caught and maybe now he will start feeling better!

I completely agree Faith, this doesn't need any glitter at all...it sings all on it's own! Just stunning! Love how you arranged the flowers, like a scene from Desperate Housewives. Just beautiful. hugs :)

Sorry to hear your Son has been having difficulty Faith but good to hear things are getting sorted...quite a scare and good lesson for us all to read the labels. Beautiful card...love the colour and lovely lilacs with that cute kitty. hugs, Pat K x

I love that darling little cat, Faith! Fabulous color combo, but then, I do love anything in the purple 'family.'.

I love lilacs and they don't grow well here in NC. There are lots of them in Vermont where I grew up. And this kitty is very chic! I'm sure your friend loves this card! Glad your son is doing better. What a scare!