Hi Everyone, Thanks for sticking with me.

My son is home and doing OK.

My computer is near enough back to normal. I had to reinstall my 1500 fonts, reminder to self, delete a few! A download of a new diary, which thankfully my son found on the web. That now has all my birthdays in it, that come up a month before hand, on my screen, also appointments and a few other things that I have managed to remember or had letters about. What a relief to get it back. Why I hear you say don't you write it in a dairy? I supppose because I have had this on my screen and it's the way I have worked for years.

A couple of programs have been either downloaded or adjusted to where I know their position in my files and drives. I have a new browser I am getting used to - sort of.  A few other things have been done. The SSD drive is working faster for me and my 'puter starts up so much faster. It will now do me another couple of years, I have been told, before I need a new one. Happy face.

I have a card for you also, our neighbour had her birthday in the middle of everything, me thinking I had plenty of time hadn't done one. She had sent me a lovely one with details about March, so it gave me the idea to do similar, but very different, if you know what I mean? A rush card which had to be given the next day, so the photos were taken at night, the photo quality and colours are so different to how it actually looked, but, I hope you get the idea.

Anyhow, I had seen a card on the web with March on the front, so cased the words. I printed the front from Photoshop then die cut with a stitched die. The daffodils and small flowers were die cut and added to the front of the card. I then added clear sparkle pen to the inside of the daffodils and gold gel pen to the white flower centres. She said she liked it, so I'm relieved. 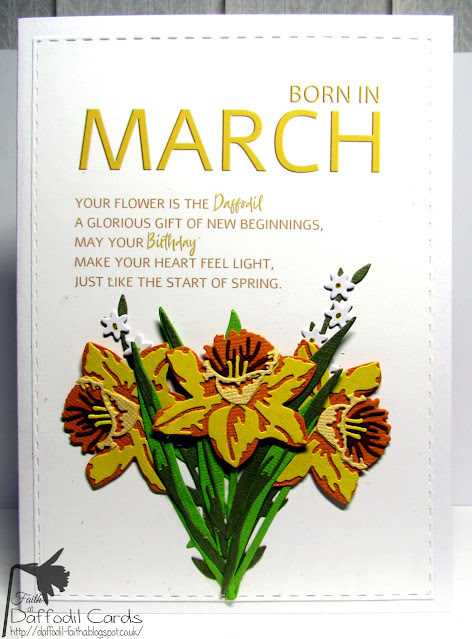 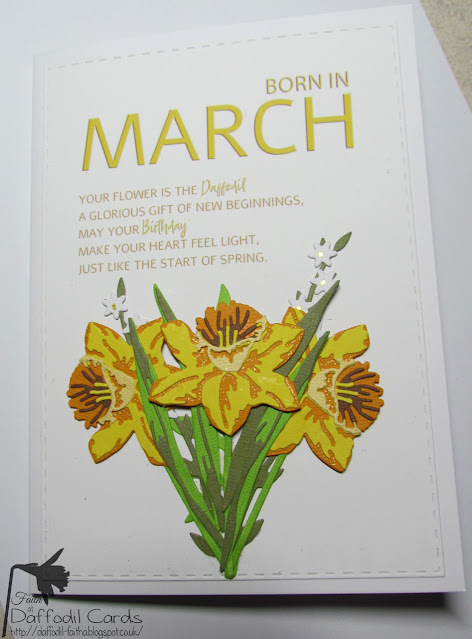 What a thoughtful and beautiful card Faith. The daffodils look amazing x. I am so glad your computer problems are nearly there and extra glad that your son is home and on the mend x.

A beautiful spring card Faith, lovely daffodils.
I'm so pleased to hear your son is back home and that your computer is nearly back to normal.
Pauline - Crafting with Cotnob
x

Beautiful card Faith, love the Daffs, so pretty.
Glad your all back up and running again.xx

Glad to hear things are getting back to normal! This card is gorgeous with the perfect sentiment too!

Gorgeous card and love the beautiful daffodils and love the details about March.Talk about forgetting things last week I was looking for something put away safely and promptly lost and founf someones Christmas card I had forgotten to give them -wouldn't mind we see them almost every week too-senior moment? too many of those lately.Glad to hear your son is home and doing well too.
Carol x

Wow, Faith! That is just gorgeous! Spring is just jumping off the card!

Hello Faith, so pleased that your Son is home again and that he could help you with your computer.
Your card is so beautiful, I love the daffodils and you've coloured them beautifully, a lovely verse for a March Birthday too, Kate x

So very beautiful. This is your favorite time of the year.

what a lovely card for your neighbor, faith! if you hadn't said anything i would have never known that you created it in a rush. it looks perfect! glad to hear that your son is doing better and you are getting your computer sorted out!

Beautiful card Faith, the words are lovely. Spring is one of my favourite times of the year. Pleased you have your computer sorted. I too probably have too many fonts and I use Google Calendar as my diary. I love how you can set reminders and also I can access it from wherever I am. Hope your son keeps well and I have finally got round to doing a new freebie for my much neglected blog which I will post today. Take care xx

I've missed a lot and I apologize - I guess life just gets in the way sometimes. I'm so sorry about your computer woes but even sorrier that your son had to be hospitalized, but hopefully he's coming along much better by now. Every now and then when I shut my pc off, when I reboot it gives me a big blue screen to install Win11 and I cringe at the thought, because I have no one here who can help me if something goes wrong. My hubby doesn't touch computers and has no desire to learn. I'm glad you had folks around to help you sort things out and I hope things soon return to a sense of order. The card is beautiful with your trademark flowers and I love the colors and CAS design! Again, happy belated birthday wishes and I send healing hugs for your son's speedy recovery too! Take care!

Happy to hear that your computer troubles have improved for ya. Your card is so lovely and thoughtful for a March birthday! It's full of spring and I can't wait to see my daffodils bloom here. I hope that you're son is doing well and that he has a speedy recovery! Take care!!

Oh dear. I do hate having to get to grips with a new computer. I had a much newer one a few months ao but I often wish I could do something 'the way I used to'. But I am gettting there.
The daffodil card is lovely. It all came together very well. I thought you might have done the daffodils on a silhouette machine but I see they were die cut. I am glad she liked it. Kate x

Hi Faith, so happy to hear your son is home and better and so is your computer. Your card is amazing! Altenew's layer stamps are so pretty but I just suck at it the 2 sets I bought at first, I end up leaving layers out because mine do not line up. I'm sure the dies would be the same wqay but what did I do but bought a couple of Tim Holtz colorizer flower dies, lol. Anyway, yours looks perfect! XOXO

Phew! Glad things are getting sorted on the computer front and it’s all looking more familiar. Pleased to hear that your son is doing well.

I’m caught up on your posts now!

Love this beautiful March card for your neighbour. It’s gorgeous.

Hi,So glad your son is home and that you are up and running again on the computer.Your card is so pretty.I Love Daffodils.xx

Oh this is beautiful Faith. I love daffodils and that sentiment is perfect. Good to hear things are back to normal and that your Son is home. Take care. xx

Thank goodness your son is home now and doing okay. And it sounds as if things are being sorted out a bit with the computer too. Your card is a real stunner and I'm amazed that you were able to make this when everything was at sixes and sevens. I love the die cut sentiment and that fabulous bouquet. Your neighbour must have been over the moon with it! Vicky x

Glad to hear your son is home and your computer woes are sorting themselves out with a little help from your brother. I'm sure you will master all of your new programs in record time anyone who can use photoshop like you do in my eyes is a genius.

Your card is gorgeous and love the words and those pretty die cut daffs, I do hope that things get easier for you sooner than later.

Beautiful Daffodils Faith, and I'm glad things are looking up~

Wow!! Those flowers are beautiful!

Glad things are better with the computer. Your card is absolutely beautiful & so special!

Pleased your computer is sorted. I have to admit to loving tech but worry about things getting lost so still use a lot of paper for lists, diaries etc.
This is a beautiful and unusual card - a great idea.

I am praying my computer lasts me a few more years, but it is considered a dinosaur, but to me it isn't. Not looking forward to having to get a new one that is for sure! Glad your son was able to help you with some things with it. Your card is gorgeous and so unique! I love it and love those daffodil's. A cool die to have, especially for you! I bet your neighbor loved her card! Hugs, Brenda