http://qkrstampede.blogspot.com/
We will select two winners each of the weeks
1 using QKR Stampede  or Eureka Stamps image
and 1 using any image!
Anything Goes every 1st & 15th of the month
Seeing as it's nearly Valentines Day, I decided to do my one and only Valentine card (maybe) that I make each year. It's for my hubby and seeing as he is my Knight in shining armour, I decided to use an image I also used here, who would think it could be so versatile? However I couldn't think of a sentiment to match him and then!!!!! someone used the word "enamoured" on TV. A little change in the word and it became my sentiment, well he has armour!  I looked up Google to make sure I was using the word correctly, they say I should use "of you", I would have used "with you", but I wanted to be correct. I wonder what you would have used?
Anyhow, I took the digital stamp into my die cutting machine, as I normally do, to cut him out 3 times for a good strong layer. I then coloured him in Distress Inks and added Clear sparkle pen, for his armour to shine.
I searched for armour paper or something to do with Knights in my files and came across this perfect paper, it has arrows, they had to be fired onto the heart by English Long bows. Didn't they? They were known as the best in Medieval times!
I then printed out the background and the sentiment piece. I decided to make the heart of the paper into a shield shape and make it 3D. I intended to cut it with my Cameo, but I shut down everything before cutting! duh! so I set about fussy cutting. It has a narrow border, I added it with 3D pads. All finished and I have to say I think he will smile at this.
Knight - QKR Stampede
paper - Digi Dewi from 2014
Distress inks - Gathered Twigs, Barn Door, Hickory Smoke
sentiment - mine!
sparkle Pen - Crafters Companion
glaze - Nuvo Crystal Glaze 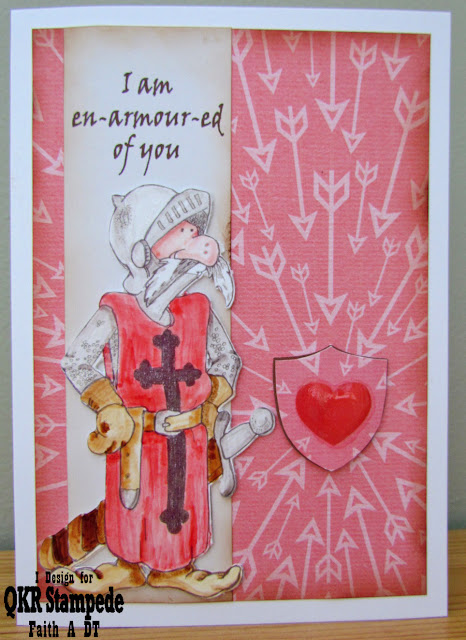 here he is in his shining glory?
I used 3D glaze on the heart with sparkle added to it with the sparkle pen. 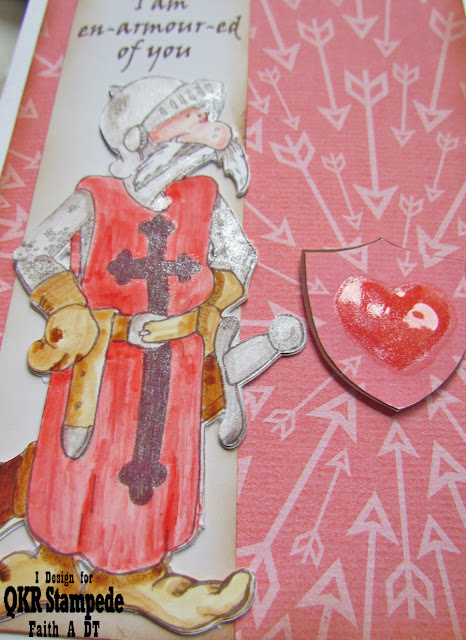 Oh I love it Faith, the image is fabulous, he has so much character and the sentiment is a great play on words.xx

Fabulous design and love the arrows going towards your fussy cut 3D heart. Fun sentiment and yes the knight sure is versatile Faith x.

What a unique idea for you Valentine's card, Faith. Love the heart on the shield and that little knight! Great job!

Absolutely fabulous! Great image and such a fun design. xx

So cute, Faith. I would never have thought to use this image for a Valentine card. It is perfect for the occasion.

Fabulous card Faith, so clever how you did the shield with the heart. CarolG

You are so creative, Faith! I'm sure hubby will smile & will love it!

Oh I love when a card comes together! And this one is PERFECTION!! love that paper and love love how you did the shield with the heart!!!

I love how your mind works and the little things that inspire your creations! This is just brilliant!! A totally cute and fun valentine!

LOVE, love, love it, Faith! How creative to use the knight for a valentine. :-D

Another really fun card, Faith. You are so good at creating punny cards.

Fabulous idea Faith, I think the sentiment is a perfect match as is the backing paper xx

Oh Faith!! This card is absolutely fantastic! Such a clever play on words too. I always thought it was "enamoured with" as well so thanks for the language lesson!

Oh now I got another chuckle, you are too funny! Yes, I hear you on the grammar quandry, but 'of you' is correct. Apparently I had it drilled into my head at some point because when I think the phrase I put emphasis on the 'on', lol. Perfect paper and cool center heart shield. Oh and so sweet hubby's still your knight. We are both very lucky to have such wonderful partners, xoxo

Haha, this is brilliant and a perfect valentines pun! Vicky x

Very clever and fab design on your great card, Faith!