75 years old, but whose counting?

Hi Everyone, my card today is for my "old" friend who is now 75, she is 6 months older than me and it's been a joke for the last nearly 60 years, so of course I HAD to remind her how old she is.
I had used this kind of sentiment before and I know it's used in blogland, so I just worked out how many days her 75 years would be. Then after I sent it, I was thinking about the numbers for some reason and realised I hadn't used the leap years, it should have been 27,393 - drat! Silly me! OH! Well, I hope she doesn't work it out and realise I made her younger. 😁 It's as I said "whose Counting".
I started with the die cut, not really sure what I was going to do, then coloured it in DOs, I layered it onto gold mirror card, after sizing it to fit an A5 card. I added a corner piece from the off cuts of the die and cut a piece of  gold card with a stamen die, it sort of looks like a flower?
I looked for a digital image, as I wanted something funny and chose this fun image.  I printed it out after adding the sentiment in Photoshop.  I coloured it in DI's the same colours as the leaf die cut.  Then die cut it and inked around the edges. I added a die cut sentiment in gold card. It gave her a laugh and no she didn't work out the days! Whew!
leaves die - Tattered Lace
image - Bugaboo (I miss them)
fonts - Tox Typewriter, ArabBruD, Aescudos.
circle die - Tonic
inks - Distress Oxide & Distress Inks
sentiment die - Card Making Magic 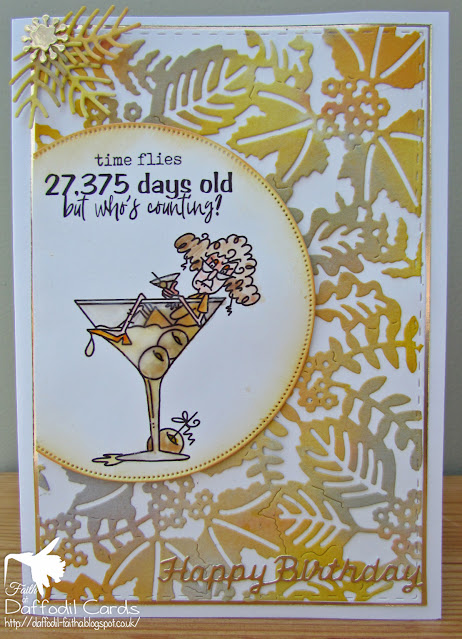 Such a good friend and such a fun card. I am sure she will appreciate this with a big smile.
Love this image and the background and the colors heme is beautiful, Faith.

Great card; love it... made me lol. WakeyL

Hi Faith, you made your friend younger for 18 days! Well, she is still older than you! Ha Ha! Great card, sweetie. I love the funny image and the fabulous background. Kisses!

Hi Faith this is fabulous and your long time friend will surely love it.xx

A super card Faith, a fun image and great sentiment - I'm sure she will appreciate gaining a few days.
Pauline - Crafting with Cotnob
x

LOL so funny - love your card and image and beautiful background die thanks for sharing!!!

Pretty blending of the colours, love the fun image and your explanation of the 'days' made me chuckle Faith x. Such a fun and thoughtful card for your friend ......who is older than you! x.

A super fun card. Your friend will love it and get a chuckle out of it.

Brilliant card love the image and I am sure your friend will love it. Alison x

I love this image, such fun and what a super design, a fabulous sentiment too. I think she'll have a laugh, Kate x

What a gorgeous birthday card for your friend! Such a fun image with the lady in the martini glass, lol! Beautiful leaves in lovely color! Fun card, love it!!

What a great card for your friend. I love the dies you used and of course who doesn't love a good Bugaboo image. I still can't believe they've stopped their challenges and closed up the store. I'm in denial still. [Bunny]

Great card with lots of chuckles! I got you both beat at 77, but who's counting? LOL

What a fabulous card Faith. I love the image and the brilliant sentiment and the layout with the die cuts is lovely xx

She is going to love this! Love everything about it - wonderful humor.

Faith, this is a beautiful card and funny, too! And monochromatic to boot! Love the leaves background and accents, the perfect shades to choose for Stella and her martini as well. I'd be pinching myself if I'd made this, as mono and cas cards are my hardest to do - Brava! xoxo

SUPER card for your friend Faith.

Thanks for your lovely comments on my own blog and the Snippets Playground.

This is gorgeous. I love the colours you used , it's so perfect for an autumn birthday and a bit of fun too.

What a brilliant card for your friend Faith! It's really beautiful but also funny which is the perfect combination and I'm glad it gave her a laugh. Vicky x

ROFL - Love, love, LOVE that sentiment, Faith! Great choice of die cuts and I love your autumn color combo. (I miss Bugaboo, too.)

Haha, I love this card Faith! Right, who's counting....you did better than me, as I wouldn't even have considered the leap years! Loving the background die you used and love how you colored it in. How fun is Martini Stella?! I love this image so much, she always cracks me up. I love how you have colored her too! Well done on this one, but then again, you always do a great job on all your cards! Hugs, Brenda

Great coloring on the image and the die cuts! I had to laugh at your description of the calculation and how you made her younger.
Hugs Monica

So very funny - a great card for your friend - I do the same thing to my older sister - in stating "she will always be older than me" hehe - like age has anything to do with - just saying - your friend is blessed to get a cool card like that! Have fun crafting!

Oh how fun! This Birthday card would surely make me smile!