Hi Everyone. A second post from me today just to keep you updated about my Grampa's poems. With a few piccies. You can skip this if it doesn't interest you!

I had a museum curator come to see them a few days ago, he said he wondered how Grampa had slipped through the net and not been acknowledged for his poems, there are very few poems written about the coal mines by actual miners, which he was. The Curator also said his museum couldn't do them justice and as there are so many, he is going to search someone out, someone who will be able to do them justice, as they will need cataloguing and be rewritten. He said to continue writing them up as I'm doing.

Just to know that someone outside of the family appreciates Grampa's writings was an enormous lift to me. I thought you may like to see a little of what I have.
The blue folder is his writing of his life, that I have typed up. The old case is full of note books and paper with his writings on. 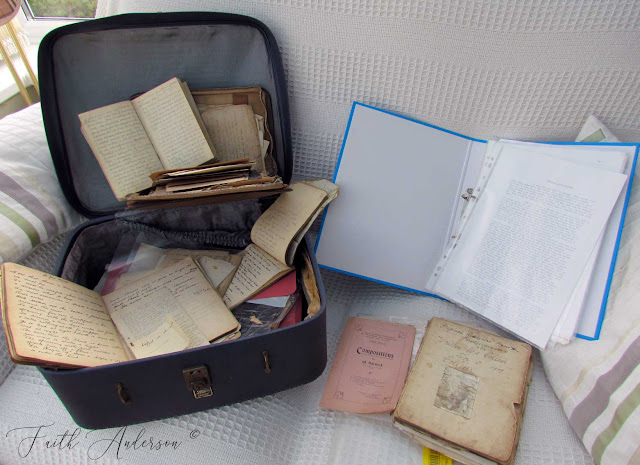 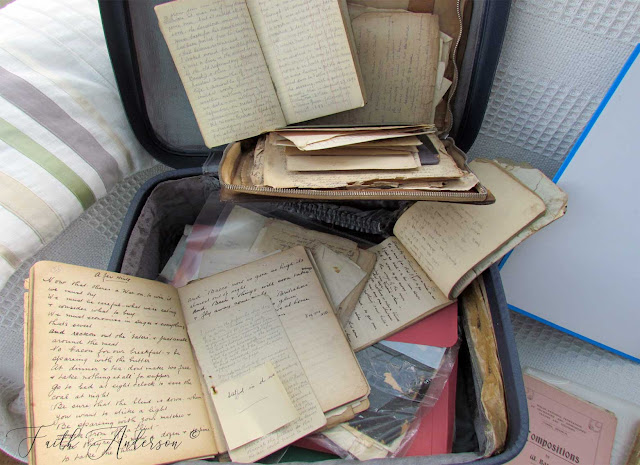 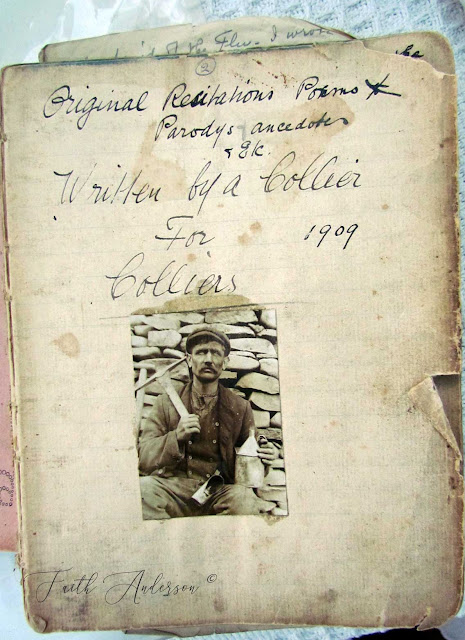 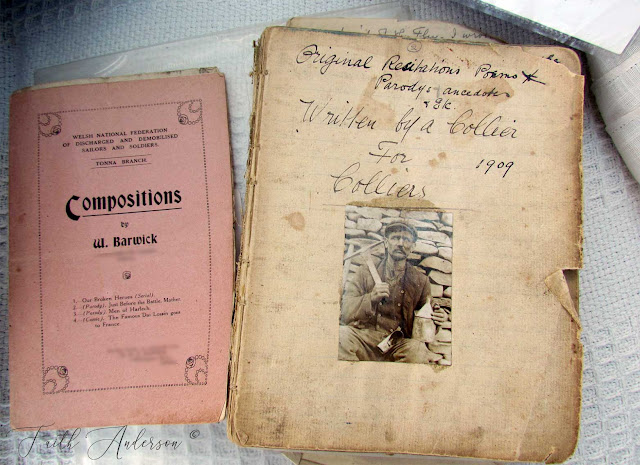 The pink book are the only poems he had published.
Some poems are dated 1916 and 1917 about the tragedy of the soldiers and their treatment when they returned home.

first verse of one of the poems, there are 6 in total.
Our Broken Heroes
Only a broken soldier, now thrown aside as "scrap"
After fighting for King and country, and now, who cares a rap.
What will become of our heroes? Shall we leave them to die in despair?
It's a shame the way their treated, after doing their bit out there.

I haven't gone on as it's such a sad story. I don't want to leave you with sadness. However he does have a funny side to him too. This was written during the Second World War. There was a campaign for people to "dig for Victory" as there was a food shortage.

I’m in the Spring #39
The birds, yes, they whistle and sing,
The lambs they gambol and jig,
And I go to the garden and sweat, oh! Beg pardon,
For it’s my lot, on my plot, to dig.

The dock leaves are showing up fine,
Their roots are so deep and so tough,
I follow them down and tear up the ground
In an hour I have had quite enough.

I sit down to rest by the hedge,
That blackbird is singing a treat,
While I’m cleaning the weed, for sowing the seed
And digging up worms he can eat.

But I mustn’t give in, now I’ve started,
I must oh! My back – have a go,
Or my neighbours, will think I am lazy
Of my pain in my back, they don’t know.

Twas old Adam that started this nonsense
And alone is to blame,
As he made his garden in Eden,
We are expected to do the same.

Faith, I think you would consider to publish them in a book. Your grandfather's poems are great. And I love the vintage papers! Kisses, my friend.

That's fabulous news Faith, you must be so proud.
Pauline - Crafting with Cotnob
x

Wow beautiful poems thanks for sharing!!!

Faith I was thinking of you and the the visit. What glorious memories you have and thank you for sharing the poems, both sad and funny. Thank you too for sharing the photos and keep us updated as to where this story will be continually unfolding.....There is more to come I am sure x. Sending hugs x

What a treasure you have there, Faith.
Maybe one day they all will be in a book with your decorations!

What a fabulous legacy and hope they are treated with the respect and honour they deserve,The one about the broken heroes could still appply today!!!
Carol x

How wonderful Faith. You must be so proud. I love the poem about him digging! Such a vivid picture of him, with his aching back, but still he digs, acknowledging the song of the blackbird.

I think it's amazing that his writings have been kept for all these years and that someone wants to share them with the world. What a treasure trove of memories you have there, hand-written by someone with a real talent for poetry!

I just think this is the neatest thing ever Faith! I love the suitcase and all the old papers and notebooks! They should be preserved so they don't crumble as they keep aging, definitely should be in a museum somewhere! Your grandfather was a talented man and his soldier poem is still true today with our brave soldiers. They are what keeps our countries safe but they never get the help they deserve. At least in the US they don't, we have many homeless soldiers and that just isn't acceptable. Yes, your grandfather's writings should be published and made available to all in your country, he was a wise man. So I'm glad this curator is going to search someone out that will be willing to do all these wonderful poems justice! Hold your head high Faith, that was YOUR grandfather! Hugs, Brenda

Yay found your blog at least, don’t understand Google+. What a fantastic poet he was, love the poems. Thanks for all your lovely comments

An incredible treasure & so wonderful they will finally be recognized outside your family!

Faith, this is such a treasure! I really enjoyed reading this post and it did make me shed a tear, but I love the way you finished the post with the Spring poem!!