Hi Everyone, my card today is for the Outlawz sketch challenge, one I haven't done for a couple of weeks due to a "senior disorder!" - forgetfulness of what day was what. LOL.

Anyhow on to my card, I took one look at the sketch and just knew it involved my Cameo. I designed a square in the design area and added lines to be able to cut it. I also added the balloons I found by accident in my files with the cupcake, which then set the theme of the papers. It really was meant to be, it was put together in minutes, of course it took longer to make. I Print and cut with the Cameo added an outline to the balloons and the cupcake, then 3D'd them.

Then after I had added all the elements to the cut frame, I went to add it to the card base and somehow, goodness knows how, I had made one side bigger than the other????? so I had to cut top and bottom off to fit the card base, I think I got away with it? I then added the birthday sentiment cut from the same floral paper and with 3 more layers to give it depth and added it to the top, a few sequins and it was finished. I don't know why my photos have a wonky element to them, the cards don't. 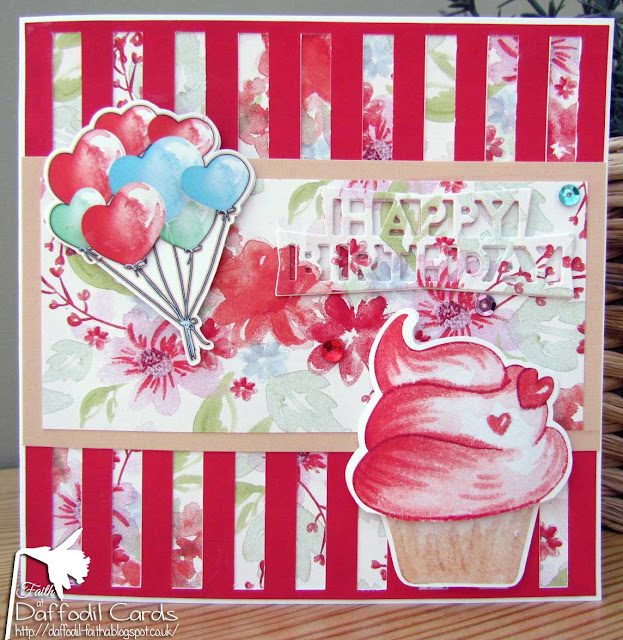 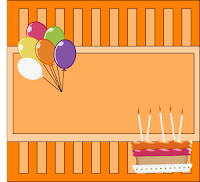 Our front garden on the 19th October on a dismal day, just before hubby took all the flowers out to plant daffodil bulbs, seems such a shame to spoil the show, but it is extraordinary to have it look like this so late in the year. 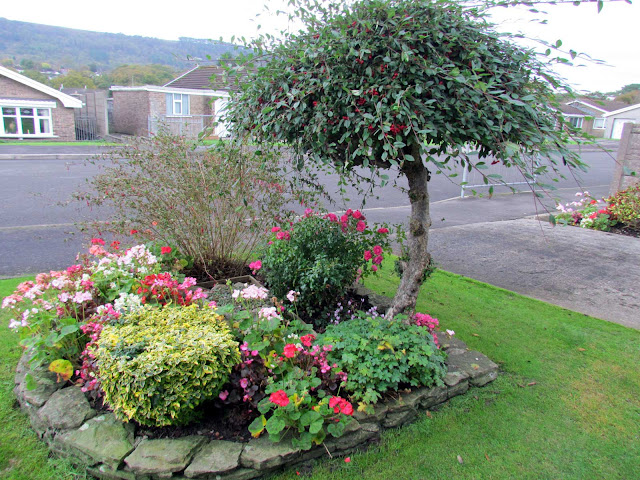 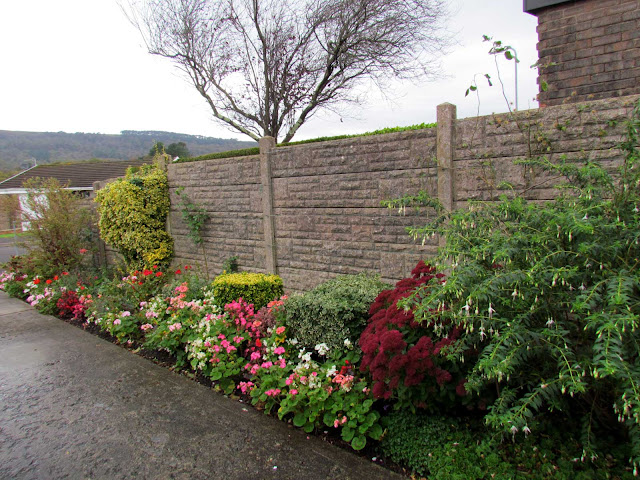 Faith, your card is gorgeous. You really did a great job with following that sketch. Wonderful pictures that is gorgeous.

Fabulous, beautiful card and I love the pics of your garden.
luv
Debby

Your card is gorgeous, Faith, such cheerful colours! What beautiful flowers, too - it's such a shame they have to be dug up, but before you know it the daffodils will be in bloom! Take care!

What gorgeous photos of your garden and I bet a lot of work keeping it looking like it. Colourful and delightful card. Clever use of the cutting and the most perfect interpretation of the sketch. Those balloons look great, as does that yummy cup cake...Yes sometimes my cards look a little wobbly when I post them, don't know why either x

A gorgeous card Faith, I love the colours, pretty papers and all of your super details.
Your garden looks beautiful, I don't think the gardens know what season it is anymore - we still have runner beans and courgettes in our garden.
Pauline - Crafting with Cotnob
x

Such a fun card! Love the whimsical design! The colors are so bright and cheery - in both the card and the garden. I pulled some of my annuals out too over the weekend, but we are still experiencing summer temps. here too. As you say, it seems a shame to pull them, but the bulbs do need to go in!!

Super card, Faith, love the colours. TFS the photos of your garden, what a fabulous display of flowers. xx

Great card Faith, good to see you are making good use of your Cameo. You really do have a lovley garden, I am very envious xx

Scrummy card, love those stripes over a floral - great layout. Your garden looks wonderful. One thing I can never be bothered to do is swap out bedding plants! shrubs for me.

fun and elegant at the same time...so pretty...
Love seeing your beautiful garden, you have a green thumb for sure!
xx Karen

Such a pretty card love the colour Faith and oh my the garden looks wonderful ..We have so many plants that have gone on and on this year and still going strong...huggles Sue xx

Your flowers and plants are just so well manicured and a feast for the eyes! It's like a little slice of paradise! Great job on the fun card too - and a great save for the little boo boo! No one would ever know :)

Ohhhh, your gardens really do look so lovely! I have a few mums left but otherwise, everything is done for the year now.

Your card is wonderful! The papers are so pretty and I just love that cupcake!

Your card is wonderful, but this time i love your garden more. What great colors.