It's time for a new challenge at

My DT image is lbhello.  Now I hear you saying a ladybird (bug) is normally red and black, well it's PS land, so it can be any colour and today she is blue and yellow! My initial thought was a CAS card as the image lends itself to it, then decided to have a look at my sketch files and chose this one by Graphicat 2013. 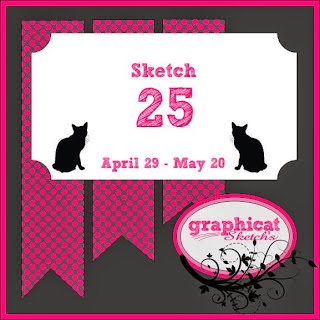 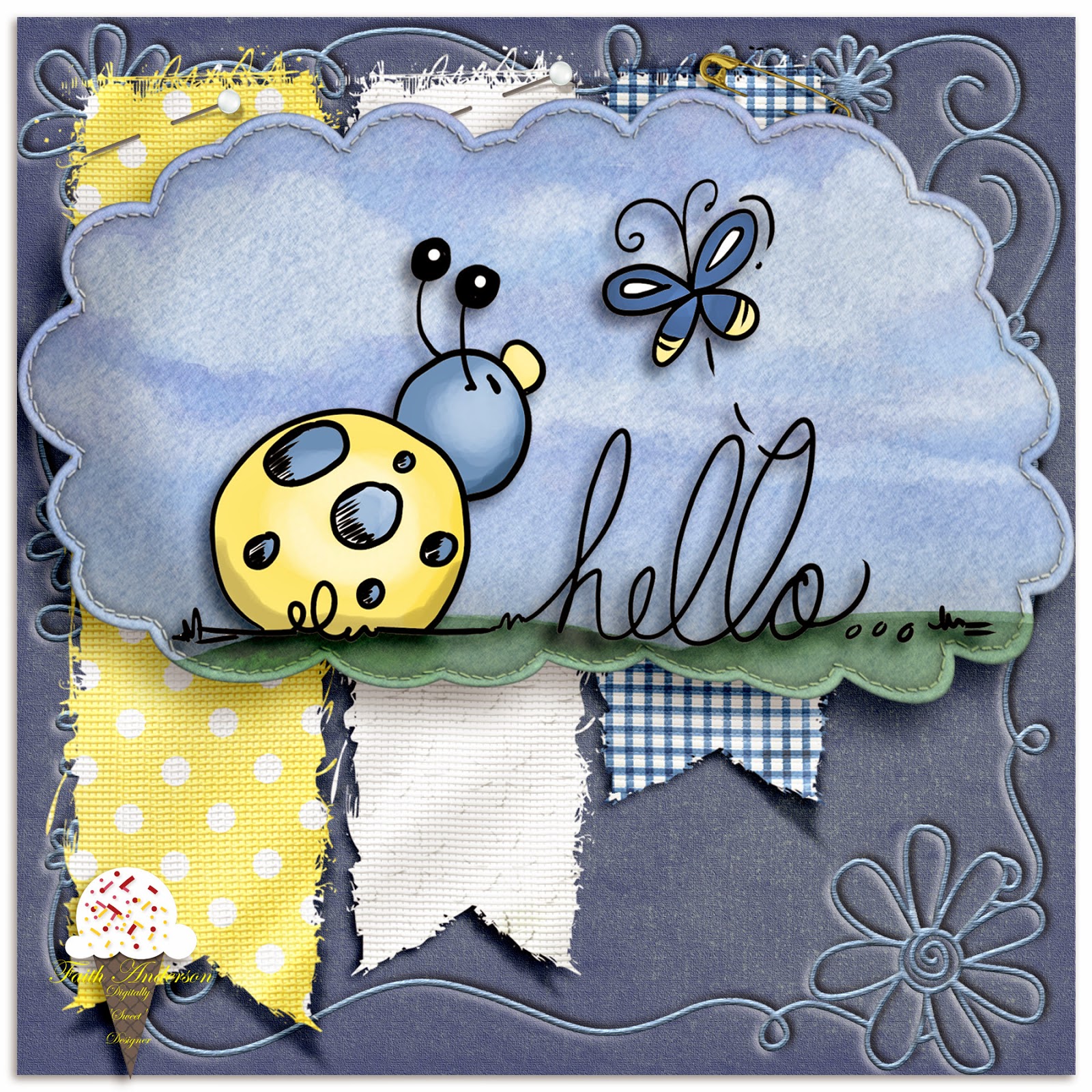 I did lots to this, including, the custom banner shape files by HG designs were linked to DP's from a digi kit Denim and Daisies by Just so Scrappy, into material with an Atomic Cupcake action.

Now onto my image and it's "cloud".  The shape is from a Digi kit Nerd Herd by A. Bloom. I overlaid it with a background by Gina Jane Johnson so it had clouds in a cloud! then added the Bugaboo Hello and coloured and shadowed it.  It's such a sweet image.

I suppose I could go on with what else I did, but I expect it would bore the pants off most of you so I'll end it at that.  Hope you like it.

Here it is printed and layered and 3D glossed. 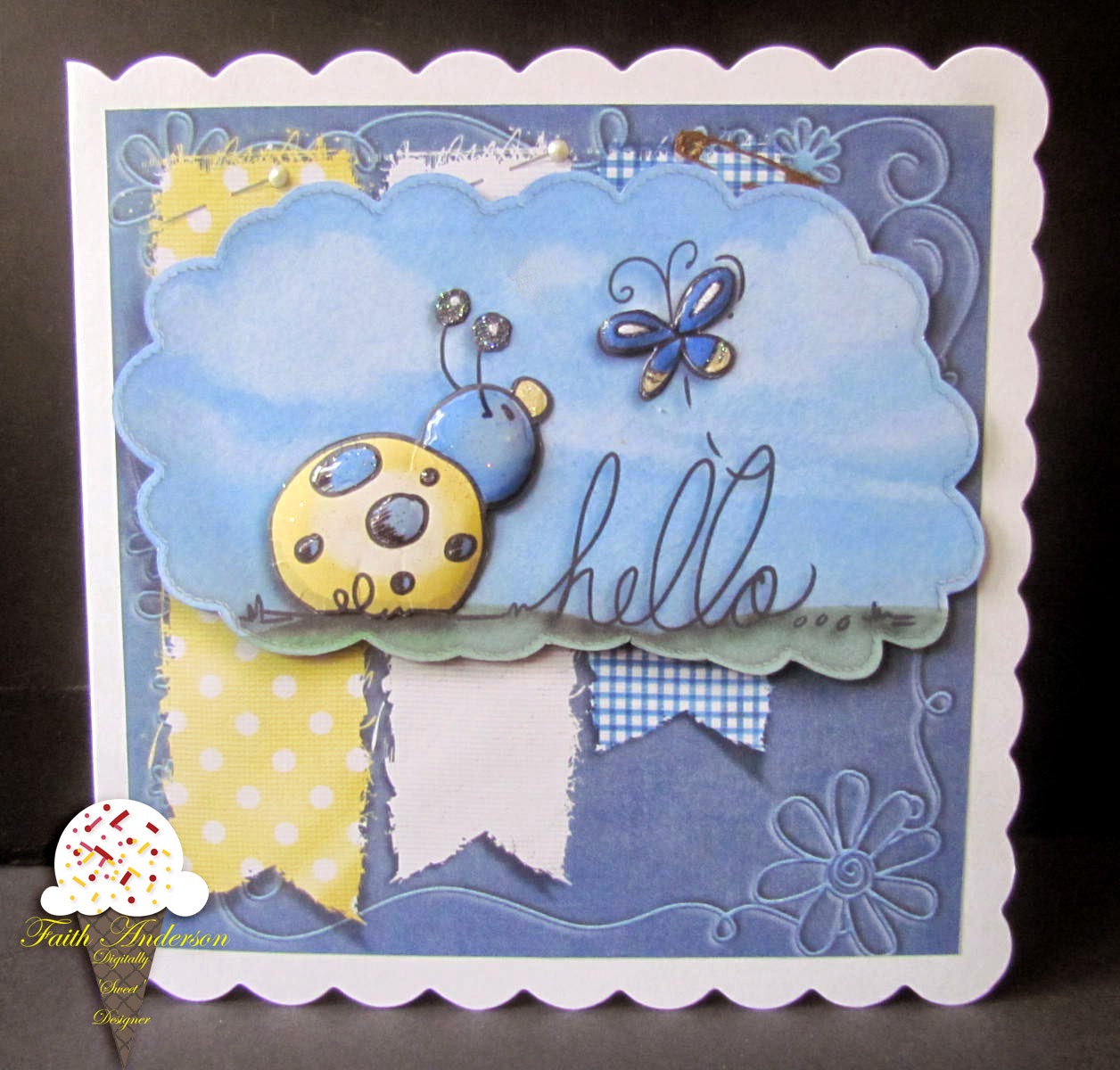 http://colourmecardchallenge.blogspot.co.uk/2014/05/cmcc20-colour-me-striking.html  Hope these are close enough to the colours requested.
Posted by Daffodil Cards at 12:00

Such a lovely card Faith, I love the cute ladybug too.I am losing weight, then I stay the same, then I start losing again. It's not a short race it's a marathon, keep at it and you will lose again :) Viv xx

What a super darling creation! LOVE that sweet little bug! Thanks for joining us at Doodle Pantry! :) HUGS and happy weekend! Mynn xx

Aww! I love the ladybird in blue and yellow, it looks so sweet! Gorgeous card :o) Hugs, Lisa x

Gorgeous project, the colours are fab and such a cute image too. Thanks so much for joining us at Polkadoodles this time
Claire xx

Oh how cute the ladybird is! She's very smart in her blue and yellow! I love all the details and texture on your card, too - how clever to do it all in digi format! That is definitely not my forte, I can only admire the talented people who can do that!! A beautiful card, Faith!

Beautiful! I love the colors of your ladybug, but was blown away when I read how you did the "fabric" pieces! They look amazing! I'm so happy you joined us for the Doodle Pantry challenge! I hope you will join us again soon.

Wow Faith! I love these colours together. It's a fabulous card, and cute too! Hugs, Gill xx

Super sweet focal image - looks great against those wonderful banners. Thanks so much for joining us at Colour Me...!

hello faith!! you happy to see you playing along with Colour Me!! your card is so very fun and a lovely take on the combo!

Hi, A lovely card, love the image and the pretty colours. Thank you for joining Crafts Galore Encore this month. Good luck and we hope to see you again soon.
Hugs Erin DT x

Love the ribbons on this and the embossing.
Linbyx

This is adorable and you amaze me with your digital cards! Wow!

Morning Faith . . . oh my goodness I just LOVE this card and that colour scheme. BRILLIANT!

Oh my goodness this is adorable!!! Love the tattered banners :) Thanks so much for taking the time to share with us at Colour Me...! We sure hope to see you around again soon!!!

Love your card - especially the bug in the cloud. It all sounded very complicated to make though!

I love the color of the ladybug and you can color it the way you want anyway! Love how you did the sketch!

Oooh how sweet, love the colours and layers you chose! Thanks for joining us for DPDC#46 hope to see you again!

Actually faith I need you to come and explain it to me it doesn't bore me I just wish i could do it ! Great take on the sketch and beautiful work as always.

Wow, I have no clue what you were talking about, but the end result is gorgeous! Thanks for sharing with us this month at Doodle Pantry.