Hi Everyone, I have 3 DT cards today, this is for - 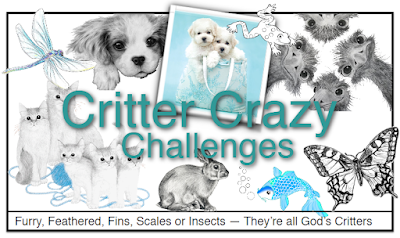 although the rules are slightly different, we still have the same challenge
Anything Goes but they MUST feature a critter as the main focus
Whether Furry, Feathered, Fantasy, Fairytale,
Scaly, or Insect, there must be a critter...
I have tried to do mostly one layer cards for Christmas this year, last year I was charged to much for the post! My cheapskate part of me took over!
My card is using the cutest penguin, I added the lights to him digitally and deleted part, so it looks like they are behind his head and I had him stand on an ice cube. I added a background that has pale snowflakes in the image then added the sentiment. I printed it, then added clear glaze to the lights, his eyes and beak and some snowflake dies from mirror card. I didn't want to add another layer under it, so I went around the edge with a glue pen and added silver glitter. A nice light-ish card for posting.
penguin - Creative Fabrica
lights - LouCee Creations
background - SnickerDoodles
ice - Amanda Creations
snowflake dies - unknown
glue pen - Quickie Glue pen
glitter & clear Glaze - Nuvo
Mirror card - The Range 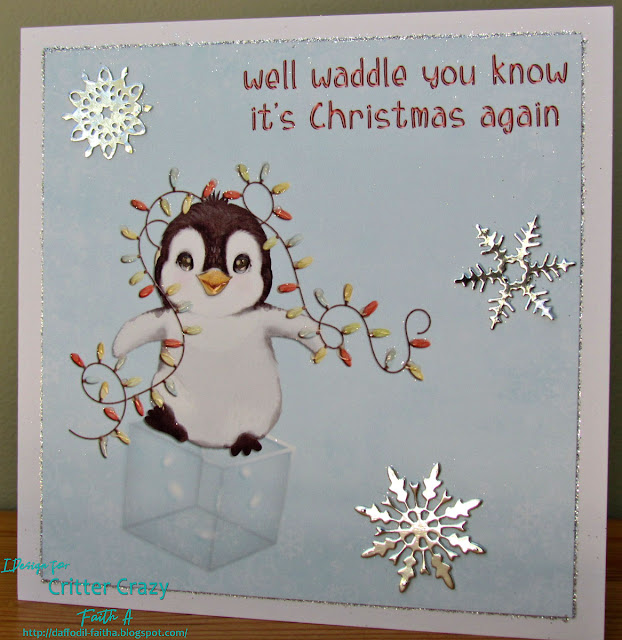 Hopefully you can see the shine on the lights and the face here. 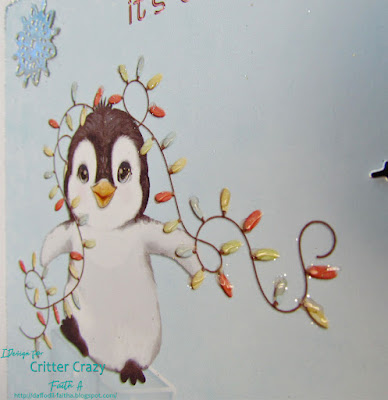 Love the gorgeous penguin and great fun sentiment-tell me about postage charges I posted a birthday card only local with first class stamp took three days and ended up been late!!!
Carol x

That's a great one layer card, and the sparkle of the silvery snowflakes is just as pretty as the shimmer on those lights! Super cute card!

Soooo cute - love the image and sentiment thanks for sharing!!!

A super card Faith, such a fun image and sentiment.
Pauline - Crafting with Cotnob
x

So bright and cheerful and another fab sentiment from you too.

WOW, Faith, great editing work on the image! I have no idea how to do any of those things. Wonderful card.

OMG.. this is so super cute! I really love it!

Oh he is so cute, Faith! Great digi editing there in creating the little scene. I love the ice cube for him to stand on.
Hugs Monica

Perfect for a Christmas card! Love the image, also your snowflakes and glitter around the paper's edge. xoxo

Caught up with all your fun and fabulous DT, design creations and thank you for all the amazing inspiration Faith x. Such a fun sentiment on your adorable penguin card x.

I do love a one layer card Faith and with clever touches like your sparkly frame, the clear glaze and the die cut snowflakes, there's plenty of dimension here! A fabulous card! Vicky x

How cute this is, Faith! And what a perfect sentiment to go with the sweet image!
Thanks so much for joining in at my Crafty Wednesday challenge this month where the theme is "baby, it's cold outside" or "anything crafty goes".
Ellie
Ellibelle's Corner

Penguins are always cute and your card is great. Such a fun sentiment.

Oh so cute, Faith! I love the added glaze & glitter!