I was asked to make a bag for a work colleague, who wanted to give something different to a friend on her Hen Party and as it was to be held in Benidorm it had to be mentioned.

Here is what I came up with, as I had one evening to do it, I hadn't got time to really think a lot out.  The image is by Carolee Jones and I had it at PC crafter quite a few years ago.  I downloaded a Spanish Matador hat and put it on the hen and chick, added balloons and the year, hope it doesn't look too like 2021 instead of 2012.  I then added a saying I came up with, I'm pleased to say it went down well, and quite a few people had a laugh, that's what it's all about in the end isn't it? 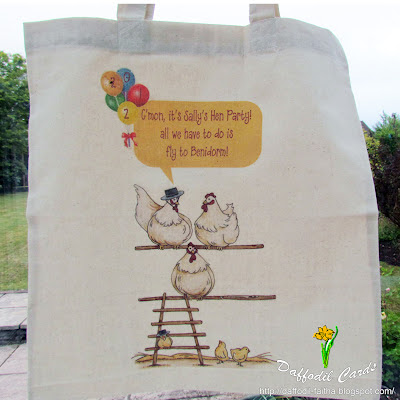 Faith this is brilliant. Love the chicken in the matador hat - really funny.
Hugs
Denise xx

Fabulous Faith, well done I bet she loves this , what a great idea.
Hugs Elaine

Looks great and well done on doing it in such a short timescale. Why do people wait till the last minute to ask!
Linbyx

How great! It is just perfect Faith!

This is just brilliant Faith and at such short notice too! Vicky x

This is a great bag, Faith! Those hens are just fabulous. Great idea. :) Ann

Oh hun, this is just so TOTALLY chicktastic! It made me howl with laughter at the thought of those fat hens trying to fly to Spain. An absolutely brilliant project, you are such a star! Hugs Sxx

Cool! You're so clever with these requests. x

Hola Faith, OOOOh Faith, this is !!A FANTASTIC WORK!!!!, I LOVE IT!!!i think to much work:D, sure your friend love this henbag:D.
Clever!!!!.
Thank you for all your comments last weeks, i'm glad to "see" you every week on my blog:D.
A warm hug from the cloudy island

Hi Faith wow !!! Stunning !!! There are no limits to your talents my dear ! What a fabulous and very creative bag I love it and I bet Sally loved iot too.